The Power of Hanuman Chalisa

Amongst the pantheon of Hindu Gods, the great favorite with devotees is Hanuman, the powerful deity who is the commander of the Monkey Army in the Ramayana and the greatest devotee of Sri Ram. What many may not know is that Hanuman is the incarnation of the mighty Lord Shiva. 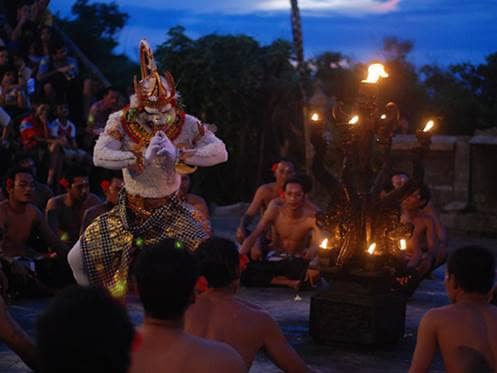 Amongst the pantheon of Hindu Gods, the great favorite with devotees is Hanuman, the powerful deity who is the commander of the Monkey Army in the Ramayana and the greatest devotee of Sri Ram. What many may not know is that Hanuman is the incarnation of the mighty Lord Shiva.

Children who have listened to the Ramayana love him f or his great strength and valor. The stories of his adventures in the service of Lord Rama are endless: he could transform in size from miniature to gigantic, fly across oceans and planets and as a child, even grabbed at the mighty sun, thinking it to be a golden fruit for him to eat.

While children love his exploits, all Hindus worship Hanuman for his undying devotion to Lord Rama. In fact, images in popular literature show him ripping open his heart to reveal Lord Rama and Sita within it. Hanuman is so close to Rama that you will find him in every Rama temple, never far from his Lord. Hanuman bhakts (devotees) worship him also because he is a sure way of reaching the Lord’s ear, and the Hanuman Chalisa is one of the most potent and powerful mantras chanted by devotees in times of joy and times of grief.

In the introduction of the Hanuman Chalisa (English translation – Nightingale) Hanuman “the guardian to the gates of Lord Rama’s divine kingdom is often believed to be a ‘guru’ or teacher in his bringing together of Lord Rama and Sita like the joining of an individual soul with the divine.”

It is said that Lord Rama had assured Hanuman that he will be present in every Rama temple and gave him the boon of immortality (Chiranjeevi): “Hanuman is the link between devotees and god, for on the Lord’s behalf he serves, inspires and protects his Lord’s servants.”

The Hanuman Chalisa is one of the most beloved texts of Hinduism and consists of 40 verses (40 is chalis in Hindi) in praise of Hanuman. It is written by Tulsidas, who is also the author of Ramchaitmanas or the Tulsi Ramayana. In it, Tulsidas describes the importance of Hanuman:

You are door-keeper to Rama and without

your permission nobody can have an entry

Under your refuge one gets all comforts and

happiness. There is no cause of fear if you are

All the bodily diseases are expelled and all

pains removed if somebody makes constant

The Hanuman Chalisa is a talisman against life’s vicissitudes and also features prominently in the death rituals of Hindus. This verse shows the value of listening to the chanting of the Hanuman Chalisa when the soul departs the human body:

At the time of final departure such a

person goes the abode of Rama and

after that wherever he happens to take birth,

he will be known as a confirmed devotee

A person even though he may not pay any

attention to any other god, enjoys all pleasures

All the crises vanish and all pains are removed

if somebody remembers the mighty Hanuman.

master, be as graceful to me as my godly preceptor

Hanuman’s lineage and his exploits are all a part of the epic Ramayana in which one sees with what single minded devotion he served Sri Ram, be it in carrying back the mountain with the magic herb to cure Lakshmana or in searching for Sita across the oceans when Ravana the Demon King carried her away. Every act of his was a devotion to Sri Ram.

Hindus can also draw inspiration from Hanuman as the perfect devotee, and can all aspire to follow his example of undying devotion and sacrifice, and always have God in our hearts. There is a wonderful story of how Sita rewarded him with a pearl necklace for his devotion. He chewed on each pearl one by one and threw each away – because none of them had Sri Ram in them, and anything without Him had no meaning for him.

As the English translation of Hanuman Chalisa explains it, “Hanuman practiced service as a form of worship through which one can realize God as can be seen in the numerous acts of service to Lord Rama. These acts prove how selfless and devoid of an ego Hanuman was and how deep his devotion ran. All of Hanuman’s words, thoughts and deeds were offered to God. When these three work in harmony, the grace of god is won, just as Hanuman succeeded in acquiring it.”

For Hanuman worshipers, Tuesday and Saturday are special days when they visit Hanuman temples and offer their devotion to him, by smearing ‘sindoor’ and butter on him. He has the power to make the impossible possible and so devotees wear the Hanuman taweez or amulet to get immunity from evil. Devotees chant the Hanuman Chalisa to ensure that Sri Hanuman keeps us safe and secure through life’s ups and downs.

As G. Venkatesh explains in an article on Boloji.com, “We pray to him for giving us physical and mental strength, to ward off the negative/evil influences from our lives, to obliterate our timidity/cowardice and to sharpen our intellect. When we pray to Lord Hanuman with a pure heart and an unshakeable faith, he is sure to come to our rescue.”

Lavina Melwani is a New York-based journalist for several international publications. She blogs at Lassi with Lavina - www.lassiwithlavina.com Follow her on Google +.