Rakhi: The Festival of Threads

Renewing the bonds between siblings is a welcome festival! 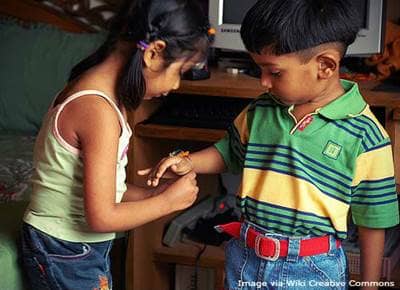 One of the most anticipated festivals in the Hindu calendar is Rakhi or Raksha Bandhan, the Festival of Threads. This is the day when brothers and sisters renew their bonds and sisters receive money and gifts from their brothers. Now which little girl can argue with that? Lucky are the sisters who have several brothers!

Indeed, if you are Hindu and have a brother, no matter where you are, you will try to meet up with him on Raksha Bandhan which falls this year on August 29. This is an ancient Hindu festival which occurs in the month of shravan on the full moon. Sisters pray for their brothers’ health and well-being, tying the sacred Rakhi thread on their wrists, and brothers pledge to protect their sisters.

It is said that Lord Krishna formed this brotherly bond with Draupadi when she tore off a piece of her saree to bandage his cut finger, and he was always there for her when she called for help. In the Mahabharata epic, one learns that when she was being disrespected by the Kaurava princes who were trying to disrobe her, Lord Krishna saw to it that her saree was unending, thus honoring her modesty.

On Rakhi, sisters prepare a tray with ceremonial items and sweets and pray for the welfare of the brother, placing a tikka on his forehead and tying a bracelet of silken threads on his wrist. The sister feeds him sweets and the brother gives her a gift of money, clothes or jewelry, pledging to be there for her always. Families continue the tradition through the years and often you see brothers and sisters, in their 70's, observing this ritual and renewing the lifelong bonds.

Indeed weeks before the festivals, the bazaars in India are ablaze with the colorful bracelets of silken threads, bonbons and sequins, and rakhi shopping is a must, along with sweets for the occasion.

From London to New York, the Indian markets in ethnic neighborhoods bloom with rakhis, jeweled bracelets of tinsel and sequins. Indian migrants have brought this tradition to the countries they migrated to and many 2nd and 3rd generation Hindu children also observe this tradition in spite of having grown up in foreign lands. Earlier migrants recall that they had to be creative and craft their own rakhis but now the Indian stores in many American cities are bursting with these shining talismans.

In today's day and age, online stores have sprouted up and rakhis can be ordered online too and yes, there are electronic rakhis or e-rakhis sent by thousands of sisters to brothers across the world. Many years ago, brothers and sisters parted by many miles would use the postal system, pushing the rakhis into an envelope and sending it half way across the world to a loved one. Now it's been replaced by all these different versions - but the sentiment remains the same.

The rakhi has also become a symbol of caring for those who are not in the sibling relationship. Women will often tie a rakhi on males with whom they have a platonic relationship, making them their 'rakhi brother'. Children and workers also tie it on older people and authority figures - often schoolchildren descend on the prime minister's office to tie rakhis on the Indian prime minister - till his entire arm is festooned with these festive bracelets!

The sentiment of Rakhi - that of caring, great love and a pledge of protection - remains unchanged and even strengthens over the years. Bollywood songs often refer to this pledge between brothers and sisters with many tear-jerking songs and there's even an entire film devoted to these sentiments titled 'Rakhi'.

Each year a fresh group of children get initiated into this brother-sister bond. One wonders, will the sentiments change over the years? As gender roles change, will both sisters and brothers tie the rakhi on each other and give gifts to each other? I recall one independent little girl saying she didn't need protection or gifts. After all, in a perfect world, both males and females have the power to love, protect and pray for each other!

Lavina Melwani is a New York based journalist who blogs at www.lassiwithlavina.com. Follow her on Twitter @lavinamelwani