In Search of Knowledge 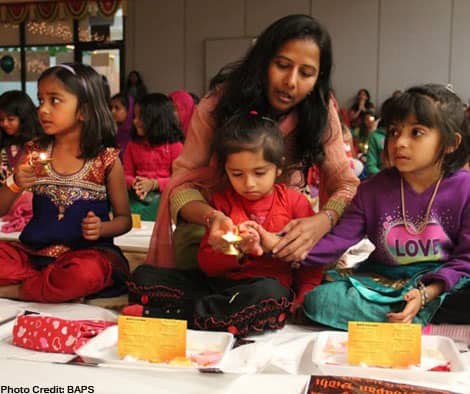 When we were young, there was one lesson we learned early from Hindu parents - a respect for knowledge. If we dropped a book by accident, we not only had to pick it up but touch it to our foreheads and our eyes in a mark of contrition.

All learning was sacred.

For Hindus, the devotion to knowledge - be it education, music or dance - is so great that a dancer, as she ascends the stage, pays tribute to the Gods. She not only salutes the guru and the musicians, but also bows down to the musical instruments before each performance.

The guru or teacher is central to the learning process. In the ancient days students were sent to live and study with a guru and that relationship was one of total submission and respect for teachers. Students lived in a gurukulam, dedicated to a life of discipline and rigorous learning.

Little wonder then that education is pivotal to the lives of modern day Hindus, and even the poorest parent strives to get their children an education. Knowledge is seen as the passport to a better life and indeed, many Indians who migrated abroad were able to do so because of their qualifications. Their children are also on that same educational path, and many of them are successful in everything from Spelling Bees to Math Olympics, going on to Ivy League universities and other places of higher learning.

The two Hindu icons who are worshipped by all those aspiring to knowledge are Ganesha and Saraswati. Ganesha is regarded as the supreme scholar and many of us have heard the story behind his broken tusk. When transcribing the Mahabharata for Sage Vyasa, his pen wore out. So devoted was Ganesha to his task that he broke off his own tusk to continue writing the great epic without interruption.

Ganesha of course has many names and in her book 'Eternal Ganesha', the writer Geeta Mehta points out that Ganesha also means the Lord of Ganas or Categories. Language, numbers and thought all emanate from Ganesha who is consciousness. Writes Mehta, "Ganesha provides the tools of recognition without which there is no understanding of cause and of effect, there is no speech, there is no consciousness."

Every Hindu home has a shrine where families daily say a quick prayer before heading out to work or to school. Come exam-time, there are long lines near the Sree Siddhivinayak Ganesh Temple in Mumbai, for a visit to the Remover of Obstacles is a must to solicit divine blessings.

As Geeta Mehta notes about Ganesha: "He is the Lord of learning, encompassing all knowledge. As such he is the special god of India's vast student population. Many students believe if they slice a closed text book with a Ganesha medallion the book will fall open at the very topic on which they will be examined, and before entering an examination hall cautious students might recite the Ganesha prayer:

'You Who are Perfect Knowledge,

Who are Absolute awareness,

Who are supreme intelligence,

The feeling that the Divine can intervene and change the outcome is always there. Before undertaking any exams, students also bow down to Saraswati, the Goddess of Knowledge, Arts and Learning. Indeed, Saraswati is one of the most loved goddesses and the legends behind her many. Dressed in white, symbolizing purity and knowledge, she holds a book , a rosary, a waterpot and a musical instrument - a lute or a veena - in her hands. All creativity springs from her.

Saraswati is especially worshiped during Vasant Panchami, which is the day of initiating children into the world of knowledge by teaching them their first alphabets. Children learn to read and write on this day, and schools and colleges observe special Saraswati puja or prayers. Everyone wears yellow at this festival, which also welcomes spring, and is a celebration of kite flying and ritualistic foods. This year the festival falls on February 12, 2016.

One of the most potent mantras that many Hindu families recite and teach their children is the Gayatri Mantra. As the Satya Sai International organization explains it, " In the Gayatri Mantra, the unity of body, mind and soul is depicted in the first line, "Bhur-Bhuvah-Suvaha." The next line, "Bhargo Dhevasya Dheemahi", means "Throw away the darkness." "Dheeyo yonah Pracho-dhayaath" means "Let the effulgence of the Divine dispel the darkness of ignorance."

Hindus believe that mantras are potent and even in modern days many teach their children to chant these prayers. As Hari Ravikumar notes in DailyO, "So the Gayatri mantra is a prayer to the Supreme, in the form of the sun, which stimulates our mind and empowers us. Just like the sun wakes us up every morning, we pray that the Supreme light wakes up our intellect. It is indeed a prayer for internal strength."

So in their quest for knowledge, many young Hindus use all the cool technological tools of the modern age - but also seek the blessings of Saraswati and Ganesha and powerful chants to remove all obstructions to learning.

Lavina Melwani is a New York based journalist who writes for several international publications. She blogs at www.lassiwithlavina.com or follow @lavinamelwani