Diwali - The Triumph of Light Over Darkness

The triumph of good over evil, light over darkness. This simple sentiment is at the heart of the great festival of Diwali which is celebrated in the Hindu Diaspora all across the world. 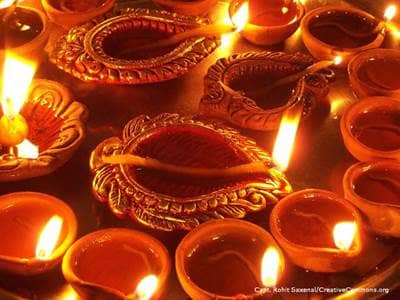 The triumph of good over evil, light over darkness. This simple sentiment is at the heart of the great festival of Diwali which is celebrated in the Hindu Diaspora all across the world.This ancient Hindu festival is observed with different nuances in different regions of India.

The great Hindu epic of Ramayana tells the tale of Prince Rama (the 7th avatar of the God Vishnu) of the kingdom of Ayodhya who was banished to the forests by his jealous stepmother Kaikeyi who wanted the throne for her own son Bharat. Although Rama was the heir to the throne, he being the ideal son wanted to help keep a vow his father King Dusshratha had made to Queen Kaikeyi that any wish she made would be granted. Prince Rama went into the forests for 14 years, accompanied by his loving wife Sita (an avatar of the Goddess Lakshmi) and devoted brother Lakshmana who insisted on following him into exile.

There, living simply and safeguarding the holy ascetics from demons, they encountered Ravana, the ten-headed demon king who became enamored by the beauty of Sita. By deceit, he managed to carry her off to his kingdom. He is followed by the two brothers and the monkey god Hanuman who is a devotee of Lord Rama.

After many trials and tribulations, Rama manages to rescue Sita and vanquish Ravana, whose ten heads symbolize mankind's ills such as anger, lust, avarice and greed. Diwali marks the triumphant return of Rama to the kingdom of Ayodhya where he ascended the throne and personified the Ideal Man and King.

Diwali celebrates this triumphant return and new beginnings, for we all fight a battle against our lower nature, and aspire to live the ideal life of righteousness and harmony.

Diwali, also known as Deepawali (festival of lights) is celebrated in so many ways - it's the Hindu New Year marked by prayers and puja, both in the home and the office, as it also begins the new year for business, getting the books blessed in prayer. It is the most auspicious time of the year when Lakshmi, the Goddess of Wealth and Prosperity, is believed to visit all homes. Houses are cleaned and painted, new furnishings are installed and the homes are lit with earthen lamps to welcome the Goddess.

Hindu families visit the temple and also conduct prayers in their home shrines. It is a time for celebration, for new clothes, new toys and finery. After the prayers families partake of rich ritualistic food with fluffy puris (bread), vegetarian dishes, fried snacks and many sweets. It is a time to visit friends and families, always exchanging home-made or store-bought Indian sweets made of milk, nuts and sugar.

Diwali is a national holiday in India and almost all buildings are illuminated with electric lights or with the more ritualistic earthen lamps. To drive by Indian villages on Diwali is to see entire landscapes of flickering lamps. The festivities begin almost ten days ahead with Dusshera which is followed by Choti Diwali and Badi Diwali - Small and Big Diwali.

According to Pew research, 79.5 percent of the population of India is Hindu while about 51 percent of all Indian-Americans are Hindu, reflecting the migration patterns. Yet Diwali is now observed by many people as a cultural holiday in India and the Diaspora, irrespective of religion. Friends get together to burn fireworks and celebrate.

'Ramleela' is a popular tradition at Diwali - a play or dance drama retelling the entire story of the Ramayana for children and adults. Whether it is a small village show seen by lantern light or a Broadway style show with all the bells and whistles in big cities, the story of Ramayana continues to fascinate people.

The holiday is the biggest commercial event for retailers as families buy Diwali gifts, clothing, electronics and jewelry. In fact a day before Diwali, on Dhanteras, families buy gold jewelry and new utensils for the kitchen, as this is considered auspicious. Diwali gifts are given to the young as well as packages of money, after the family Lakshmi Puja (ritual prayers). Sweetmakers do a booming business and there can be no Diwali without sweets!

Along with the many immigrants, the festival of Diwali has also traveled to America and it is celebrated with great energy in big cities and small towns, wherever there are Indian or Nepalese people (Nepal is the only Hindu nation in the world). During ancient times, Hinduism had traveled from India to many Asian countries and it is has many followers even today in countries from Indonesia to Malaysia to Bali in Thailand.

At the same time, Indian immigrants have taken their faith all over the world so there are Hindu temples in all parts of the world, and Diwali is celebrated from Australia to Zaire. Trinidad, where many people trace their lineage back to India, has a large Hindu population, and during Diwali, an entire Diwali Nagar or Diwali City is set up.

Besides temple visits and family get-togethers, Diwali in the modern age also has social connotations with dinners and parties in restaurants and clubs, as well as gambling parties held by friends. Playing cards is a tradition at Diwali as are social parties to celebrate the holiday season.

For several years now President Obama has been sending Diwali greetings to Indian-Americans on the big day. As the Indian-American community expands, Diwali is finding its way into popular American culture, and 'The Office' starring Mindy Kaling became the first American comedy series to introduce this holiday to the mainstream.

Last year, Macy's had Diwali decorations on the floor in its store in New Jersey - and that may be a taste of things to come. When Nidhi Katuria, a NJ based filmmaker walked in, she stopped, stunned. This all red and blue quintessential American department store was actually showcasing Diwali festive decor and a big poster 'Happy Diwali'. "I felt an overwhelming feeling in my heart, like it smiled," says Kathuria.

While children still don't get a public school holiday in America as they do in India, drivers do get some relief from parking rules in Manhattan, with the suspension of alternate side parking in honor of Diwali. There is talk of a Diwali postage stamp, though we'll believe it when we see it!

Diwali Melas or fairs are a big part of the festival and are held for several days in Indian cities and towns, with food, dance, crafts and music. Now several of these open air, free-for-all celebrations are held in the US, especially in cities in New Jersey, New York, Chicago, Atlanta and California.

One of the oldest and biggest is the Deepawali Mela in South Street Seaport in Manhattan, where over 40,000 people turn up to celebrate the festival with fireworks, food and festivities. For the past two years, a big Diwali celebration has also been held in Time Square. As more and more Americans learn about Diwali from their Indian friends, they realize they can share the joy as well as the ideals behind Diwali - striving for a better life and vanquishing the forces of evil and darkness.

Lavina Melwani is a New York-based journalist for several international publications. She blogs at LassiWithLavina.com Follow her on Google +