A Hindu Thanksgiving: It's All about Gratitude

If Thanksgiving is a festival of gratitude, then Hindus have been preparing for it their whole lives.

If Thanksgiving is a festival of gratitude, then Hindus have been preparing for it their whole lives. In India, take a walk down the Mumbai waterfront in the early morning mist, and you see ordinary citizens quietly feeding the fish and the birds. Their daily day doesn't really begin until the deities in their home shrine have been venerated with fresh flowers and offered prasadam. It is only after eating a little of this blessed offering does the family sit down to their meals. Many remember to keep aside a portion of the food for a hungry person or the birds. It is all about sharing. Every Hindu festival is about counting one's blessings and thanking God for them. Indeed, buying a new car or new home entails special puja or prayer ceremonies to bless the new item and to offer thanks. "Gratitude is exalted as one of the most important virtues (dharma) in many Hindu texts," says Dr. Vasudha Narayanan, Distinguished Professor of Religion, University of Florida. 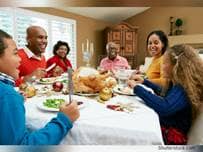 "It is both a human and divine virtue; prayers and panegyrics say Vishnu has qualities such as compassion and gratitude. By this they mean that if a human being does a good deed, the divine being wants to show his gratitude in many ways. The Ramayana says: Krte ca prati kartavyam esham dharmah sanatanah (Ramayana, Sundara Kanda) "To repay a good deed with another--this is the essence of Sanatana Dharma." Narayanan, who is also Director, Center for the Study of Hindu Traditions (CHiTra) , has lived in Florida for many years and has seen how Hindu Americans have interacted with the festival of Thanksgiving. She says, "It is a 'secular' holiday and the sentiments are something we can all resonate with but obviously, there are no 'family traditions' for new immigrants.

We do go to friends’ homes; in the 1970s and even early 80s, we were frequently invited by local American friends who worked hard to find us vegetarian fare and make stuffing without stock. Eventually, as the Indian population got larger, there were more events hosted by Indo-American families. In Gainesville, a university town, we used to invite students for a home cooked Indian meal, just as our professors used to invite us when we were students." Are there any Hindu prayers which are popular with families for this occasion? Since saying of 'Grace' before food is not a traditional custom in India where often food was sanctified and served, this is new territory for Hindus. In fact, even for the South Indian festival of Pongal which is generally interpreted as 'thanksgiving', there are no specific prayers, says Narayanan.Yet as she points out, "The Hindu traditions are dynamic; we add, we modify, we jettison, and we co-opt rituals very easily. 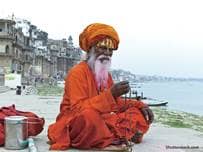 And in some groups, the prayer brahmarpanam (see http://www.sathyasai.org/devotion/prayers/brahmar.html) has become very popular." Anju Bhargava, founder of Hindu American Seva Communities (HASC) finds her own way of offering thanks. She say, “Our family tradition is to go around the table and share at least one thing that has happened to you that you are grateful for. This sharing is the communal prayer creates a spirit of thankfulness." Having worked with many Hindus in creating community awareness of service or seva, she says, “The Thanksgiving observance fits in very well with the Hindu sensibility - festivities filled with food, company of friends and family and with a values- oriented focus; a time to appreciate all that you have in life and a time to share your merits with others, so it is only natural that Hindu Americans join in the spirit of the observance with a natural élan. Hindus do know how to party and celebrate. What we need to do more is to serve, to bring the UtsavSeva (service through festivals) component more to the forefront." She adds, "Seva is an important aspect on this holiday. Many of us feed the homeless in some manner or form - either actually serve on that day, or before or after or even collect canned food and deliver."

Indeed sharing with the less fortunate, and with family and friends is an important part of Thanksgiving. But what do Hindu Americans put on their Thanksgiving table? They are not a homogenous lot so the menu is as varied as the number of Hindus in this country! Many Hindus do eat meat and for them the Thanksgiving turkey is a must, sometimes with tandoori coloring and spices. Yet for the large numbers of Hindus who are vegetarian, the turkey is a no-no and like President Obama, they grant it an official pardon! Hindus who are vegetarian relish the many fixings on the Thanksgiving table and also turn to meatless alternatives like tofu or lasagna or celebrate with a full-fledged Indian vegetarian meal. Fortunately, vegan and vegetarian food is so popular in America now that Hindus have a really easy time of it. Thanksgiving is all about sharing food so multicultural America has a lot to share. Says Vasudha Narayanan, " Most friends I know end up with international fare and create new traditions that way; so everything from hummus to seven-layered dip to eventually moving to good Andhra fare or avial and double-ka-meetha for sweets!" Thanksgiving is a festival totally in sync with the Hindu state of mind - it's about remembering the Almighty and his many blessings, and in turn sharing with the less fortunate.

Lavina Melwani is a New York-based journalist who blogs at Lassiwithlavina.com. Follow @lassiwithlavina and Google + 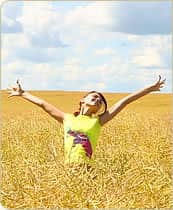 8 Tips on How to become a Happier Person