In reading of Krishna's exploits, we can find valuable lessons for killing the demons within all of us. 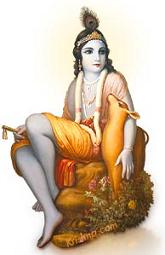 Each year on Janmashtami, the Hindu holiday celebrating Krishna's birthday, my family and I read together from the Bhagavata Purana, a sacred text recounting Krishna's pastimes. These stories talk of Lord Krishna as a disarmingly human-like boy who tends cows, charms his family and friends, and plays his flute. He spends most of his childhood, however, killing demon after demon, humorously re-routing their plans to destroy him so that they end up sealing their own doom.

Of course, Krishna is more than a mere comic book hero. All Hindus honor Krishna, and followers of the Vaishnava denomination especially revere him as the one Supreme Personality of Godhead. I am captivated by stories of his feats, and yet these stories force me to confront a debate raging within me. The devotee in me, the bhakta, wants to embrace these stories as literal truth and celebrate Krishna's wonders. The skeptic in me, the jnani, points out how irrational a literal adherence to these stories seems to be.

My head and heart would be forever deadlocked were it not for a 19th-century theologian named Bhaktivinode Thakura. Bhaktivinode was a renowned devotee of the Lord, and his poetry in praise of Krishna is sung faithfully in temples to this day. However, Bhaktivinode was also a man of this world--a husband and father, a government magistrate, and a Hindu scholar in an India ruled by the British. If anyone could reconcile intellect and devotion, and do justice to both, it is Bhaktivinode. On one level, Bhaktivinode speaks of Krishna's slaying the demons as symbolic representations of his removing impediments--in Sanskrit called anarthas--that stand in the way of our attaining love of God. These anarthas root themselves in the heart of aspiring devotees, preventing our faith from growing at all. Thus, Bhaktivinode recommends, even if we have a hard time accepting Krishna's killing the demons as literal fact, merely appreciating it in a metaphoric way can help us advance towards higher levels of spiritual realization.

On another level, though, Bhaktivinode explains that Krishna can certainly do things which stretch the bounds of our limited, material intellect. If his activities sound incredible, unbelievable, or far-fetched, don't worry: they're supposed to. After all, Bhaktivinode reminds us, we're talking about the Supreme. By definition, he is the most extraordinary unique being there is. We may not understand precisely how he accomplishes his feats. But through the agency of faith, Bhaktivinode insists, we can know them.

For Bhaktivinode, there is ultimately no conflict. Krishna's activities are divine play, lila. Fittingly, Krishna is anything but predictable. That Krishna can kill demons is wonderful; that such feats can speak to our own lives is more wonderful still.

Take, for instance, the first demon that Krishna faced--a witch named Putana. Adept in black magic, this ghastly hag specialized in murdering babies. Her supernatural abilities allowed her to change her hideous form into that of a beautiful nurse; incognito, she easily gained entrance into the room where the infant Krishna was sleeping and took him to her breast, which she had smeared with deadly poison. All-knowing--even as a seemingly helpless baby--Krishna accepted her tainted offering, but it had the reverse effect. Putana herself soon fell to the ground dead, her body restored to its true ugliness.

Bhaktivinode explains that Putana represents hypocrisy, particularly the hypocrisy that arises from superficial displays of devotion. To accomplish her nefarious mission, Putana had ostensibly came to nourish Krishna with her milk. Similarly, warns Bhaktivinode, we may make a show of piety while still harboring hidden motives, including the desire to be flattered and worshipped ourselves. Remembering Krishna's effortless slaying of Putana, we can pray to the Lord to accept our offerings--however contaminated they may yet be--and at the same time expose the hypocrisy in our hearts for what it is, so that we may develop humility.

Cultivating humility is, of course, easier said than done. Challenging us at every step of the way is false pride. To overcome this anartha, Bhaktivinode recommends that we meditate on Krishna's slaying the demon Trinavarta. This crooked yogi studied the mystic arts extensively and had learned to manipulate the wind. Taking the shape of a powerful tornado, he kidnapped baby Krishna, and spun him high into the sky. Trinavarta began to laugh at how easily he would be able to kill Krishna and, just to show off, flew higher and higher up into the sky.

Krishna enjoyed the ride for some time, but understanding the demon's true intent, made himself unbearably heavy. Trinivarta's massive body came crashing down, and with it his hopes of killing Krishna. The demon's limbs and pride were both smashed to pieces by the transcendent baby Krishna, who emerged without a scratch.
Similarly, excessive pride often causes us to become "puffed-up." Like the whirl-wind of Trinavarta, we spin higher and higher up, eager to show off our vast learning or mundane achievements, forgetting that these talents are gifts from a higher power. Inevitably, though, the harsh lessons of our own limitations bring us crashing down. Better to remember Krishna's instructive pastimes with Trinavarta; with both feet solidly on the ground, we are in the best position to appreciate that our accomplishments should serve to enhance humility, not steal it away.

When Krishna grew a bit older, he took up the role of a cowherd boy. Every day he went to tend his herd and play with the other cowherd boys in the woods and groves of Vraja. One day, a warlock named Agha saw Krishna and his friends in the forest. Agha was Putana's younger brother, and remembering how Krishna had killed his sister, Agha began to burn with anger. Moreover, Agha was cruel by nature, and so the mere sight of others happy enraged him. Agha transformed himself into a snake and expanded his serpentine body into a massive tunnel and his gaping mouth into a cave. Excited to explore this new cave, the innocent cowherd boys marched into Agha's mouth. Krishna, however, could not tolerate any danger to his friends and devotees, and he rushed in after them. Within the cavernous throat of Agha, Krishna expanded himself until the demon couldn't breathe anymore and suffocated to death.

According to Bhaktivinode, Agha symbolizes cruelty. "The American Heritage Dictionary" notes that being cruel means finding pleasure in the sufferings of others. Cruelty demands that we first separate out the other from ourselves. We see fault in the other, and allow that fault-finding to mature into hatred, and, eventually, act on that feeling to cause harm. Under the plea of avenging his sister's well-deserved death, Agha saw an opportunity to act on his seething hatred. Similarly, when we justify hatred or intolerance as righteous, we willingly plant a seed of cruelty within our hearts. The seed fructifies into a fast-growing weed, choking our ability to love, forgive, and grow.

Cruelty is such an insidious trait that Agha is also the Sanskrit word for "sin" itself. Bhaktivinode advises us to meditate on Krishna's entering into the mouth of Agha, and pray for him to likewise rush into our hearts and slay the agha of cruelty there, replacing it with the powers of tolerance and forgivingness. It may be frightening; we are never more vulnerable than when we choose to forgive. In such circumstances, we can also pray that Krishna award us the simple yet profound faith that his cowherd friends possessed, so that we may be as fearless as they were under his protection.

These are just a few of the many stories in the Bhagavata Purana of Krishna slaying demons. And like the demons in the stories I've recounted here, each of these enemies illustrates an obstacle to be overcome within us.

But, come on, the skeptic in me still asks. Is this stuff even relevant today?

As I type the end of this article, I listen to a radio broadcaster speak about the arrest of more than 20 would-be terrorists in the U.K. If they did what they are accused of doing, then these people almost murdered thousands of innocent men, women, and children. And they would have done it, on some skewed twisted level, in the name of religion, as an offering to God.

The radio announcer continues, mentioning that the U.S. Embassy is warning India of possible terrorist attacks in that country, especially on India's Independence Day, August 15th, and on August 16th--Janmashtami, a day when families will be gathered in worship, many recounting these same stories of Krishna, some still mourning a loved one lost to last month's terrorist attacks in Mumbai.

Are there demons present today--actual, literal murderous beings? Perhaps. Perhaps they use their mystic powers to disguise themselves as masked bombers and hide in clandestine terrorist cells.

Following Bhaktivinode's analysis, though, the most treacherous demons may be hiding closer to home. Seated comfortably within our own hearts, they terrorize us from the inside out. Hypocrisy, pride, cruelty, envy--these are our 21st-century Putanas and Aghas. Yes, we glimpse them peeking out at us from the evening news. But we also might see them, if we try, in the face that stares back at us in the mirror. May Krishna grant us the courage to look hard enough.