Baby Naming--with Help from the Gods

Some Hindu names aren't easy for kids to grow up with in New York City. But we couldn't waffle on a divine promise.

Beliefnet
NEW YORK--One of our pregnant friends complained to us that we had already "taken all the good names." She was exaggerating, of course, but our twin babies do have four names each. And explaining why they have four names--instead of the usual two of most Hindu kids--has been an all-too-frequent occurrence. 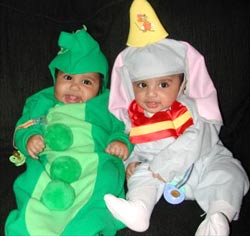 Durga (left) and Krishna (right) in their American Halloween incarnations: A pea in a pod and Dumbo.

Two years ago, Roopa was praying at the Hindu Temple in Flushing, Queens, and was making her rounds of the various gods. At one point, she found herself standing, eyes closed, in front of one of the idols. As she prayed silently, she said, "If we have a baby, we will name it after you." Then she opened her eyes to see that she was standing in front of the statue of the goddess Durga. We later joked that we'd better have a girl one day--otherwise, we'd have a boy with a rather unmasculine name. We also joked that it was good she hadn't made that promise to some of the gods there with more complicated names, such as Manikkavachaka, Swarna Bhairava, Dakshina Moorthy. A few months later, we discovered we were pregnant and doubly blessed. We had a name for the girl already picked out then; we just needed a name for the boy. But as we began to discuss the name Durga with our family and friends, we encountered a good deal of resistance. Among the complaints: "too complicated," "too rare" (wasn't that a good thing?), "too hard for Americans to pronounce," "doesn't rhyme with anything," "no short form," and on and on it went. Several folks suggested other girls' names they liked and also suggested other names of the goddess Durga herself, though some of those, such as "Chamundi," were even more complicated. While we agreed that Durga wouldn't be the easiest name to grow up with in New York City, we also agreed you don't try to waffle on the kind of divine promise Roopa made. You never know the consequences. So we settled on Durga, well aware that there was a good chance some obnoxious little boy would one day discover on the Internet one of the more fearsome incarnations of Durga, with all those arms and weapons. We also picked out a second, easier, more predictable name that she could opt to use as her preferred name if she wished. We went with Maya, one of those names that are popular with Indian Americans because they "cross-over" well. Names like Neal and Jay. 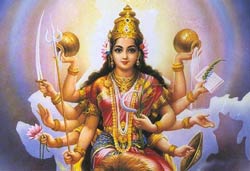 Durga, Hindu Warrior Goddess
When it came time to pick a name for our son, it was a fairly easy decision. Roopa had kept her maiden name, Unnikrishnan, but understood that the children's last name would be Sreenivasan. What other choice did we have, a hyphenated "Unnikrishnan-Sreenivasan" that wouldn't fit on any forms and would possibly get them beaten up in the schoolyard? We settled on Krishna as a tribute to their mom's last name. We figured everyone would call him "Kris," anyway. Besides, as good Malayalee Hindus, we often take Lord Krishna's name, though never in vain. We were also hedging our bets: Durga was part of the Shaivite pantheon of Shiva worshippers, and Krishna, of course, was central in the Vaishnavite pantheon of Vishnu devotees. This way, we covered both bases, since most Hindus tend to fall into one of the two camps. For Krishna's second name, we opted for Mohan, after maternal uncles in both sides of the family. There was another bonus: in the matrilineal tradition of the Nair caste we belong to, the most important person in a child's life is the maternal uncle--he's in charge, not the father. We don't follow this custom, but it's a nice homage. That brings us to the name that most intrigues friends and family: Nellery. That's Roopa's "tharavadu" name, which is the maternal ancestral home. Traditionally, we Nairs were identified with our mother's tharavadu. This custom fell by the wayside as naming patterns became more anglicized. Using Nellery was our salute to yet another tradition. Sree is particularly glad they have middle names. He grew up in Manhattan without one and hated having to leave the "middle name" blanks in forms blank. He clearly had middle-name envy and once, during his pre-teen years, considered giving himself one.

In the months since they were born, both of us have received considerable flak about these complex names. But none from Sree's father. You see, for the longest time, the top Google result for a combination of the words "Durga" "Krishna" and "Sreenivasan" was a 1999 essay in which he happened to mention two favorite gods he'd worshipped as a child: Durga and Krishna.