Beliefnet
My line of work--art criticism with the occasional film review thrown in--is hard on both the seat and the feet. If I'm not sitting through "What a Girl Wants" or its ilk, I'm wearing out shoe leather on the hardwood floors of the city's museums and galleries. 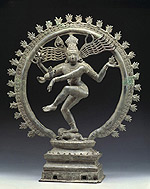 This is why the pleasure was twofold upon entering "The Sensuous and the Sacred: Chola Bronzes From South India," a splendid exhibition devoted to 9th- to 13th-century temple statuary of Hindu gods and goddesses at the Arthur M. Sackler Gallery of Art, to see the bench with cubby holes. Nearby was a sign welcoming--ever so gently--those visitors who might want to remove their shoes as a sign of respect for these once sacred, though now deconsecrated, manifestations in bronze of beings with names like Vishnu, Krishna, Shiva, Uma, Kali, Skanda, Ganesha and others. You didn't have to be a believer to feel the energy there, the hush of the temple reinforced by the muffled shuffle of stockinged feet, the dimmed, subterranean lighting and the subdued sound of post-Christmas visitors seeking respite from the return counters of shopping-mall department stores. For those who remember the Sackler's "Devi" exhibition of a couple of years back and the way that show explored the myriad facets of the Great Goddess, the multiplicity on parade here will be familiar, even comforting. Like sundry facets of a single gemstone, or the multiple personalities of some made-for-TV movie character, the divine has many faces, some beatific, some with elephant ears and a trunk, some with the grimacing mask of a withered hag. Saint Karaikkal, for instance, a once beautiful holy woman, was reduced to the appearance of a crone upon asking for, and being granted the favor of, release from her burden of flesh. All she wanted, we are told, was to spend eternity watching Shiva's dancing feet. And oh what feet they are, elegant, poised, with toes flexed like the fingers of a young girl's hands. Certain gods are some worshipers' favorites, too, as is made clear from the wall text panels that incorporate reflections of contemporary Hindus. It's a nice touch, by the way, and it helps contextualize the art, as well as anchor it in the realm of the sacred, where it belongs. But let's not forget the bodies, as if you could. That's the sensuous part of the show. And no, I don't mean Kama Sutra sensuous--although at times there seem to be enough pneumatic bosoms and gravity-defying buttocks on view that the art threatens to float off its pedestals and drift away over the Mall. But that's all part of the sacred too. That these deities inhabit fine, buff, cellulite-free bodies is kind of the point, for it is in these perfect statues, these tangible expressions of the holy, that worshipers find something not only to aspire to but to hold onto, something to dress in silk, adorn with flowers and serve milk to. The bronze has to look like flesh because it is a kind of temporary flesh, a house for the spirit.

After all, the show seems to ask, what are our own bodies but temporary vessels for a kind of enduring essence? It's funny how taking off one's shoes -- the better to feel the floor with, my dear -- can suggest not only carnality, but the presence of something ineffable, transient and unknowable.