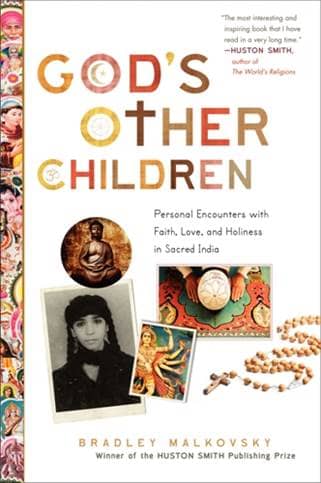 From God’s Other Children: Personal Encounters with Faith, Love, and Holiness in Sacred India. Copyright © 2013 by Bradley Malkovsky. Reprinted with permission from HarperOne, a division of HarperCollinsPublishers.

It is difficult to sift fact from fiction in regard to the life of Qamar Ali Darvesh. One hears a number of purported facts not included on the plaque outside the shrine that describes his life. If true, they help answer a number of questions. It is said, for example, that unlike other family members, the young boy was very pious and even studied under a Sufi teacher from the age of six. From early on he was known for both his compassion and his ability to heal others. He died at eighteen, but no cause is given, as far as I have been able to find out. On his deathbed the young saint instructed that a large stone be placed near his shrine after his death and that the stone should only be lifted by eleven men using only their index finger and only when invoking the saint’s name. Qamar Ali Darvesh did not explain why the number eleven was important or why only one finger was to be used. More important than anything else was the spiritual message. By the lifting of the stone under such unusual circumstances people should know that nothing is greater than the power that comes from God. And everyone should know that God loves all people, regardless of their religion or caste. Anyone may participate in lifting the stone, regardless of their background. When we lift the stone, we are to remember God’s love for all.

I want very much to believe this version of the story.

Although I had observed the lifting of the stone several times over the years, I had never tried doing it myself until January 2011, when I brought a group of American students with me from my university back in the United States. The day we arrived in Shivapur it was late morning, and the large crowds had not yet gathered. Above us large fox bats hung upside down from the trees, like heavy fruit. We watched as a circle of men raised the stone high above their heads, before it plummeted back to earth. One of our students, Stephen, stepped into the circle with ten Muslim men, who had encouraged him to take part. But the eleven men could not lift the stone higher than a few inches. Stephen immediately recognized what had happened: he had forgotten to recite the words. So he rejoined the circle, this time with me by his side. And yet the stone fell back to earth again after barely rising above the ground. This time it fell in my direction, landing at my feet. I was perplexed by this, especially since I was confident that the stone would be lifted. But then I remembered that I had made exactly the same mistake as had Stephen only moments before: in concentrating on the stone, I had forgotten to recite the words. The oldest man among the Muslims noticed what I had done and said to me firmly in broken English, “One breath for all words. No stopping.” In other words, take a deep breath and don’t forget to call out to the saint.

So we tried it one more time, now without Stephen, who had graciously stepped aside for a Muslim man. As we chanted together, “Qamar Ali Darve-e-e-e-sh!,” we were finally able to raise the stone above our heads. It felt as light as a pebble. Later Stephen and other members of our group joined in, calling out the saint’s name, and each time they effortlessly lifted the stone.

Perhaps one day scientists will offer an explanation as to how the stone is raised, drawing solely on their knowledge of energy and physics. But I doubt that they will be able to explain why the stone cannot be lifted without calling on the saint, why the circle must be composed of only eleven men, and why the stone falls in the direction of the one who does it incorrectly.

As we were returning by bus from Shivapur on that trip, Mariam, who was also with us, wondered aloud whether women, too, might one day be given the opportunity to lift the stone, since the miracle is supposed to be a sign of God’s love for all people, and not only for men. Why not give women a chance? The Muslim women who come to the Shivapur shrine simply accept without complaint that they are excluded by sacred tradition from lifting the stone, just as they take for granted that as women they may not enter the sanctum where the saint is buried. But did Qamar Ali Darvesh explicitly forbid women from raising the stone? It is well known that many Sufis in India and abroad have stretched the boundaries of traditional Muslim law and piety for the purpose of promoting a more tolerant and inclusive spirituality.

Why not here at this Sufi shrine, too? Mariam speculated about the possibility of women slipping into the shrine compound under the cover of night and raising the stone high above their heads, not so much as a sign of their own accomplishment, but rather as a sign of their full equality and empowerment before God. What would be the reaction of men who were to find out about this? How many would be compelled to rethink their understanding of women’s relation to God and men? How many, by contrast, would regard the lifting of the stone by women as a kind of blasphemy that must be punished? For women to gain full equality in Islam, says Mariam, they will have to boldly take the initiative and be willing to suffer for their convictions.

Seeing—and feeling—the stone being raised that day caused me to come to a deeper appreciation of God’s presence in the lives of Muslims. What stood out in particular was that the raising of the stone was connected to a Muslim saint of great humility and lowly stature, a young man who had practiced selfless charity toward those in desperate need, a man, finally, who recognized that God’s love and mercy were not restricted to one group or religion. That Qamar Ali Darvesh had displayed so many Christlike qualities made it easy to believe that God might be using him, even centuries after his death, as a bridge to bring together Muslims and people of other religions.