At an exhibit of Orthodox icons in New York, an expert talks about the images' role in Russia's religious renaissance.

Beliefnet
Dr. Tatyana Vilinbachova is chief curator of icons at the Russian Museum in St. Petersburg. She spoke with Beliefnet recently in conjunction with the opening of "Holy Russia in Tuscany: Icons from the Collection of Francesco Bigazzi," a collection of 19th- and early 20th-century icons now on view at the American Bible Society in New York City. Selected icons from the exhibit are shown below.

Some people have called icons "windows into the eternal" or the immortal. Would you agree?

Yes. Through icons, people could be closer to eternity. Looking at the images of saints they venerate, they make the connection-they feel eternity.

Which icons are most beloved? 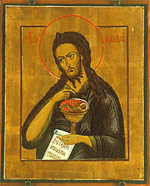 Saint John the Forerunner, mid 19th c. Tempera on panel
It's difficult to say. Each land, city, and even some villages have their own. We have a great quantity of saints from the Byzantine pantheon. Russians call their country the land of the Mother of God, so almost every area has its own venerated image of the Mother of God: Novgorod, Smolensk, Kazan...

As a curator, you've seen thousands of icons. Do you have any particular favorites?

It's hard to say, but in our Russian museum, I like the 15th-century Novgorodian icon of St. George and the Dragon. It's a very pure form showing the Novogorodian understanding-and the typical features--of the image. It's very deep, very beautiful.

One of my favorite painters is Dionysius, one of the few icon painters who's ever named. He lived in the second part of the 15th century. In the Russian museum, we have icons from the Ferapont monastery (see images). It's a beautiful complex; I like its icons-especially the Mother of God-very much.

My impression is that when the Soviet government promoted atheism, a lot of Russians walking through your museum didn't know which saints and Bible figures were in the icons.

It's a tragedy of Soviet science. When we made reproductions [of our museum icons] for posters, we were told that there should not be crosses or halos on the posters. How is it possible?

If you look at these posters, you'll find, for example, the face of an angel, but only a fragment-other parts are cut out. Only two saints, Boris and Gleb, could be shown (see image).

Students didn't study iconography, so if you wanted to be a specialist you'd have to do study on your own initiative. A lot has changed. We can speak not only about the style of the icon, its beauty as art, but also as a holy image.

Saint Catherine, mid-19th c. Tempera on panel
There's been a religious renaissance in Russia. Are more people painting icons, and do you think the quality is good?

It's true that more icons are being painted, but it's early to speak about results. Over the ages, icon painters continued the tradition tried to find their own language in the tradition. Today's painters are also trying to do this. Most of the icons I've seen are variants of old iconography. I think a language will appear. I read a theory once that there's a spiritual meaning to icons' "flat" perspective. So when you look at a "flat" icon, you're looking at an object the way God would-it's the same from any angle. Would artists who knew how to paint using Western-style perspective not do so for religious reasons?

I know this theory. Boris Uspensky has a very interesting work about the meaning of icons. But you see that even in this exhibit, there are various images of the Mother of God that use a more Western-style perspective. But we know that in some centers of icon painting, painters worked very traditionally, especially with icons painted for Old Believers. It was about tradition and the inner world.

In St. Petersburg, a lot of churches that were built in non-traditional forms were filled with icons painted by pupils from the Academy of Art. These students studied Western art and painted looking at Renaissance images, but used the traditional perspective for the icons. It's a strict system, a wise system for perspective.

Each era brings its own understanding of the image. It's in the head and in the soul. When other systems appear, it's because the people begin to think and feel differently.