Watch one of the world's most famous holiday choirs perform. 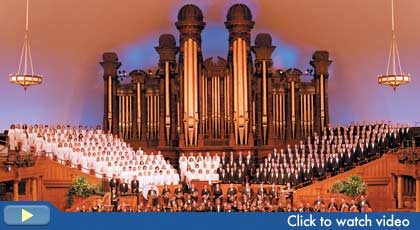 Want to own their latest CD, "The Spirit of the Season"? We've got two copies to give away. Here's how to enter:

List your top five favorite holiday songs from any artist. The lists containing the most commonly named songs will win. Entries must be posted by Friday, December 21. Click here to enter and click here for official rules.

The Mormon Tabernacle Choir is one of the oldest and largest choirs in the world, with 360 members, all of whom are volunteers and active in the Church of Jesus Christ of Latter-day Saints. The Salt Lake City-based choir performed at the winter Olympics there and they have been part of five presidential inaugurations. They were dubbed “America’s choir,” by President Reagan. This year, for the first time, the choir released Christmas songs exclusively for Beliefnet, with a guest performance by Norwegian singer Sissel.

Their latest CD, “Spirit of the Season” is a mix of traditional and contemporary Christmas songs, and it hit number one on Billboard’s classical charts. It’s also been nominated for two Grammys. The choir is well-known for its Christmas concerts and CDs—they won an Emmy for a Christmas TV special in 1987. This year, their 2006 Christmas performance will be broadcast on PBS .

While the Christmas concerts are popular, they’ve also performed in 75 countries, including a July 4th performance with the Boston Pops. The choir’s history dates back to the mid-19th century, when it first performed before a church conference, but they have also embraced technology. Their weekly, live half- hour broadcast has been running continuously since 1929. In 2003, they celebrated 75 years in broadcasting. With this special release for Beliefnet, they continue expanding their broadcast technology.