You Don't Belong to Any Church: You Belong to God

A small number of people manipulate the circumstances of the many. Regardless of the “ism” at the end of of political system, the result looks the same. 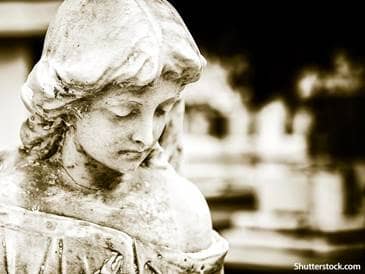 You don’t have to be a student of political science to recognize that there is no perfect, man-made governing system.

Even democracy — which is not what we live under in the United States — works better on paper, or parchment, than it does in real life because, though we theoretically operate with the concept that every single adult — male or female — has equal say in how things are run, in reality the job is expropriated by a limited group that has the necessary money and power to get elected. (What percentage of U.S. Senators and Representatives are lawyers, versus the number who work at Wal-Mart?) Only a naive person would insist that the wishes of the masses dictate the decisions of the elect.

As Christians, we pledge our allegiance to One and One only — God. Magenta, original oil painting by Steve Henderson.

Sadly, there’s never a shortage of naive people, nor those who work upon their fears. And hence we get the system we are born under — be it communism, or despotism, or oligarchy, but the general result is that a small number of people manipulate the circumstances of the many. Regardless of the “ism” at the end of political system, the result looks the same.

God’s System: “You know that the rulers of the Gentiles lord it over them, and their high officials exercise authority over them,” Jesus tells His disciples in Matthew 20:25.

I cannot remotely imagine any civil government operating under this ideal, which is understandable because the nations and kingdoms of men do not honor the principles and practices of God.

The Church System : God’s church, however, is supposed to be doing so. Is it? In God’s kingdom, it is the least who are greatest — and if we don’t see that in the system we’re in, then it’s not part of God’s kingdom. Summer Breeze, original oil painting by Steve Henderson.

This would depend upon one’s definition of church, and if the operating definition is no more than a building in which one “worships” god, and the denominational association under which one does so (Catholic, Protestant, Baptist, Episcopalian, Emergent, the list is endless), then the church looks little different from any man-made governing system. It has its boards and committees and leadership sect and rulers who lord it over the laity (masses) in the pews. (If this sounds like a corporation, it’s not an accident as oligarchies — the man-made system under which the majority of the world groans these days — are marriages of government and business. Religion, as a business, can easily snuggle in.)

But what about another definition for church, one that accords more accurately with what is written in the New Testament:

God’s people, who, though they are many, are one in the body of Christ (not just one little cluster of adherents who meet in one building that is open from 9:15 a.m. to noon on Sunday morning), and individually one with another. (Romans 12:5)

The apostle Paul’s words in Ephesians 2:19-22 are ringing and strong, something we can grasp onto and say, “YES! I want that!” —

“You are no longer foreigners and aliens, but fellow citizens with God’s people and members of God’s household, built on the foundation of the apostles and prophets, with Christ Jesus himself as the chief cornerstone.

“In him the whole building is joined together and rises to become a holy temple in the Lord. And in him you too are being built together to become a dwelling in which God lives by his Spirit.”

One God, One World - But Not Like Man’s: Long before the Rockefellers and the Rothchilds and the Bushes and the Carnegies and the men of money and renown dreamed of their global economy and One World Order, God set up a kingdom in which His people — His daughters and sons — interact together as one body, one temple, one spirit with one leader — God, our Father.

His is a kingdom that is not a democracy, not a republic, but a theocracy — in which there is one supreme ruler — God — who wields not only power, but compassion; not only justice, but mercy; not only wisdom, but love — the perfect and unfailing love of a Father towards His children.

No human ruler, no human system, no human government, no human church establishment, can do this.

And we don’t expect it to. But while there is no theocratic rule of man-made government (thank God! can you imagine being required to worship any human president, prime minister, or monarch? It’s happened, you know), there is a theocracy for the believers in Christ, and we are called to serve Him as our leader, master, monarch, and father (this latter being the most friendly and easily accessible concept).

Follow God, Not Men: This means that, as individual believers in Christ, we serve not the established church, not our denomination of choice, not the leadership and worship team of the building we frequent, not a mass-media nominated “national pastor” who writes books and visits the pope, but God the Father alone.

He commands our lives, our obedience, our thoughts, our loyalty, and our very souls, but it’s a good exchange, because He gives us, readily, His love, His compassion, His mercy, His teaching, and His guidance and help as He shapes us into being mature sons and daughters of His household.

When we are told, in Hebrews  10:25, to not give up meeting together, this is not a mandate that we be someplace specific every Sunday morning at 10:30. It is an exhortation that we seek out, however and wherever we can find them, fellow believers and we fellowship together, steel sharpening steel, something vastly different than man-made religious authority would have us believe.

We do not “belong” to a church, a building, a movement, or a denomination — we belong to God, and it is to God alone that we owe our lives, obedience, service, and souls.