Why We Could Never Earn Eternal Life 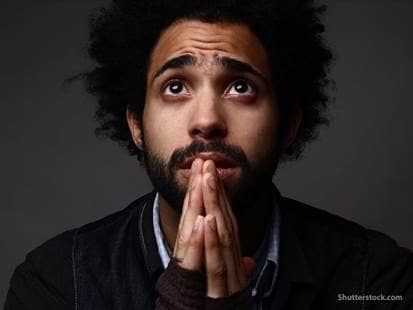 It’s like that awkward moment when someone gives you a gift and then you reach into your pocket to try to pay them for it. Not only does it come off offensive, it completely destroys the purpose of the moment – an opportunity to express genuine generosity. Let’s step this up a trillion levels and think about how God feels, when we busy ourselves with works to try to earn His love, favor and way into Heaven. What does that say about how we perceive God…His nature and personality? In action we basically turn our Loving Father, The Holy One and Majestic Creator of the universe into a distant, superficial dictator who shows favoritism based on how much we do for Him (ugh). We struggle to accept the fact that God is not like us. He doesn’t have selfish, human tendencies and manipulate people to make them earn His love. So when Jesus says, “I have come that they may have life, and have it to the full,” He means to give you eternal life and is not waiting for you in the next breath to muster up payment. He has already covered the cost.

But is there something more we could do to add to that, you know…just to show the Triune God we’re really serious about this?

If you are like me, you might have grown up basing your self-worth on your achievements. When you could bring home a straight-A report card all was right in the world, but anything below that would shatter your peace. Like the raging seas the Savior calmed for the disciples, those rapidly crashing waves of self-doubt and fear of failure rocking alongside the boat of life were a constant. For the past 28 years, I thought I had to keep making things happen in order to stay in God’s good graces, but the following revelation from The Gospel completely blew up this idea: When the Spirit of God enters our life, it imputes and infuses the righteousness of God through Christ fully, permanently and automatically. We don’t gradually accumulate “cool points” over time; we unpack and unwrap what’s already been bestowed.

The Apostle Paul begins to unravel this for us in Romans building the case around the first family, “Therefore, just as sin entered the world through one man, and death through sin, and in this way death came to all people because all sinned.” So no matter how good I strive to be in my own strength, sinfulness is passed down through the birth canal, fully and automatically. We are in a sense wired for sin. We are wired for love, purpose, worship and praise…but the transgression of Adam flawed the natural propensity of man in ways God never intended. Yes, God had the power to stop this, but conscience decisions from the heart are more important. It’s so interesting the value that God places on free-will, even in the last days we read in the book of Revelations that to the very end He gives people a choice to choose His path from a willing heart, but even after the thousand year reign some still choose to fall away. So eternal life was stripped from man in the Garden of Eden, the spiritual nature (God’s nature) atrophied and the human nature now begins to overpower and strengthen the body. Absent from the presence of God, our desires are allowed to run wild. So how did God adjust?

The Reconfiguration: The Holy Spirit

God gave Satan (in the serpent) a promise in the garden, “I will put enmity between you and the woman, and between your seed and her seed; He shall bruise you on the head, and you shall bruise Him on the heel.”

Because God gave man dominion over the earth, He knew that in order to rescue man and reclaim the keys of eternal life, He would have to enter the world and be born of the seed of Adam in order to reverse the curse, “The reason the Son of God appeared was to destroy the devil’s work ” (1 John 3:8). Throughout the Old Testament we see the Holy Spirit coming “upon” the prophets and mighty warriors in battle, but in the New Testament the Holy Spirit enters man through Mary to bring forth a child, “Therefore the Lord will give you a sign: The virgin will be with child and give birth to a son, and will call Him Immanuel…God with (not upon) us. Here’s the main reason why eternal life is out of the realm of human striving ability, because apart from the Holy Spirit dwelling within we don’t even have the currency to do business in the Kingdom of God…we are as humans spiritually broke in and of ourselves. God has to pay our way (and keep pouring into our lives). Let’s hear it another way from C.S. Lewis in Mere Christianity:

“An ordinary Christian kneels down to say his prayers. He is trying to get into touch with God. But if he is a Christian he knows that what is prompting him to pray is also God: God, so to speak, inside him. But he also knows that all his real knowledge of God comes through Christ, the Man who was God – that Christ is standing beside Him, helping him to pray, praying for him. You see what is happening. God is the thing to which he is praying the goal he is trying to reach. God is also the thing inside him which is pushing him on – the motive power. God is also the road or bridge along which he is being pushed to that goal. So that the whole threefold life of the three-personal Being is actually going on in that ordinary little bedroom where an ordinary man is saying his prayers. The man is being caught up in to the higher kinds of life what I called Zoe or spiritual life: he is being pulled into God, by God, while remaining himself.”

The Final Infusion: Christ In Us

Jesus steps on the scene like an older brother you look up to and want to be like.

He does life as fully man and fully God and teaches us to steward the Holy Spirit that will again be trusted to us. Relationship and access to The Presence will soon be ours. But there is a real price to pay for sin, you can’t just sweep it under a rug. Evil has its consequences and before death could be replaced with eternal life there had to be an exchange. A life…for a life…for my life and yours. God, through Jesus, pulled into Himself all of the sin of the world. If anyone else had done so, say you or me, the death would have been justified. The punishment would have fit the crime. Eternal life was a bloody business that only God had the capacity to orchestrate and ultimately do. When Jesus says, “It is finished,” that’s His way of saying put your money away and accept this from Me – us trying to earn this shows how little we understand the value.

The keys of death are snatched from the enemy and the Righteous One gives you the keys of life and leaves you with this, “Peace be with you; as the Father has sent Me, I also send you….Receive the Holy Spirit.”

So stop striving for eternal life…work from a place of restful receipt and unwrap what's already been given.