When Your Friends Don't Believe in God

A lot of my friends don't believe in God, but it helps me in my own faith. 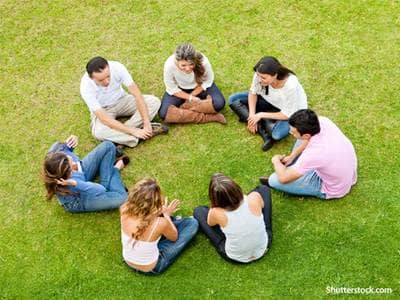 A lot of my friends don't believe in God.

I don't mean "acquaintances" or Facebook friends, but my actual -- call you up on a bad day/let's have brunch on Saturday/help me, I'm nervous about this date -- friends.

Perhaps this wouldn't sound so weird except that I'm a minister who works for a church.

Let me be clear: My friends are not "missionary enterprises." I do not try to "convert" them or usher them into a pew on Sunday. Most of them are still sleeping as I'm putting on my clerical collar and heading into work on Sunday morning.

When we do talk about faith, it's always a fascinating conversation because I know that the words spoken are honest reflections free from the desire to observe an artificial theological decorum that saddles so many reflections about belief from people who identify with a particular faith tradition. It's easier to talk about God when you're not worrying about him tossing a lightning bolt your way if you say something that pisses him off.

But perhaps one of the reasons I gravitate towards my friends (besides the fact that they're completely awesome) is that I think they're some of the most honest "believers" I know. Not a "believer" as the word is typically used to denote a person of faith, but a believer in the sense that they hold their beliefs as the result of a deep questioning in conversation with an authentic interrogation of their interpretation of history and personal experience. Some of these honest believers are survivors of sexual assault who can't get their minds around why a good God would allow something so horrific to happen to them. Others have lost partners or best friends to freak accidents or terminal illnesses and remain heartbroken by ostensibly unanswered prayers for protection and healing.

They gave God a chance -- sometimes several chances -- and wrestled with questions about the meaning of life and the nature of being but ultimately did not find a framework for faith (Christian or otherwise) that seemed plausible for them. This doesn't make them shallow, selfish, or insincere. It makes them some of the bravest people I know.

In 1766, the founder of Methodism, John Wesley, wrote a letter to his brother Charles in which he said, "I do not love God. I never did. Therefore I never believed, in the Christian sense of the word. Therefore I am only an honest heathen..."

Wesley's words were the result of both external circumstances impacting his life as well as internal emotional stresses he encountered. While he later expressed deep faith in God, in this moment he bared his soul in the rawest of ways and expressed a type of belief that, rather than offending God, probably gave God great joy.

The very nature of faith means we cannot prove God's existence; it's a matter of belief, not a product of empirical certitude. I'm inclined to believe that God values the brutally honest confessions of her beloved children over the vapid and vacant professions of faith that have not been tested and thus lack the credibility to be trusted.

I believe what I believe because when I take an honest look at my journey and where I've been and what I've learned by studying the texts I attest to be sacred, I echo the words of Fr. Greg Boyle that, "nothing in my life makes sense outside of God," even on days when it might be easier and less painful to say otherwise. Some of my friends have engaged in similar exercises -- no less honest than mine -- and arrived at a different answer.

Rather than critique the conclusions reached by my friends, I thank them for modeling what it means to be courageous in one's questioning and empowering me to engage the very idea of belief at its deepest level; a place free from the fear of "offending" God with honest doubt and a skepticism that's hard to shake. It's ironic, isn't it? My friends who do not believe in God are a large part of the reason I believe in God now -- even passionately so.

In A Prayer for Owen Meany, John Irving writes, "...unbelief seems vastly harder to me now than belief does -- but belief poses so many unanswerable questions!"

Believing is hard work and I'm thankful for my friends who help me through it with their own honest journeys of belief.

Article originally seen on The Huffington Post. Kevin Wright currently serves as the Minister of Education at The Riverside Church in the City of New York.