What Does the Bible Say About Poverty?

God’s heart is intensely for the poor and if we are truly following Christ, then so should ours. 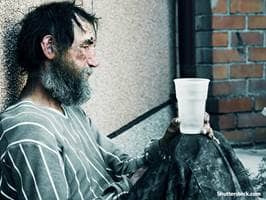 Why is it so natural for us to notice and be impressed with people who have wealth, fame, and popularity but shun what we define as weak and the poor? The Bible is very clear and in the New Testament, Jesus tells us this should not be. God’s heart is intensely for the poor and if we are truly following Christ, then so should ours.

James warns Christians by saying… My brothers, as believers in our glorious Lord, Jesus Christ, don’t show favoritism. Suppose a man comes into your meeting wearing a gold ring and fine clothes, and a poor man in shabby clothes also comes in. If you show special attention to the man wearing fine clothes and say” Here’s a seat for you, but say to the poor man, “ You stand there or sit on the floor by my feet, have you not discriminated among yourselves and become judges with evil thoughts? Listen, my dear brothers: Has not God chosen those who are poor in the eyes of the world to be rich in faith and to inherit the kingdom he promised those who love him? But you have insulted the poor. Is it not the rich who are exploiting you? Are they not the one who are dragging you to court? Are they not the ones who are slandering the noble name of Him to whom you belong? If you really keep the royal law found in scripture, Love your neighbor as yourself, you are doing right. But if you show favoritism, you sin and are convicted by the law as lawbreakers. (James 2:1-9)

Poverty began during the Fall when Adam and Eve take part in the forbidden fruit. “ Cursed is the ground because of you; through painful toil you will eat of it all the days of your life… By the sweat of your brow you will eat your food until you return to the ground since from it you were taken for dust you are and to dust you will return. (Genesis 3:19)

God did establish laws to help the poor many years later and tells the Israelites to help the aliens, widows, orphans, and the poor in Exodus.

In Leviticus, The Year of Jubilee occurs after seven sets of seven yearly intervals are finished. “ Fiftieth “Liberty” year is known as the day of atonement because God owns everything. It is a time of freedom and celebration. God says to the nation of Israel… Do not take advantage of each other, but fear your God. If one of your countrymen becomes poor and is unable to support himself among you, help him as you would an alien or temporary resident. God’s intention in Deuteronomy was that all debts would be canceled every seven years for His people.

Shannon Stoddard is a Christian inspiration columnist for Beliefnet. To read more from Shannon visit her column You Can Sit With Us .