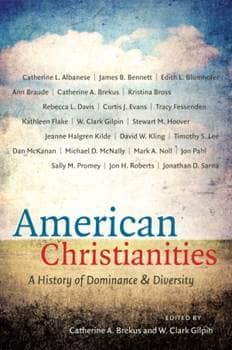 From "The Practices of Native American Christianities" by Michael D. McNally published in AMERICAN CHRISTIANITIES: A HISTORY OF DOMINANCE AND DIVERSITY edited by Catherine A. Brekus and W. Clark Gilpin. Copyright © 2011 by the University of North Carolina Press. Used by permission of the publisher.

The Practices of Native American Christianities

Only recently have scholars begun to traverse the disciplinary boundaries that have prevented their fuller apprehension of the wide range and complex texture of the practices and theologies of Native American Christians. Specialists of indigenous religions largely have left the story of Native Christianity to missions historians. Historians of missions, in turn, lacking the linguistic and ethnographic training to otherwise interpret the subtleties, have understood Native Christianity largely as the straightforward product of missionary intentions and efforts. But this has begun to change. Informed by a number of important recent studies, I aim in this essay to examine whatNative communities have variously done with the Christianity presented by missionaries. How they improvised locally on the missionary tradition such that the Christian tradition thus engaged bears consideration not simply as a subset of missions history or church history but as a Native American religious tradition among other Native American religions.

In this regard, this volume’s attention to Native American Christians adds not only important cases to enlarge American Christianity’s larger narrative but refines it by questioning assumptions common to the history of Christianity and the history of “religion” generally. We must consider the distinctive contours of indigenous religious practices— specifically the relationship between practice and belief, between religion and culture, between sacred and profane— for the Native Christianities that emerged from missionary encounters often drew on these indigenous religious idioms in ways that defy conventional analytic frameworks of conversion and acculturation.

From the point of view of many Native people and no small number of professional historians and anthropologists, the story of Native American Christianity, associated as it must be with conquest, colonialism, and cultural assimilation, has been set in a context of tragedy. It is as true of FrancisJennings’s The Invasion of America: Missionaries, Indians, and the Cant of Conquest as it is of Osage scholar George Tinker’s Missionary Conquest: The Gospel and Native American Cultural Genocide.1 Even as it is important to lay claim to the lived experience of those tragedies and the profound losses— human, linguistic, and cultural— that can be tied to missionary encounters and their legacy of assimilation policy, it is also important to examine just what Native peoples, with considerable resolve and resourcefulness, have made of the missionaries’ message. In this, the story of Native American Christians cannot content itself with a consideration of what Christian missionaries, along with other forces of colonialism, tragically did to Native people, but it must examine what Native Christians were able to do, albeit often within tight confines of colonialism, with that Christian tradition.

Of course, a consideration of what Native people have done with the Christian tradition must include consideration of the colonial context and the tragic legacies of the missionary encounter. But it must also reckon fully with how Native Christians remade missionary Christianity not simply through a process of translation but through a creative and complex transposition through Native religious idioms of practice and belief.

If their connection to the Christian tradition unites such a wide range of instances, the first word in any careful consideration of Native American Christians must be “diversity,” for Native Christianities reflect three different sources of variation: the dynamics of indigenous religions, the varieties of missionaries and the contexts of their encounters with Native people, and finally the artful creativity of Native Christians themselves.

It may seem counterintuitive, given the position of many Christian missionaries—that they were bringing the gospel to peoples without religion—but Native peoples’ own aboriginal religions did much to equip them to make something of missionary Christianity. Native religions have differed greatly across more than 500 recognized tribes speaking over 200 languages and informing economies and cultural ecologies tied to landscapes ranging from Alaska’s tundra to Florida’s swamps. For some, the circle is sacred; for others, the square is sacred; for some, the salmon or the whale are sacred; for still others, wild rice or the cultivated corn plant are sacred.

Still, the many religious traditions indigenous to North America share the distinctive dynamics of, first, orality and, second, profound connections to specific landscapes and lifeways tied to living well on those landscapes. These shared characteristics produce a rich variety of highly sophisticated traditions of religious belief and practice, but they also produce religious traditions that are highly— make that profoundly— local, and thus set in sharp contrast to the universalizing claims of missionary Christianity. Joseph Epes Brown called the ethos of religious relativism that belongs to many indigenous traditions “non-exclusive cumulative adhesion,” a term whose very awkwardness suggests the ill fit between wooden analytical abstractions of systemic religion and supple indigenous traditions of practice.2 Sam Gill and others have noted that Native religions proceed more in terms of the logic of religious practice than they do in terms of the logic of insistence on orthodoxy or theological consistency. These approaches each suggest in their own ways that aboriginal religions have predisposed Native people to regard missionary Christianity as a resource among others rather than as the all-or nothing tradition that missionaries so consistently proffered.3

Secondly, the diversity of Native American Christianity owes much to the variety of encounters with missionaries representing the whole gamut of American Christendom: Roman Catholics, Protestants, Russian Orthodox, Moravians, Mormons, Pentecostals, and others. Missionaries represented the great variety of distinctions their respective denominational traditions carried in terms of doctrine, ritual, and ethos. Added to denominational variables are those of historical context, and especially of the particularities of the relationship between missionaries and the agencies of political, economic, and cultural colonialism extended over nearly 400 different treaties and successive waves of U.S. Indian policy.

What resulted when diverse peoples with varying aboriginal religions encountered a diverse group of Christian missionaries is a bewildering range of idiosyncratic Native Christianities, but as recent case studies have emphasized, the array is no mere product of the variables of Native religions meeting different denominations; it also results from the resourceful and creative capacity of Native Christians to make of the missionaries’ beliefs and practices something new. In this respect, as a number of recent studies have ably shown, the story of Native Christianity is not only irreducible to missionary history; it often meaningfully begins only after the missionaries (not to mention their prodigious correspondence) have left, and along with them the historical record.4 Bonnie Sue Lewis tracks the religious history of Christianity among Dakota and Nez Perce communities following the 1862 Dakota uprising, on the one hand, and the 1847 death of the Presbyterian Whitmans in Oregon Territory, on the other. Mission historians have frequently taken such events as emblematic of “missionary failure,” but Lewis takes them as the starting points for her history of the creative process by which Native clergy struggled to produce and maintain a faithful Christianity of their own. She begins with the religious revivals led by indigenous Christians that followed closely on the heels of these purported “failures” and traces the indigenization of Christianity through the 1930s. “While missionaries were at the forefront of bringing Christianity,” Lewis writes, “it was the Indians themselves who established Christianity among their own people.”5

If Lewis’s observation seems rather unsurprising, the evidence to support it has demanded much of historians, often requiring facility with oral tradition and the fieldwork and community relationships upon which access to such oral tradition typically depends. But in paying attention to how they made the Christian tradition their own, one finds that these communities often have drawn resourcefully on their indigenous traditions and idioms not so much to translate Christianity as to transpose its narratives and practices into the distinctive idioms and structures of Native religions, oftentimes in ironic relation to the intentions of European American missionaries. If consideration of the fuller diversity and texture of Native Christianities can be no mere coda to the history of missionary encounters and exchange, it certainly cannot but begin there, for the variations on Christian belief and practice of previous generations and efforts on the part of indigenous intellectuals to articulate sovereign theologies and theologies of sovereignty reckon in no small part with an experience common to Native American communities in all their diversity: that of the close, often symbiotic relation between Christian missions and colonialism.

2. Joseph Epes Brown, The Spiritual Legacy of the American Indian (New York: Crossroad, 1984). “Ethos of religious relativism” is a turn of phrase associated with John and Jean Comaroff, Of Revelation and Revolution: Christianity, Colonialism, and Consciousness in South Africa (Chicago: University of Chicago Press, 1991).