Should Christians Own a Gun?

The act of self defense in association with the use of a gun is a topic that remains highly controversial amongst society – especially Christians. 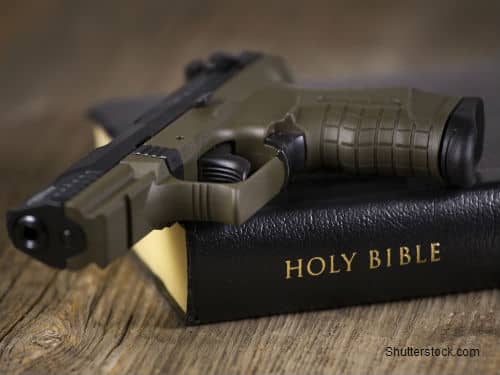 Self defense is defined as the defense of one’s person or interests, especially through the use of physical force, which is permitted in certain cases as an answer to a charge of violent crime. Nowhere in the definition is the act of vengeance mentioned. However, it does discuss the element of maintaining your safety and the need to defend your life at all costs.

The act of self defense in association with the use of a gun is a topic that remains highly controversial amongst society – especially Christians. Followers of Christianity have received Christ as their savior and believe in his teachings. The term “Christian-like” is used when people describe an individual’s behavior, activity and speech. Christians are not Christians simply because they attend church every Sunday. Moreover, they are Christians because they carry the values that God deems as acceptable and they practice righteous elements of life because of his mercy.

When Christians are conflicted they should turn to scripture and find truth and relevance within the words that speaks truthfully to their Christian faith and beliefs. Self defense is not about wartime, capital punishment or a righteous revolution instead it’s about self preservation and the act of protecting God’s sacrifice.

1 Corinthians 6:19 states, “Or know ye not that your body is a temple of the Holy Spirit which is in you, which ye have from God? and ye are not your own; for ye were bought with a price: glorify God therefore in your body.” Our bodies belong to God and in reality our life is his property. Just as we are not to abuse or subject our bodies to drugs and other extremities, it is not deemed fit to knowingly allow another being to commit a crime that will destroy God’s property. It is impossible to control the actions and feelings of others therefore you must use your Christian judgment and act in the best interest of your life.

In Psalm 82:4 it says, “Rescue the weak and needy; Deliver them out of the hand of the wicked.” God knew that there would be people who would act out against Christianity and not accept Jesus Christ as their savior. There is no reason why the good should succumb to the wicked no matter what forces of nature they possess at the time. Again, self preservation is the key and the need to bring down evil is the only way to not allow Jesus’ sacrifice to not be in vain.

Another well known passage is Ezekiel 33 which states, “But if the watchman sees the sword coming and does not blow the trumpet, and the people are not warned, and a sword comes and takes a person from them, he is taken away in his iniquity; but his blood I will require from the watchman's hand.” Christians must serve as God’s watchmen and be prepared to serve under his command.

God cannot stop the bad from occurring nor can he save individuals who do not want to be saved. Therefore, it is the duty of Christians to step up and protect themselves and the individuals around them from the evil that comes.

Owning a gun does not mean you’re vowing to kill or condoning the death of another. The right to bear arms is a decision that every Christian must make for themselves. If a Christian believes that having a gun will provide them with the security they need to protect themselves and others then that is their prerogative and through scriptures is sanctioned. However, as a gun owner you must be willing to use a gun as a last resort and the act of firing a weapon should be done as a means of protection not an act of anger or vengeance.