Is It Possible to Be Pro-Gun and Pro-Life?

The answer may be hard to swallow. 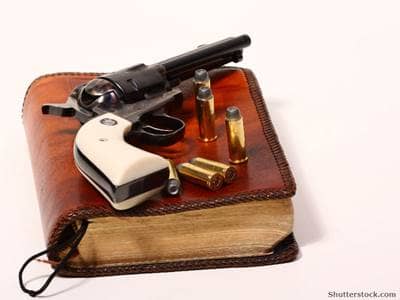 In the film “Armor of Light” Reverend Rob Schneck, an anti-abortion activist positioned on the political far right breaks orthodoxy when he questions whether being pro-gun is consistent with being pro-life. He is shocked when his long-time friends and colleagues tell him he should stay away from this politically explosive issue. But he decides to go against their warnings and the grain and bravely attempts to get others to consider America’s gun culture through a moral lens. This film brings to the forefront the question: Is it possible to be pro-gun and pro-life?

Gun violence continues to be a major concern in America and an issue the government has been forced to address, particularly in recent years. As the U.S. continues to face the realities of rising mass shootings and other firearm incidents in a country with nearly as many guns as people, gun violence remains a hot-button issue, particularly among conservative Christians. The idea that pro-gun and pro-life may not be able to sit in relationship with each other is a hard pill to swallow. Those who argue pro-gun and pro-life believe it is an essential liberty to obtain temporary safety, and the decisions of others who recklessly use firearms should not have an impact on their constitutional rights and freedoms. But as statistics on U.S. gun violence reveal how routine mass shootings and other firearm incidents have become, it’s hard not to re-examine this question. If you don’t think there is any merit to Schneck’s argument, maybe it’s time to turn to Scripture.

One of Jesus’ teachings on the sin of violence may be a good starting place. In the Sermon on the Mount, Jesus said, “You have heard that it was said to the people long ago, ‘Do not murder, and anyone who murders will be subject to judgment.’ But I tell you that anyone who is angry with his brother will be subject to judgment.” (Matt. 5.21-22). Before the gun is fired and blood is spilled, the sin of violence has already taken place. It is impossible to talk about murder in this country, along with shootings in schools and movie theaters without talking about how our country is infected with so much hatred, malice and anger. You can look at any of these gun violence cases and see how troubled these individuals were. They didn’t feel as if their lives were of value, so they refused to value others. While our freedoms should be protected, our lives should be too.

As Schneck suggests, it’s time to view to consider America’s gun culture through a moral lens. Many of us are so quick to jump to the defense of our constitution that we forget about the value of the lives of our brothers and sisters in Christ. Many who side with pro-gun/pro-life will argue that condition of violence in this country is outside of our control – that demanding the government to do something is a mute point – that the government passing certain laws related to gun violence will not correct certain behavior by these “lunatics” who have chosen to attack others. But when you look at the root of this violence, you see that it’s not only the rebellion of God and His laws that is causing the problem. It is also the refusal to take on gun violence as a crime against our own humanity, a far bigger issue.

There is no reason that 294 mass shootings –defined as an incident in which four or more people are killed or injured by gun –have taken place in 2015 alone. That’s more than one per day. There’s no reason that 45 shootings at schools, and 143 incidents since the massacre at Sandy Hook Elementary School. When we look at this as a moral issue, we no longer see these statistics in the form of numbers but as individuals who lost their lives too soon. You begin to see that this was somebody’s brother, somebody’s sister, somebody’s child. Turn to Scripture. Mark 12:31 tells us that we should love our neighbors and that there is commandment greater than these. This means loving our neighbors enough to ensure that they are safe. It’s time to reexamine gun violence in America and challenge America’s gun culture. God wants better from us.