Christianity contributed considerably to medicine. Physicians like Luke not only cared for the body, but for the souls of the community. 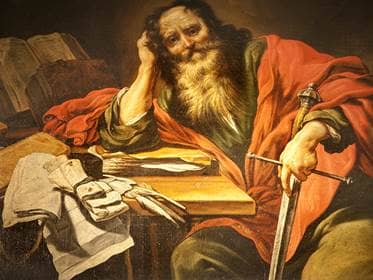 Christianity contributed considerably to medicine. Physicians like Luke not only cared for the body, but for the souls of the community.

“Luke, who was by race an Antiochian and a physician by profession, was long a companion of Paul, and had careful conversation with the other Apostles and in two books, left us examples of the medicine for the souls which he had gained from them.”

News spread how many believers were taking the widows, and the unwanted in, like the followers of Jesus. After a catastrophic plague hit during the third century in Roman, killing five thousand people per day, people panicked.

The “plague of Cyprian” was gruesome and many people were thrown into the streets to die from smallpox. Pagan leaders took note and decided to care for the people the way the Christians did. This charity by believers helped establish the hospitals. There was a hospital, but this was offered to Roman soldiers. But Christians reached out to all people suffering and this helped spread the religion in Rome and in the region through simple compassion.

Early Christians and writers from other religions also preserved medical records. It was the Jewish and Christian scribes that copied documents on medicine, surgery and health remedies from the Ancient Library of Alexandria in Alexandria in Egypt before it was burned down.

Many manuscripts and records were lost as well as cultural records. This paved the way for doctors like the father of physiology Albrecht von Haller, a Christian during the 1700s’ to have a foundation. Haller also believed in using what God had given us through nature to cure and treat people as well as traditional medicine.

“Of course, firstly the remedy must be proved on a healthy body, without being mixed with anything foreign; and when its odor and flavor have been ascertained, a tiny dose of it should be given and attention paid to all the changes of state that take place, what the pulse is, what heat there is, what sort of breathing and what exertions there are. Then in relation to the form of the phenomena in a healthy person from those exposed to it, you should move on to trials on a sick body.” There is a misconception that early Christianity dismissed early medicine.

Gary B. Ferngren is an ancient history professor at Oregon State University. He wrote extensively on the first five centuries of Christianity.

He said in an interview with the Oregonian that this assumption is false and deadly.

“There is a widespread view that Christians rejected secular medicine, and it simply is not true. Most Christians understood that disease was caused by natural processes, not demons."

The church would offer help for the physically ill. They used herbs, teas, and plants to heal the body. Bitter herbs, aloe, cinnamon, common, turmeric, mushrooms, and garlic were used to in ancient times for healing.

Doctors would recommend for the sick a regimen of:

“Diet, sleep, baths, rest, clean air, water that was pure. It sounds naturopathic today. The germ theory of disease was unknown. Most physicians didn't know a lot about internal organs. But the Romans developed surgery; they were especially good at removing cataracts,” said Ferngren.

“They could remove kidney stones very effectively. There was much that a physician could not do, and physicians realized that. Hence, they refused to treat diseases that they could not help.”

Early health care in Christianity combined the supernatural and brought healing through herbs, foods, oils, and ointments. Today it remains true. God is still using doctors to help heal people just like he did through Luke to touch people. He also gave us the Bible to use to help guide us, and Christians to help be the foundation of today’s modern medicine.