How to Gain Victory Over the Powers of Darkness

Many of the problems you deal with come directly from the realm of darkness. They are demonic. However, there is freedom in knowing you can overcome these problems. 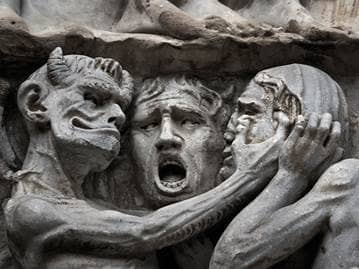 This article was adapted from Self-Deliverance: How to Gain Victory OVER the Powers of Darkness by Rabbi K. A. Schneider. Used by permission of Chosen Books.

What Are Demons?
Every person who is alive is struggling against the darkness that is operating in our world. When we speak about darkness, we might imagine a general sense of the power or force of evil. But when we speak about demons, we are talking about actual creatures. These dark beings are fallen angels, servants of Satan that were cast out of heaven with him.

Then another sign appeared in heaven: and behold, a great red dragon having seven heads and ten horns, and on his heads were seven diadems. And his tail swept away a third of the stars of heaven and threw them to the earth. . . . And the great dragon was thrown down, the serpent of old who is called the devil and Satan, who deceives the whole world; he was thrown down to the earth, and his angels were thrown down with him. - Revelation 12:3–4, 9

Demons have intellect; they have motives; they have personalities. Generally, their personalities exhibit the types of sins that we see here on earth. In other words, individual demons show characteristics of anger, lust, thievery, self-loathing, sarcasm and on and on. These dark angels are the enemies of our souls. Like Satan they hate all of humanity because we have been created in God’s image.

When we see pride and envy and all manner of evil around us—and sometimes directed at us—we need to understand the source of these things and who the enemy really is.

Which Demons Target Us?
There are things we do, as well as things that are done to us, that can draw demons to us. If we have not closed the doors of access, they can come in and attach themselves to us. The story of Jesus healing the demoniacs in the book of Matthew shows how demons are drawn to and seek to express themselves through flesh and blood.

When He came to the other side into the country of the Gadarenes, two men who were demon-possessed met Him as they were coming out of the tombs. They were so extremely violent that no cone could pass by that way. And they cried out, saying, “What business do we have with each other, Son of God? Have You come here to torment us before the time?”

Now there was a herd of many swine feeding at a distance from them. The demons began to entreat Him, saying, “If You are going to cast us out, send us into the heard of swine.” - Matthew 8:28–31

Though demons can inhabit animals, they want primarily to link themselves to human beings. Demons can attach themselves to the mind or any part of the body. They generally attack and gain entrance through our thoughts.

Which demons do we attract? Any sinful behavior opens the door for demons of that type to gain entrance and lodge themselves within us.

Say that a woman has a problem with gossip. She does not control her tongue and yields to this sin more and more easily. Her behavior is going to catch the attention of a demon who feeds on gossip. Now she has a bigger problem to overcome.

Or say a man steps outside of God’s boundary of marriage in the area of his sexuality. He yields to the lower nature and falls into adultery. Now he has taken a natural and beautiful gift that God has provided and turned it into an act of selfishness that attracts demons of lust and perversion. His mind and body will be energized by the demons that attach themselves to him.

Or take something good like food. There is obviously nothing wrong with enjoying food. God is a God of pleasure. He created tongues and taste buds. This is part of His goodness. But if we allow ourselves to be overcome by the flesh and fall into gluttony, we are going to attract demons whose personalities feed on gluttony. They will wrap themselves around our thinking and dominate our actions. This leads only to despair.

Rabbi K. A. Schneider is a Jewish believer in Jesus and host of the television show Discovering the Jewish Jesus, which broadcasts into millions of homes in the United States and nearly two hundred countries around the world. Rabbi Schneider leads the congregation Lion of Judah World Outreach Center. He and his wife, Cynthia, live in Ohio.