Faith In The Fog Excerpt

When our faith wavers, how can we get back on track? Christian author Jeff Lucas helps us understand how to overcome. 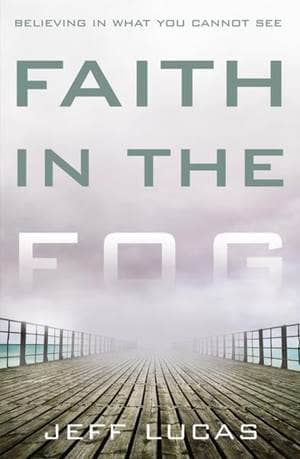 Taken from Faith In The Fog Copyright ©

But those words had triggered a revolution in Peter’s life three years earlier. And absolutely everything changed for him when he responded to Jesus’ invitation. In issuing the call, Jesus laid out no route map and outlined no detailed plans. It really was a leap of faith for Peter.

The call was not to go somewhere, but rather to be with someone, and so all Peter knew was that he was being invited to be with this marvelous, mysterious Jesus, and that from then on he’d “fish for men.”

In the heady three years that followed, Peter experienced so many emotions: Everest summits when revelations dawned on him without warning; Death Valleys of despair as he’d battled bewilderment and disappointment — mainly with himself.

He’d tried hard to make sense of the unpredictable friend and rabbi who stood with him there on the beach. Jesus had been like a mirror to Peter, showing him the uncomfortable and, at times, ugly truth. Jesus had unlocked the very secrets of the universe to this Galilean fisherman. And now, there was blood on the horizon.

If Peter could have caught the slightest glimpse of what was unfolding for him in world history, he would have been staggered. As he and Jesus strolled along the beach, the sun slowly inching higher in the day, Peter was a history maker in the making. But he didn’t know that then and certainly couldn’t grasp the fullness of what that looked like.

There had been moments of decision before, times when he could have just walked away, abandoned the rabbi, gone back to the family business, and gotten on with his life. But when a whole swathe of Jesus’followers had decided to abandon him, appalled by some of his sayings, Peter and the eleven had decided to stick with him.

On hearing it, many of his disciples said, “This is a hard teaching. Who can accept it?”

Aware that his disciples were grumbling about this, Jesus said to them, “Does this offend you? Then what if you see the Son of Man ascend to where he was before! The Spirit gives life; the flesh counts for nothing. The words I have spoken to you — they are full of the Spirit and life. Yet there are some of you who do not believe.” For Jesus had known from the beginning which of them did not believe and who would betray him. He went on to say, “This is why I told you that no one can come to me unless the Father has enabled them.”

From this time many of his disciples turned back and no longer followed him.

“You do not want to leave too, do you?” Jesus asked the Twelve.

Simon Peter answered him, “Lord, to whom shall we go? You have the words of eternal life. We have come to believe and to know that you are the Holy One of God.”

Peter had himself pledged ongoing commitment to Jesus when many were walking away.

Perhaps he made his confession of faithfulness with a firm voice and sparkling eyes. Or did he pledge allegiance with mixed feelings — a statement of faith made with a shrug of the shoulders, a sigh of resignation, a dogged determination to go with what was right regardless of how he felt? It must have been tough to see so many leave. Were those who walked away all deluded and the few that stayed behind so enlightened? Should he vote with his feet too?

When Jesus had announced his fateful decision to head for theintimidating city of Jerusalem, Peter and the others had opted to go with him, despite an ominous atmosphere that lingered at that time. Thomas, sadly more famous for doubting than bravery, made a courageous pledge: “Let us also go, that we may die with him.”

But now another juncture moment had arrived. The past was the past, and it was becoming increasingly obvious that Jesus would not be with Peter and his friends in person much longer. Everything was changing. Within weeks, Jesus would be going away.

From then on, Peter would be walking with Jesus — not at all in the way he had, but rather in the way that we do. He would continue to communicate with the man who had presided over the miraculous breakfast, but through prayer, a fantastic, bewildering concept for Peter to grasp, if indeed he’d even begun to grapple with it at this stage. No longer would he see that familiar face; instead, he would have to trust that his friend and rabbi still heard him: a walk of faith.

It’s one thing to suffer when you’ve got Jesus right there at your side, steering you, correcting you, comforting you. Jesus. Close. It’s quite another challenge to walk into a painful future with the knowledge that he would not be there in the same way at all.

Another “comforter” was coming to take his place, Jesus said. The Holy Spirit. Did Peter think: Thanks, but no thanks? You stay, Jesus; you’re who we want.

No wonder Jesus constantly assured his friends that he was going to be with them always. Their greatest fear was realized because, having gone away from them once, to the cross and to death, now he was going away again.

The disciples were becoming apostles, moving into an entirely different phase of their mission — and Peter was being shaped, perhaps to his surprise, to assume the role of key leader of the little apostolic band. And so with the additional news that it would ultimately cost him life itself, the old call — the very same invitation — was renewed again for Peter: follow me.

Yesterday’s pledges were not sufficient for this totally new phase. Jesus sought a fresh response, not least because the promise that Jesus made was quite radically different: three years earlier, Peter had been promised that he’d fish for men.

Are you still up for this, Peter?

Everything was different. It had been here, on the Sea of Galilee, that Peter had walked on the water to reach Jesus — and sank, dunked by his fears. Today, he’d had to wade through the water to get to Jesus.

I know which I’d prefer.