Does this Prove that Jesus Existed?

Mark Antonacci has studied the Shroud of Turin or the Turin Shroud for 34 years, and founded the Test the Shroud Foundation, which advocates and funds the most significant science research. But does it prove Jesus existed? 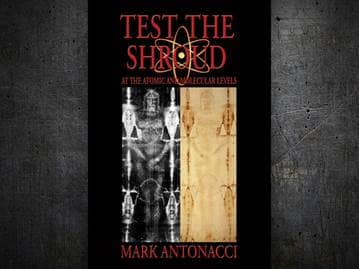 Mark Antonacci has studied the Shroud of Turin or the Turin Shroud for 34 years, and founded the Test the Shroud Foundation, which advocates and funds the most significant science research. Can his work prove this is Jesus?

“The foundation does not think the Shroud needs to remain a mystery or that its unique features are unsolvable. It argues that modern sophisticated testing in the field of nuclear science can definitively answer the questions relating not only to the provenance of the Shroud, but also the startling events that occurred to the man who was wrapped within this burial cloth.”

Antonacci, an attorney by trade, was an agnostic, but he was intrigued by the shroud. The newspaper article that piqued his interest on the controversial linen cloth would become a doorway that led him to Christ.

“It gave me a basis for salvation.” His landmark book, Test the Shroud, will reveal the science at the atomic and molecular levels. However, scientists may not be able to duplicate the 130 blood marks and off- images on both sides of the cloth, but Antonacci hopes to change this.

There are 30-plus features on the cloth. What stunned him was the three-dimensional information was encoded on a two-dimensional cloth. It was encoded with a vertical straight-line direction from the body to the cloth. “You certainly can’t paint like that.

For 500 years the shroud was dismissed as a painting. The only agent that can account for these features is radiation and that occupies about 10-15 years of his investigation.

“Examples like skin, hair bones, skeletal features are encoded—it takes something like radiation to operate on all these surfaces. There is no other naturalistic experiment were you’re going to get as remotely close to this. The good thing about the naturalist and artistic hypotheses is you can test them. ”

In Egypt burial garments are very common where conservation of bodies is better preserved in a dry climate. There is nothing remotely close to it. People are draped in all kinds of cloths and if there were blood stains, nothing was encoded like the shroud. The shroud is the most unique evidence of Christ in history. “It’s so unique and most of it cannot be forged,” he said. “The hardest thing to overcome about the evidence, I’ll be honest with you is once you overcome the fear and look at it objectively, the evidence is very consistent and very collaborating.

Over thousands of tests, only one has been inconsistent, which is the authenticity of being the garment of Jesus Christ. The hardest thing to overcome is the preconceived notion about a subject.” How do we know if this really the Lord?

Except for the radio carbon dating, all the evidence is consistent as “this was a man who had a full crown of sharp pointed objects, thorns placed over his head, he was scourged with an instrument, and he had a heavy rough object across his shoulders. He appears to have cuts on his knees and nose. He has a nail correctly in the wrist, in the feet; he has blood flow on his forearms.

He has a postmortem side womb. He was buried according to Jewish burial customs.

All the events appeared to have happened in the spring and in the first century.” There is a miracle radiation event that occurred to this body that gives off particle radiation as it disappears. That’s the clincher, Antonacci shared.

“You can test samples of the cloth to determine such an event occurred.”