Author Johnnie Moore strips away the preconceived and stereotypical impressions of God in his new book Dirty God. 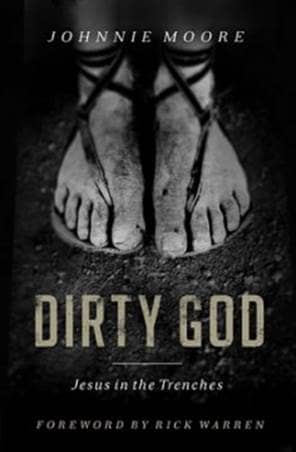 If you walked passed Jesus today, would you recognize him? Would he be roaming the busy streets of New York or would he be sitting on a park bench in Virginia? When you think about Jesus, odds are you don’t envision a man covered in dirt and smelling of sweat because that’s not the “holy” image that’s painted on murals or books. Johnnie Moore, the author of Dirty God, has set out to introduce the world, to what he believes, is the correct persona of Jesus. Moore discusses how grace is the defining element in our relationship with God and explains the rationale behind his image of Jesus.

Why the title dirty God?

While controversial to some it is actually totally orthodox. The title depicts an image of a God with dirt underneath his fingernails, a God with dirty hands who plunged himself into humanities problems, and decided to clean the world by joining man in its trenches. Jesus is the God who became dirty so that the world might be made clean, and he calls us to follow his example. We ought leave our sheltered sanctuaries and get in the mess of the world, with Jesus. When we do, the world will change for the better.

What inspired you to write the book Dirty God?

This is a book about God's kindness, and in it I teach about grace by emphasizing the humanity of Jesus. For thousands of years, Christians have believed that Jesus was both fully God and fully man, but we have explored less the implications of his humanity. I decided that I would write a book on the grittiness, and everydayness, of Jesus because I believe that a glimpse into the way Jesus lived his life should give us an idea of how we might live our own. So I, for instance, write about the vagabond of disciples that Jesus intentionally recruited, and about the fact that Jesus' arrival in near obscurity and peculiar lifestyle were an affront to the prevailing images of that time of greco-roman gods with super-human powers (and even physiques). Jesus chose to be the God that looked like men on the chance that men would be interested in a God that looked like them.

What is your opinion on the future of faith for American millennials?

I'm beyond optimistic. I believe the millenial generation is costum designed to take the greatest good to the world at the precise moment when we can actually see the completion of Jesus' Great Commission. This generation is the most global and technological in history, they are cause-oriented and deeply emphatic. They are moved to move people into a better place, and they are doing it and they want to do it now. It's hard to not be optimistic when you're in the trenches with millenials. At Liberty University, where we have nearly 100,000 students studying on campus and online, I've seen it firsthand, and I've seen it in other places too. I began this year, in fact, by standing in an arena with 65,000 Christian college students at Passion 2013 who are determined to worship Jesus and end human slavery, now. It's hard to experience these type of things and not believe that rumors of spiritual death among the next generation are highly exaggerated.  God is moving in an amazing way, and I'm convinced histories will write about these days.

Define grace. Why is it so important?

I define grace simply as "God's kindness toward us." It's evident in it's most exaggerated form in Christ's death and resurrection, covering our sins and saving the world, and it's also evident every time you give an extra dollar to someone in need. Grace is both gotten and given, and grace is how God has demonstrated his kindness toward us.

If only one thing/concept, what do you want your audience to take away from your book?

Jesus' grace split time in half and made a broken world into a playground for the goodness and kindness of God.

How can we give each other grace?

Will giving grace make a difference in the world? Why? I believe if the world's billion-plus Christians began to give a little more grace to the world, then it would change over night. It happens in the smallest ways (like when we take others' needs personally or pray for those who are heartbroken or drop an envelope of cash on the desk of a single mom), and it is also demonstrated in the most grandiose ways, like when the collective effort of the church decides to eradicate the issues on planet earth that are effecting billions (not millions) - things addressed in Rick Warren's "Peace Plan," like spiritual darkness, illiteracy, pandemic disease, ego-centric leadership, and abject poverty.