Can God Give Us a Winning Destiny? 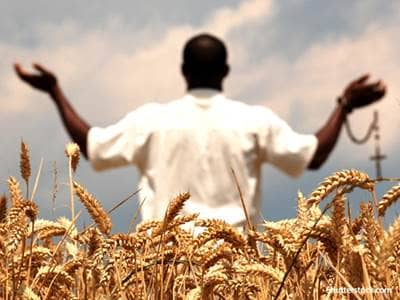 Does God take sides and help athletes or teams win? Well, I am not God, but I think I know the answer: I don’t think He picks winners in any competition. It may very well be that God has given someone a victory, but I am not sure I have ever witnessed it. But, certainly, God is in everything in our lives including our victories and defeats. The most dramatic differences God makes are in the moments when love rules our lives.

Winning takes a loving spirit willing to give up everything to God and others. A good athlete sincerely led by love will often beat a great athlete led by fear when the stakes are high. God is love and when He rules our lives, we are truly all we can be, and we are not moved by fear, no matter what.

It’s not until we say, “Never mind winning. All I have and do is for God and others—win or not,” that love begins to rule our lives; and winning, then, becomes our destiny.

This assumes, of course, that all things are mostly equal. If one person’s talent and training is significantly greater than another, it’s not reasonable to expect love will help the unprepared person win. But in most elite competitions, physical and mental abilities are matched close enough that I believe the difference is normally made by God—by the laws of love and fear that God put in place and instructs us to follow.

If one person or team is led by fear and the other by love, get ready to see one’s humble win or loss and the other’s prideful win or sore loss. If both competitors or teams are led by fear, then you will have one prideful winner and one bitter loser. If each is led by love, then get ready to witness the battle of a lifetime; and when it’s over, to see two humble and grateful finishers—win or lose. You see, love’s destiny is winning and it will take a lot to beat it. Fear’s destiny is losing and it will take a lot for fear to win. That’s how life works, because God created it that way.

John 4:18 says it best: “There is no fear in love. But perfect love drives out fear, because fear has to do with punishment. The one who fears is not made perfect in love.”

I’ve watched the last three Super Bowl competitions and picked the winners—those teams that showed the most love. It's not fail-proof because anything can happen. But the Ravens’ 2013 Super Bowl win is a prime example. The media called that win over the favored 49ers a “love story.” After the game, Ravens linebackers Ray Lewis and Brendon Ayanbadejo talked to the media about the players’ love for each other. Ayanbadejo told the media, “This may sound crazy because football is a tough sport, but it was love that put us over the top … It's something Ray Lewis has told us since day one: ‘What would you do for the man next to you?’ For us, the answer is, 'Anything.'”

Fast forward to last November when Ultimate Fighting Championship (UFC) superstar Ronda Rousey lost her fight to Holly Holm. We watched love and fear move beyond the rink. Rousey was described by the media as “boastful” and Holm, the more “humble.” After the fight, Rousey wouldn’t even congratulate Holm, and admitted publicly that she felt she was nothing after the loss, and thought about suicide. But Holm took up for Rousey in her media interviews, and spoke of how competent a fighter Rousey is and that she wished her no harm. Holm showed love for her opponent, while Rousey seemed totally consumed with the bitter fruit of fear.

What does the Bible tell us about winning? These scriptures show the larger context of winning, and how love allows us to put God and others first in any contest. That’s really the win, no matter the contest outcome.

Wins can be blessings or burdens

Competing merely for the sake of winning is like putting water instead of gas in your race car, hoping it will make you go faster. To win, we will give all we have. For God and others, we will give more than we ever knew we had. That’s how God designed us to function.

If we make every contest about ourselves, the losses are heartbreaking and the wins can be burdensome. When we win for ourselves, our own so-called victory is small and carries fear in the responsibility to try and keep winning. That can be more of a nightmare than anything, stealing joy and causing you to wonder why you ever wanted to win in the first place.

So, does God help people win? Absolutely; and not only does God help us when we give the win and the glory to Him, the win comes with no burden. It’s all blessing.

I’ve choked on that bitter fruit of fear

For 15 years, I got on my knees and prayed God would help me win a national water-ski jump championship. I really thought I was prepared and ready. I just needed God to give me favor and put me over the top. I do believe God answered my prayers, but not like I expected. It took my wife Tammie years to help me understand God’s word, and how to make sure love, not fear ruled my life.

In the heat of national competition, I finally realized my technique and training would never be enough to move me beyond the fear. In that moment, waiting my turn at the U.S. Nationals, I said to myself, “Never mind the gold medal, I just want to do the best I can for you, Lord, win or not.” When I said that, the realization hit me like a ton of bricks that I suddenly had a higher calling with no chance of failing.

In a moment, I was free to give my all with no fear to hold me down. Winning wasn’t my whole life at that moment. The competition wasn’t about me. I took myself out of the competition and put God in.

That day, I failed on my first two attempts to jump. I had no chance to win on that third and last jump. I was hurt and my equipment was damaged. I should have been more afraid than ever; but instead, I finally really felt secure, bolstered by an inexplicable lack of fear and an incredible sense of power, love and soundness of mind.

God gave me a gold medal and so much more

That day, I won the National Water-Ski Jump Championship for God. My dream came true, not because God swooped down and carried me up the ramp and gave me the longest jump, but because God’s word is true and, that day, made me all I could be. And it was more than enough. God clearly showed me He was in the win, not me. I believe God helped me win because He had something bigger for me and He knew he could use that win to bring others to trust Him. And so He has.

Kenny Vaughan is the CEO and founder of Shields of Strength , a company that empowers people through its scripture-engraved jewelry. Kenny found strength and purpose in God during his trials as a national water-ski jumping champion. Now his passion is to help others find that same strength.