Is there Biblical admonition to not celebrate one’s birth? 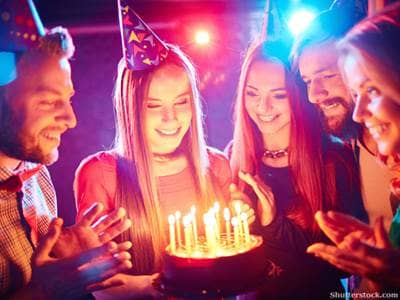 In almost every culture around the world, celebrations of life take place and arguably, nothing is as universally celebrated as the birthday. But whether Christians can or should celebrate birthdays has been a topic of debate in the religious space. While some take the stance that you’re simply glorifying another’s life, others believe it is a form of Idolatry and celebrating it takes away from the admiration and glory of God.

But what does the Bible say about it?

Nowhere in Scripture is the observance of birthdays condemned as sinful or prohibited, and birthday observance as a doctrine is not mentioned in the Bible. However, there are people who claim there is indirect evidence that birthday celebration is a sin and shouldn’t be celebrated by Christians. They generally make the following claims:

First, when the Bible mentions birthdays which it has on three separate occasions, terrible things occurred. The first mention is in the Book of Genesis. Pharaoh, who was the Egyptian kind, celebrated his birthday by executing his butler and chief baker (Gen. 40:1-23). Joseph was given a special interpretation of the incident by God through a dream, and was told through this dream that Pharaoh would use his own birthday occasion to take his baker’s life and it would come three days after he interpreted the dream. The baker was hung at the party just as the dream foretold.

The next time a birthday is mentioned in the Bible is in the New Testament in the book of Matthew 14:3-11 when Herod the tetrarch grudgingly ordered the beheading of John the Baptist. Verse 6 mentions when Herod’s birthday party, in which he got carried away and made a promise that he later regretted but couldn’t back down from. Because of this, John the Baptist, a great figure of the Bible’s life was taken.

The last mention is in the Book of Job, with an account of a celebration that took place by Job’s children. The Bible says in Job 1:4 that Job’s seven sons “went and feasted in their houses, every one his day; and sent and called for their sisters to eat and drink with them.” This celebration brought Job a spirit of concern and when this period of feasting had run its course, Job planned to make arrangement for them to be purified by sacrificing a burnt offering in the morning, thinking that his children had sinned and cursed against God in their hearts. We later learn in this story that during the birthday party celebration of Job’s older son, all of Job’s 10 children lost their lives by a mighty wind that struck and collapsed their home. As you progress to Job 3, you see a very pained Job, in which he spends much of his time cursing his birth. The loss of all his children left him in a state of shock, while also sobering him, bringing him to a place where he cursed the day he was born, acknowledging there was nothing good about his own birth.

While these three incidences resulted in murderous executions, they don’t show or prove that the proper observance of a birthday is displeasing to God. Remember, Pharaoh and Herod both executed as they pleased. Job’s children lost their lives due to a natural disaster, and while this event troubled Job greatly, he grew a great deal through this experience. While these events took place on their birthdays, this doesn’t mean that it is wrong to celebrate your birthday.

Some point to the origin of birthdays as a reason that Christians shouldn’t celebrate them. Birthday celebrations are originally of pagan origin, and came about through the practice of astrology. Thousands of years ago, these pagan astrologers invented calendars and calculated birth dates for kings, rulers and their successors through the monitoring of the stars; they examined horoscopes and birthday omens because they thought the fate of those in positions of power would affect all society. Because of this, many people put their trust in horoscopes over God. But just because something is of pagan origin doesn’t mean we agree with their belief system or it shouldn’t be observed for this reason. Some pagans traditionally participated in sinful activities at weddings and funerals, but that doesn’t mean we shouldn't practice them. These factors shouldn’t stop us from having birthday parties as long as we reflect those celebrations with the right values and keep God in mind.

Everyone has a birthday with millions of Christians celebrating this momentous occasions each year. While this doesn’t mean that because so many people observe it, it makes it ok, but when we turn to Scripture, it doesn’t tell us that the celebration of life is a sin. Birthdays are similar to anniversaries, and we celebrate so many of them in our culture: weddings, dates of employment, even when our congregations are founded. Birthdays are just as acceptable. Remember, God calls us to celebrate life abundantly (John 10:10), that includes our own lives which God chose for us before we were even born. Why wouldn’t God want us to acknowledge that we are thankful for the blessing of life? As long as what we are celebrating is not idolatrous, out of line with Godly values and does not take away from the glory of God, it is ok for us to celebrate them.