GOP candidate Ben Carson remains steady in the polls, and the media explores his religion as an Seventh-day Adventist. 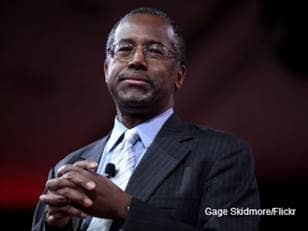 GOP candidate Ben Carson continues to keep a steady pace for the race for the White House. According to polls, Carson is tied with Donald Trump, but conservative Americans have gravitated more towards the retired neurosurgeon in terms of popularity. Carson edges Trump by two percent with 71 percent compared to Trump, ABC News reported on Nov. 10.

While the race is going on for the nomination—the media is also looking into the faith of all candidates--nothing new. Carson is a Seventh-day Adventist, and many are unaware of what the religion entails. Even the Donald was stumped about the faith.

Adventists believe the entire Bible. The believe that Jesus Christ in the son of God. They believe God creates, and redeems. They also believe that our bodies are the temple of God, so health and holiness are very important. They believe observe that Saturdays are the Sabbath according to the Bible.

Pastor Steve Wohlberg is a Seventh-day Adventist minister and the Speaker/Director of White Horse Media said in a press release that Adventists are “in harmony with 400 years of Protestant scholarship (including Presbyterian, Trump's church)-interpret "the beast" in the book of Revelation to be a symbol of the Roman Church.”

The Seventh-day Adventist church has not endorsed Carson as they believe in the separation of church and state.

Carson believes in the power of faith, a deep relationship with God, but doesn’t believe to be religious.

"I'm not really into a lot of religious dogma and rituals-- 'you can't do that, and you can't do this.' I don't believe in that. I believe you have to have a deep and abiding faith in God."