These cliches halt meaningful dialogue in its tracks.

The Christian Church is losing members at an alarming rate. A quick glance at statistics from the Pew Research Center puts that number in the millions—a number that threatens to grow as time goes by. This is due to a number of factors, but one of the biggest is the way in which the Christianity is perceived.

When people think of Christians, they often think of judgmental, angry, unpleasant individuals who are out of touch with contemporary life, and unfortunately, there are certain things Christians tend to say that reinforce these assumptions. This has to stop.

The essence of God is all-encompassing, unconditional love, and the statements we make as Christians need to reflect this. This doesn’t mean that we’re permissive, but it does mean that we are kind and respectful and honoring in the things we say. In doing so, we correctly represent God to the world as something to be drawn toward, not something to be repulsed by.

Among the things Christians shouldn’t be saying, there are a few that really stand out—statements that deeply hurt, dismiss, or disrespect others, and simply end what could otherwise be a fruitful conversation. Let’s take a look at these 8 things Christians should never say so that you can become a better representative of God and draw people back into His church.

If there’s one thing that’s a sure conversation stopper, it’s telling people that they’re going to Hell.

It’s one thing to teach about the nature of Hell, but it’s quite another to claim to know God’s will for someone’s afterlife. The thing is this: you don’t know whether or not someone is going to Hell, and saying this ends any productive conversation about someone’s potential spiritual problems that might have occurred.

If you want to talk to a fellow believer about their behavior, this is not the best way to lead into the conversation. Instead, talk about the positive. Go over scripture that gives examples of what God expects of us, and help the person work through their problems. It’s not your job to condemn, so go ahead and strike this statement from your Christian vocabulary.

What’s more, saying this to a non-Christian paints the portrait of a hateful God who gleefully sends people into eternal, conscious torment for not submitting to His will.

Is this the God you want to introduce to the world?

The reality of Hell is much more complicated—and much more contested—than this oversimplified statement allows for, and does no good for those who are unfamiliar with Christian teachings.

Avoid saying this if you want to want truly engage with others—there are better ways of warning people about the consequences of their choices.

This statement doesn’t often directly take the form of “I reject you,” but its many variations pop up with alarming consistency.

“I reject you” can look like “We don’t want you in our circle of friends because you have a tattoo,” “This isn’t the church for you because of your political leanings,” or “We won’t speak to you because you’re pregnant and unmarried.”

The truth is this: we should be welcoming others—including the broken—into our churches and social circles instead of rejecting them. Just look at the example set by Christ—He spent time with people from all walks of life, and because He was kind and communicative, He won many of those people over.

There is a time to walk away from people, but those times are rare. Make an effort to look past someone’s exterior and see the beautiful human being God created—you’ll represent God all the better.

"It's True Because the Bible Says It."

"It's True Because the Bible Says It."

This is a tough one, because the Bible is, in fact, the true and inerrant word of God. And so, “It’s true because the Bible says it,” isn’t necessarily wrong, but the way in which this statement is used often is.

Consider this. Even within a single denomination, churches interpret the Bible in vastly different ways—this is because we are flawed human beings who are relying on our flawed human minds to interpret the word of God. We’re not always going to get it right.

And so it’s not useful to simply say, “Because the Bible says so” in a disagreement with another believer—you very well may be misinterpreting a verse. Instead, when someone challenges one of your beliefs, why not listen, and then look over the pertinent verses with them? If things don’t line up, one of you is wrong, and it very well could be you!

Using this statement on a non-believer is even more futile. Think about how you would respond if someone of another faith made a certain claim because their holy book “says it’s true.” Would you take their words at face value? Probably not—your beliefs aren’t rooted in their religion.

So instead of using a canned line in response to a non-believer challenging your faith, why not take the time to explain what you believe, and why you believe it?

Instead of stopping the conversation, you’ve just started one, and that is what makes a difference in people’s lives.

"Everything Happens For a Reason."

"Everything Happens For a Reason."

Imagine you’ve just lost a beloved family member. Now imagine that someone strides up to you, a smile on their face, clasps you by the shoulder, and says, “It’s okay. Everything happens for a reason!”

Not exactly the most comforting statement in the world, is it?

This is another conversation stopper. Instead of helping someone deal with a difficult event, saying this simply glosses over the problem with a meaningless saying.

What’s worse, it doesn’t portray God in the right way, because the implication is that God willed this difficult event into happening.

Sometimes, bad things happen because we live in a fallen world. Instead of stopping the conversation with this line, just be there for your grieving friend or family member, and you'll be able to better help them work through the pain of their loss.

Faith is something that every Christian should constantly strive and pray to have in abundance. But when something isn’t working out in someone’s life, telling them that it’s because they’re just not faithful enough is, well, just wrong.

Many of us buy into the idea that, since some people experience the miraculous through their faith, the fact that others do not experience these things means that they lack faith.

Of course, God has the ability to heal your body, repair your finances, or otherwise affect your life for the better, but this doesn’t mean that He always will. Sometimes, God has a very good reason for not granting us the things we wish for—from His divine perspective, He can see all ends, and knows what is truly good or bad for us in ways we cannot imagine.

Faith isn’t some force that we can bend to our will. No—faith is far simpler than that. It’s trust in God. That’s all. And sometimes, we need to trust that God’s decision not to grant someone what they ask for is the right one.

"God Will Never Give You More Than You Can Handle."

"God Will Never Give You More Than You Can Handle."

This problematic phrase is based on a misreading of 1 Corinthians 10:13, which reads, “No temptation has overtaken you except what is common to mankind. And God is faithful; he will not let you be tempted beyond what you can bear. But when you are tempted, he will also provide a way out so that you can endure it.”

Imagine saying this to one of the emaciated Jews liberated from a Nazi concentration camp. The Holocaust was certainly more than millions of people could handle.

And look at the Psalmists—the Psalms are full writers who lament the fact that they cannot handle their lives. Even Jesus, Himself, asked to be rescued from his impending crucifixion.

But while we can and do encounter situations we can’t handle, God can use these moments to help us learn to depend upon Him.

More than anything, though, instead of using this phrase, you need to be there for the people around you who are going through great pain. Don’t resort to a meaningless, canned saying. Be real. Be comforting. You’ll do a lot more good that way.

We not only give Satan way more power than he actually has when we blame all of our troubles on him, but we also avoid responsibility, ourselves, making this statement a decidedly bad choice.

It’s human nature to blame something outside of ourselves for our own mistakes, and so this phrase is attractive. When our car fails to start, it’s because of “Satan” rather than because “I forgot to change the oil for three years.” It’s easy to fall into the trap of seeing Satan in every misfortune, causing you to feel powerless in the face of a spiritual entity you cannot fight, but there is great power in realizing that you are in control of your life.

Instead of using Satan as a scapegoat for your troubles, try taking responsibility for what goes on in your life—you’ll soon find that things get better for you as you realize your life is mostly under your control. Own your mistakes, and you’ll be better able to learn and grow as a result of them.

Oh, boy. If there is any statement on this list that will instantly end any dialogue, it’s this one.

This is often thought to be something straight out of scripture, but actually comes from a 19th century hymn written by William Cowper, who wrote “God moves in mysterious ways.” And, indeed—God is very mysterious to us limited human beings.

But if you use this line to respond to someone who challenges your beliefs, that’s just plain lazy—it basically comes off as you saying, “Stop asking me difficult questions.”

Instead, try listening carefully to the challenge, and respond as best you can. Don’t end the conversation with a cliché—keep it going with an exchange of ideas.

To do this, however, you’ll have to become more familiar with your faith, preferably with the help of a mentor. After some reading, you’ll find that God’s ways are a little more explainable than you thought, and you’ll be ready with answers the next time someone puts you to the question.

There’s one thing that all of these statements have in common: they end dialogue. They’re the easy way out, as opposed to truly comforting someone or talking out your faith or accepting responsibility for your actions.

Don’t choose the easy road. Take the high path—the one that shows God’s true character to the world. Only then can you engage others in a way that allows them to know His goodness. 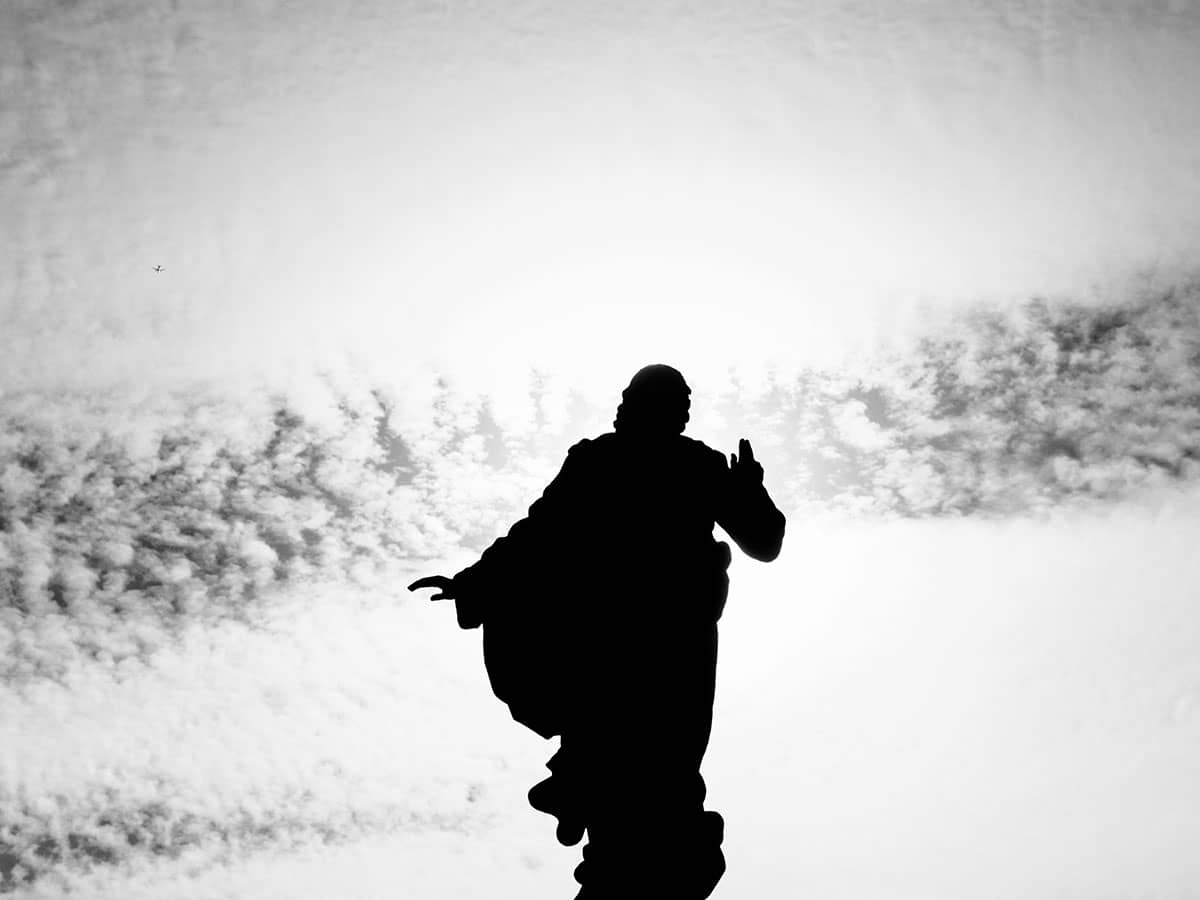 5 Reasons We Know Jesus is Returning
There is hope in Jesus’ final return. Read next feature >
Wesley Baines is a graduate student at Regent University's School of Divinity, and a freelance writer working in the fields of spirituality, self-help, and religion. He is also a former editor at Beliefnet.com. You can catch more of his work at www.wesleybaines.com.