7 Lies We Believe About God

These falsehoods keep us in the dark.

Of all the subjects in the world, the most misunderstood, perhaps, is God. We impress upon God our own human ambitions and ignorance, often making Him out to be something very different from the deity scripture actually describes.

When Christians do this, when they believe lies about God, they cannot present Him accurately to the rest of the world. Instead, the world gets a muddied image of God that repels them.

And just as badly, Christians, themselves, suffer for these misbeliefs. The idea that God doesn’t like you, that He’s ashamed of your humanity, or that He supports your individual causes can be incredibly destructive.

The truth, though, as John 8:32 says, will set you free. When we look to scripture to build a mental image of the God we serve, rather than relying on our own preconceived notions and wishes, we come as close to truth as is humanly possible.

Sometimes the truth about God is difficult, but there’s always a hidden joy behind it—God is for us, loves us, and His character is goodness, itself. To help you discover what this means, let’s take a look at 7 lies we believe about God, and dismantle each so that you can truly be free.

God is of My Denomination

God is of My Denomination

So many of us feel that we own the truth. We simply take for granted that this or that denominational interpretation of the Bible—and subsequently, the character of God—is the “right” one. Because of this, we assume that God is firmly in our denomination of the Christian Church.

This couldn’t be more wrong.

While the fracturing of the Church into denominations isn’t necessarily a bad thing, it can build walls between Christians when people believe that God is confined to their own group. It is this attitude, not the existence of denominations, that truly fractures the Church.

In reality, God doesn’t belong to any denomination. He isn’t Baptist. He isn’t Methodist or Presbyterian or Catholic. He’s not even Calvinist or Arminian. He is God. He is above these man-made structures.

2 John: 9 reads, “Everyone who goes on ahead and does not abide in the teaching of Christ, does not have God. Whoever abides in the teaching has both the Father and the Son.” So whatever flavor a church’s doctrine is, as long as that church embraces the essentials of Christ’s teachings, God is happy with it.

God is not confined by our denominations—He is far too big for that.

God is a Prude

God is a Prude

Oh, boy—this one is going to be tough for many readers, but bear with it.

God is not a prude. He’s a realist. Let’s unpack what this means.

Many Christians view sex as something dirty—and by extension, they view their own human biological wants and urges as sinful and disgusting.

But the truth is this: God built us to be able to have sex. We’re made for it—both for reproduction, and for pleasure. Even the much-maligned Puritans knew this, and embraced a wide range of sexuality within the context of marriage.

That last bit is the key here—within marriage. See, God isn’t some frowning headmaster who yells at us when He catches us making out in the corner. He’s a concerned Father who knows that if we cheat on our spouses or create a baby outside of marriage, we’re only hurting ourselves. He has our best interests in mind, not our suppression.

So, no—your sexuality is not dirty. It’s not gross or taboo. And within the right context, it’s not sinful. God certainly doesn’t look down upon you for it—He is the creator of sex, after all. Just take a look at Song of Solomon if you have any doubts.

That's hardly the work of a prude.

This lie is heartbreaking. It is a weight that bends the backs of so many Christians, and repels unbelievers from the faith like nothing else.

But hear this: God does not hate you. In fact, He loves you. No matter what.

In Ezekiel 18:23, God says something incredibly important: “Have I any pleasure in the death of the wicked, declares the Lord GOD, and not rather that he should turn from his way and live?”

And then there is the famous John 3:16. Pay attention to the first six words—“For God so loved the world.” The entire world. Everyone. God does not only love, He is love. In our closest, most intimately loving moments with the people we hold dearest, we catch but a dim glimmer of what God is.

God loves you, in all of your flaws and broken humanity. Don’t let anyone convince you otherwise.

God is in My Political Party

God is in My Political Party

This lie becomes particularly virulent around election time, and it is one that can destroy relationships and burn bridges. A few Christians find themselves believing that God supports their political party, whatever that party may be.

But this isn’t true—spiritual concerns are not the same as political concerns, and so no one can claim that God is “with” their particular party. Rather, all Christians are of the same “party”—those who follow the teachings of Christ and the edicts of God.

God does not endorse or condemn societal constructs such as capitalism, economics, socialism, liberalism, or conservatism, but He does call on us to make intelligent, scripturally-based choices about how we act when engaging with these systems. We are to love others as we love ourselves. We are to aid the poor. We are to preserve our environment. We are to protect life. There are elements of these scriptural ideas in both of our main political parties—neither holds the upper hand, and both have their problems.

In the end, though, when we believe the lie that God is with a particular party, we begin to blindly follow that party, treating it as God. And that is a mistake.

Instead, we should make the choice of which party to support based upon scripture. It’s hard, but it’s the only way to dispel this particular lie.

There’s no getting around it—this is going to sound sacrilegious.

God is not religious.

That’s right. Take a breath, let that sink in, and realize that there’s more to this than you think.

The Pharisees were religious. In fact, they were the religious elite—the teachers and leaders of Christ’s day. But all of their convoluted, manmade doctrine failed in the face of Christ’s teachings.

Here’s what Jesus had to say to them.

“They pile heavy burdens on people’s shoulders and won’t lift a finger to help. Everything they do is just to show off in front of others. They even make a big show of wearing Scripture verses on their foreheads and arms, and they wear big tassels for everyone to see. They love the best seats at banquets and the front seats in the meeting places. And when they are in the market, they like to have people greet them as their teachers.”

These Pharisees—and many of our religious leaders today—fail because they think that they can work their way into God’s graces by adhering to laws that they, rather than God, created.

Is it in the first that you’ll find true Christianity.

This is an incredibly contentious issue in the church, and a major front in the war between sacred and secular communities. This is one of those areas, though, where the secular community gets it right far more often than the Church does.

God does not think less of women, nor did He place woman lower than man. The mistreatment of women is a result of the fall.

This lie begins, for most people, in Genesis 3:16, when God tells Eve, after the fall, that …”you will desire to control your husband, but he will rule over you."

Many read these words as a commandment for women to submit to the greater authority of men, but this isn’t the case. This line, spoken by God, isn’t a curse.

God didn’t force woman into subordination. He simply warned that, because humankind chose its own rulership over that of God, things weren’t going to work right. People were going to subordinate people, in spite of God’s will, not because of it.

The original Hebrew word for “helper” as it is applied to women in Genesis 2: 18 is also applied to God when He assists the Israelites, and to neighboring armies giving aid to those in need. It doesn’t imply subordination—quite the opposite, in fact.

Pulled from Adam’s rib, woman is made of the same stuff as is man and is equal in the eyes of God. Of that, there can be no doubt.

God Does Not Exist

God Does Not Exist

This lie is usually the accumulated result of all the other lies on this list. If you try to follow a God made of falsehoods, one who hates you, who demeans you, and who supports certain groups of Christians and not others, your faith isn’t going to work out. God is just going to feel wrong, and many people translate that “wrong” into “doesn’t exist”.

But if you can find your way back home from this belief by just looking around you. Consider life, itself—the trees, animals, and the very atmosphere and earth that support it all. Is this chance? Was it by accident that the Earth is located on a peaceful arm of the Milky Way, safe from the horrors of black holes and planetary collisions?

The chances of life forming as it has, all on its own, are incredibly low—all signs point toward an intelligent designer.

That designer is God.

So if you find yourself doubting, caught in the web of lies we tell ourselves about God, just open your eyes. You’ll find Him soon enough.

When we figure out who God really is, we’re better able to not only be His representatives to the rest of the world, but our own spiritual lives are healthier. Examine your own preconceived notions and ideals for these falsehoods, and weed out what’s not truly scriptural.

Do this, and you’ll find God. 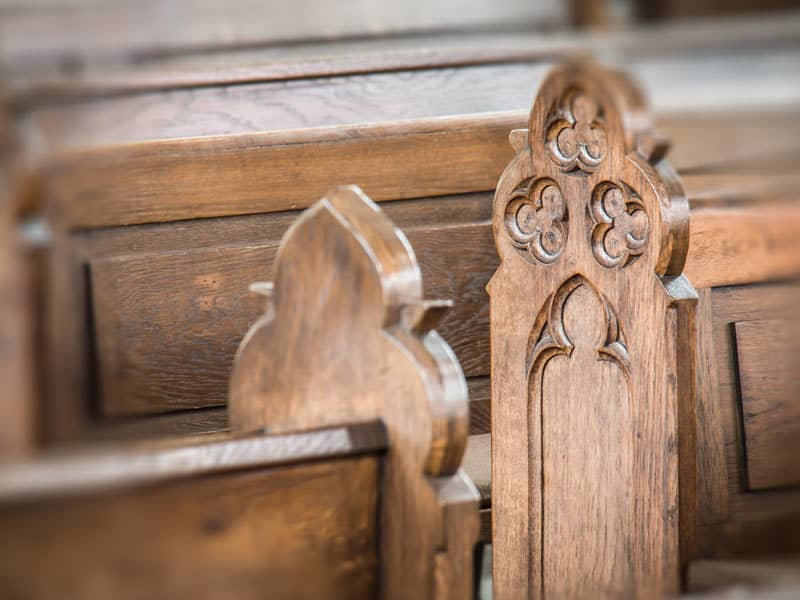 6 Lies About the Christian Church
These common lies keep people from going to church and participating in it. Read next feature >
Wesley Baines is a graduate student at Regent University's School of Divinity, and a freelance writer working in the fields of spirituality, self-help, and religion. He is also a former editor at Beliefnet.com. You can catch more of his work at www.wesleybaines.com.