6 Important Biblical Figures Who Are Never Given Names

History forgot their names, but it will never forget what they did.

By Stephanie Hertzenberg stephanie hertzenberg
Shutterstock.com
There are quite literally hundreds of names in the Bible, and the number only increases if a person counts the multiple Sauls, Azariahs and Josephs. There are long lists of genealogies that record dozens of generations and repeated references to the many children of various kings and priests. A person can open the Bible at random to almost any page in the book and find at least one name that was used by a modern friend and two names that are tongue twisters to a person used to speaking English. Ironically, however, the names of some very important and influential people were never recorded in the Bible.
Many people are referenced by identifiers in the Bible. They are “a Canaanite man” or “a Samaritan woman” instead of their proper name. While this is perfectly understandable for minor characters who played a small role in the overall biblical story, it is surprising to learn which names are left out of the Bible’s pages. Some of the people left unnamed did much of their work in the background, or their importance was not realized until later, but others were the reason for massive events that reverberated throughout biblical history. Here are six important biblical figures who are never mentioned by their name.

Most people are aware that Christ was not alone when He died on the cross. According to the Bible, there were two other men who were crucified with Him on Golgotha. One of the two criminals sneered at Jesus. As the three of them hung there in agony he demanded, “Aren’t you the Messiah? Save Yourself and us!” The other man, however, rebuked the first criminal. “Do you not fear God,” he asked, “since you are under the same sentence?” The unnamed man continued by recognizing that both he and the other criminal were suffering the lawful punishment for the crimes they had committed, but Jesus had done nothing wrong. Instead of raging at Christ, the believing thief begged Him, “Remember me when You come into Your kingdom.” Jesus told the thief, “Truly I tell you, today you will be with Me in paradise.” In Luke, the lowly thief was the last human being Jesus spoke to before His death and the final person to be saved by Christ in His human form.

It is strange what names are remembered and which names are forgotten in the Bible. The New Testament records the names of a number of beggars, thieves and unfortunate souls that Jesus saves, but the name of the woman responsible for the survival of the Israelite people is forgotten.
When Moses is sent floating down the Nile, he is saved by Pharaoh’s daughter. This Egyptian woman is the offspring of the man who has order the murder of an unknown number of innocent babies, yet she is the reason the Israelite people survived. Without her, Moses would likely have died in the Nile or been raised outside of the protection of Pharaoh’s household. Without Moses, it is unclear if or when the Israelite people would have managed to escape their chains. There is also no way of knowing how many Israelites would have perished before they reached their freedom. Moses may be the center of the story in Exodus, but it is unfortunate that history has forgotten the name of the woman who made it all possible.

One of the most well-known stories in the New Testament is the tale of a woman who is brought before Jesus and accused of adultery. Jesus is questioned by the Pharisees about what to do with the woman who “was caught in the act of adultery.” The Pharisees go on to point out that “in the Law Moses commanded [the Israelites] to stone such women,” and the Pharisees ask Jesus what He thinks they should do. The question, like many of the inquiries directed as Jesus, was a trap “in order to have a basis for accusing Him.” Christ, however, gave one of His most famous responses of all. “Let the one among you who is without sin be the first to cast a stone.” No one can bring themselves to throw any stones, and Jesus is left alone with the woman whom He forgives. For all its fame, the actual importance of the tale is somewhat lost in the New Testament. When dealing with the adulteress, Jesus does not argue whether the Law was right or wrong. Instead, He forced the Pharisees to examine themselves and consider if they had any right to condemn another. In this episode, Jesus firmly moves his teachings away from the reciprocal style of justice found in the Old Testament and into the mercy that fills the New Testament.

The Book of Exodus opens with the short tale of the rise of the enemy of the Israelites, Pharaoh. Pharaoh rose to power after the death of Joseph and his brothers, and this new ruler “did not know Joseph” and how the Israelite saved the people of Egypt. As such, Pharaoh has no compunctions about “put[ting] slave masters over [the Israelites] to oppress them with forced labor…[and ordered] all [Pharaoh’s] people [to throw] every Hebrew boy that is born into the Nile, but let every girl live.” Pharaoh orders the death of the innocent, enslaves and oppresses the Israelites, refuses to let them leave and eventually pursues them with his armies into the Red Sea. He is the enemy of the Israelites, and both Egypt and the title of pharaoh are associated with enmity throughout the Old Testament. There is, however, no mention of this Egyptian king’s name. He is reduced simply to his title despite being the catalyst for the rest of the biblical story.

The Magi are the three kings who travel to worship Jesus when He is born. They crossed great distances to find Him and show Him the honor He deserved. In doing so, they met Herod who was immediately fearful of Christ and wanted Him destroyed. This led to the Slaughter of the Innocents and the flight of Jesus, Mary and Joseph to Egypt. Had the Magi not gone seeking Jesus, Herod might not have found out about Christ until He was older. The Magi, of course, meant no harm and avoided Herod on their way out of Bethlehem so that they would not lead Herod’s men to Jesus.
The Magi were likely not actually kings. Instead, they would have been ancient astronomers and mathematicians who noticed unusual events in the skies. They were among the first to meet Jesus, and they were both foreigners and scientists. From the very beginning, Jesus was Lord of all nations. He was sent to the Jews, but when He came to Earth, even those who did not know the prophecies of the Old Testament or had heard of the Messiah knew that something extraordinary had happened. The three unnamed Magi were an early clue that the gentiles would find their way into Christ’s grace.

Everyone today knows that Christ spoke to and saved both Jews and gentiles when He walked the earth. What some people forget, however, is that He originally preached only to the Jews. It was not until later that He began reaching out to the gentiles as well. One of the first times He did so is described in Matthew 15. A Canaanite woman begged Jesus to save her daughter from demons. Jesus, however, refused and told her that He “was only sent to the lost sheep of Israel” and that it was “not right to take the children’s bread and toss it to the dogs.” The Canaanite woman, however, was not deterred. She agreed with Christ but pointed out that “even the dogs eat the crumbs that fall from their master’s table.” The tale ends with Jesus commending the woman’s faith and healing her daughter.
The story of the faithful Canaanite woman often gets overlooked as simply another miracle story, but it actually has a much deeper meaning. The Canaanite woman is the first gentile to truly believe. It is through her that the process of converting the gentiles is begun, and it is with her that Christ first truly begins to reach out to non-Jews.
Shutterstock.com

The Bible is overflowing with names, but some of the most important people in the biblical story are left unnamed. They may be background characters who symbolize something that would become important later, such as the faithful Canaanite woman whose faith led to the conversion of the gentiles, but the Bible also leaves unnamed those people who determined the entire course of history. In such instances, the lack of a name is unfortunate. Undoubtedly people would like to know the name of the Egyptian woman who saved Moses or the thief who dared to believe. 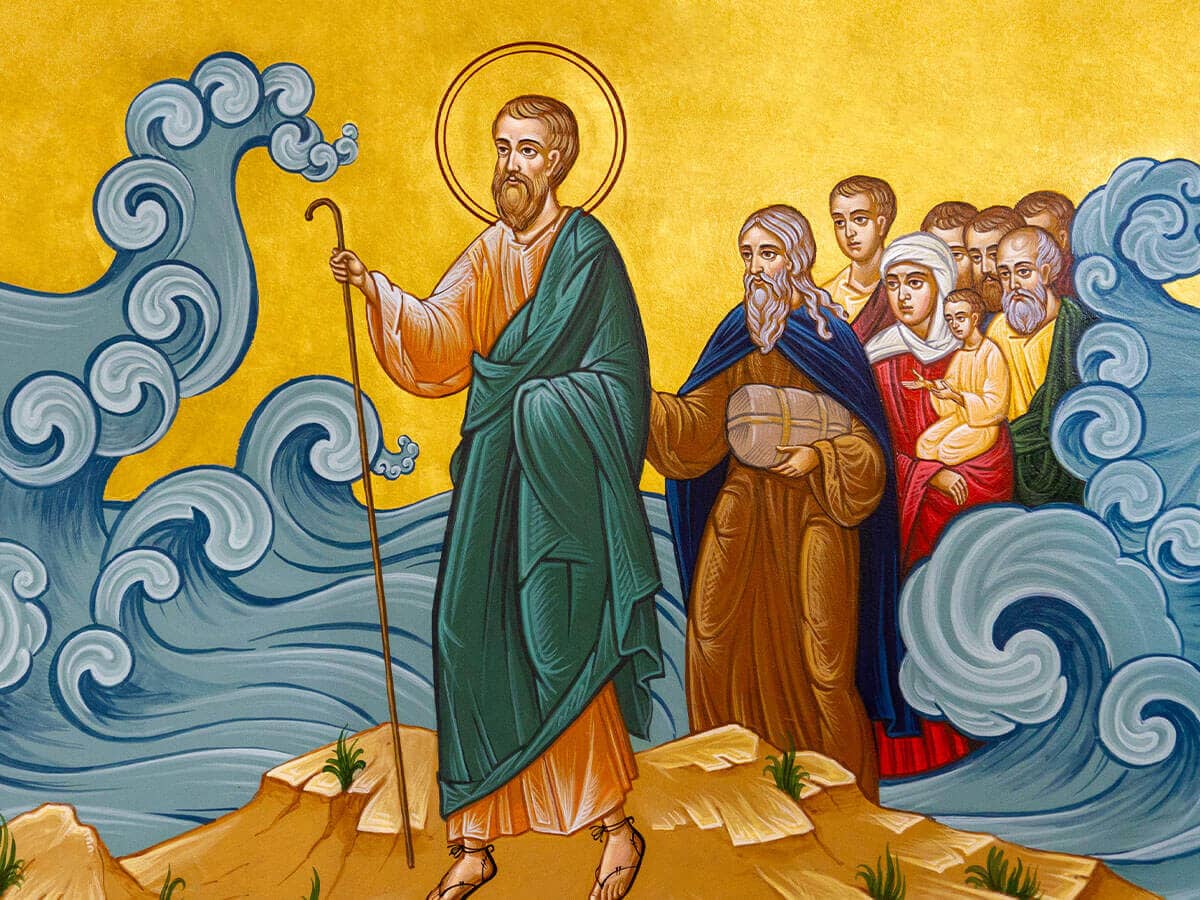 Is There Proof the Exodus Took Place?
Historians and theologians may never agree. Read next feature >
Stephanie Hertzenberg is a former writer and editor at Beliefnet. She is a graduate of the College of William and Mary where she majored in Religious Studies and minored in Creative Writing. She maintains an avid interest in health, history and science.