6 Details Everyone Leaves Out of Popular Bible Stories

The Bible’s best stories have some interesting deleted scenes.

By Stephanie Hertzenberg stephanie hertzenberg
Shutterstock.com
One of the best parts of buying a movie on DVD or Blue-ray is all the little extras that come with the disk. There are usually behind the scenes glimpses of how the movie was made, director comments and, best of all, deleted scenes. The moments that were cut from the film are always interesting to see. Often the scenes that were removed change little about the film and were cut for pacing reasons. Sometimes, however, those deleted scenes irrevocably alter how you view certain characters, key events in the film or even the overall movie itself.
Some of the most commonly told Bible stories have their own versions of deleted scenes. These are the little moments that are rarely shared from the preacher’s pulpit or included in film, book or theater adaptations of the story. In fact, many people are so used to hearing the stories without those missing moments that the reincorporation of those deleted scenes can leave a familiar Bible story looking like a completely different tale. Here are six details everyone leaves out of popular Bible stories.

For most people, the story of Noah’s Ark is so well-known that they do not even bother to refer to the Bible when they retell it. The world was wicked so God sent a flood to drown everyone except for Noah, his family and the animals Noah placed on his ark. What most people forget, and the vast majority of preachers carefully ignore, is the first few verses of the story of Noah. Genesis 6:1-4 speaks of the Nephilim, a race of beings born “when the sons of God went to the daughters of humans and had children by them.” These beings would become “the heroes of old, men of renown.”
This first section of Noah’s Ark is often skipped over for a variety of reasons, but one of the biggest reasons will be obvious to anyone familiar with Greek and Roman mythology. The Nephilim are the children of gods and humans who become heroes. This could be lifted straight from almost any myth in Ovid’s “Metamorphoses.”

The story of Joseph, son of Israel, was always a popular tale, but it exploded in popularity following the success of Andrew Lloyd Webber’s musical, “Joseph and the Amazing Technicolor Dream Coat.” The original story lacks the catchy tunes from the play, but it still remains one of many people’s favorite Bible stories.
When most people, Webber included, retell Joseph’s story, they skip over the side story planted smack in the middle of the tale. Just after the Bible tells of how Joseph was betrayed by his brothers and sold into slavery, the story diverges into the story of Judah and Tamar. Tamar was Judah’s daughter-in-law, but two of Judah’s sons died after marrying her. Concerned for his final son, Judah ignored the laws of the time and refused to marry Tamar to his youngest son. Tamar, however, got the best of Judah. Since he would not marry his son to her, the law declared he had to marry her himself. Judah had no intention of doing so, but Tamar tricked him into it. In doing so, she might well have saved Judah’s life given that God was none too pleased with the man or his family at the moment.

The Old Testament has a number of stories that have clear antagonists who are set on destroying or enslaving the Israelites. Many of them are the commanders of invading armies or the kings of enemy nations. None, however, stand out quite as well in the popular imagination as the villain of Exodus, Pharaoh.
The story of Moses and the Exodus is well known and was adapted into the popular animated movie “The Prince of Egypt.” What most people seem to leave out of the story is that Pharaoh was not simply blinded by pride or anger when he refused to let the Israelites go. Instead, God repeatedly “hardened Pharaoh’s heart” so that the Egyptian would continue to reject Moses and Aaron’s entreaties. The purpose of this seemingly self-defeating maneuver was to allow God to really show off His powers and impress them upon the Israelites. It is hard not to feel rather sorry for all the innocents who got caught in the crossfire.

Drunk After the Flood

Drunk After the Flood

Most people finish the story of Noah’s Ark with the dove bringing Noah the olive branch, the animals disembarking or God creating the rainbow as a sign that He will not drown the world in such a flood again. The vast majority of people do not include Noah’s rather embarrassing moment after the flood receded.
After the flood was over, the animals had scattered across the earth once more and God had created the rainbow, Noah planted a vineyard. As a farmer, it makes sense that Noah would begin cultivating the now-empty earth. He apparently did his job a little too well. After making wine from his harvest, Noah “became drunk and lay uncovered inside his tent.” To the misfortune of both his son, Ham, and Noah’s pride, Ham happened to walk in and see his father drunk, passed out and naked. Not quite the same inspiring ending as a rainbow or dove with an olive branch.

Joseph Shall Not Rule

Joseph Shall Not Rule

Given that Joseph is the main character of his story, most people assume that when Israel saw the future of each of his sons’ family lines, Joseph would be the son that came out on top. After all, the man had already risen as high as it was possible to rise in a foreign country despite starting out as a slave. He was a natural choice for a leader given that he had quite a bit of practice at it after helping save Egypt from the famine. Also, given that righteous main characters in Bible stories tend to show up in Christ’s family tree, most people assume that Joseph was the distant grandfather of David and thus Jesus. In the Bible, however, it is stated that Jesus, David and all the kings of Israel descended from Judah, the same brother who had to be tricked into doing the right thing. On his deathbed, Israel stated that “the scepter will not depart from Judah, nor the ruler’s staff from between his feet, until He to whom it belongs shall come and the obedience of the nations shall be His.” Although Judah won the lottery of futures, Joseph’s line still had good things to look forward to as they would be “a fruitful vine near a spring…with the blessings of the skies above…the deep springs below...[and] of the breast and womb.”

Unlike Noah’s Ark or the tale of Joseph, the story of Job is not one that is often told as a bedtime story. The book follows Job, a righteous man. Normally, this title means that the person in the story is going to have God protecting them from tragedy. Instead, everything that can go wrong for Job goes wrong. He loses his family, his home and his health. The story is unusual, which makes it a source of fascination and consternation for both biblical scholars and clergy members alike, but when the tale is recounted, there are still details that people tend to skip over.
Most Christians are unaware that the Bible actually contains one of the most classic mythological creatures in the West, the unicorn. Job 39:9-12 shows God asking whether “the unicorn will consent to serve [Job]…[and] stay by [his] manger at night.” There is, admittedly, debate over whether the word “unicorn” is the right translation for the Hebrew re’em, but it does lead to some admittedly interesting visuals.
Job 41 describes the infamous Leviathan. A fearsome dragon straight out of a fairy tale, it has “strength and [a] graceful form” that is covered in a “double coat of armor.” It has a mouth “ringed about with fearsome teeth…its snorting throws out flashes of light…flames shoot from its mouth…[and] smoke pours from its nostrils.” Not a creature anyone is hoping made it onto Noah’s Ark.
Shutterstock.com

It is odd sometimes to think that the stories you think you know best may actually be the stories that you do not really know at all. There are so many little moments left out of some of the most commonly told Bible stories that some of them end up looking like totally different tales when those missing scenes are added back in. Honorable people make bad choices, villains have redeeming qualities and the stories turn from perfect black and white morality lessons to an honest look at the messiness of the world. Many of those commonly ignored details add humanity back into the stories and remind readers that the Bible does not talk about fictional characters. It details the difficult choices made by the very real people that God loved despite their many flaws. 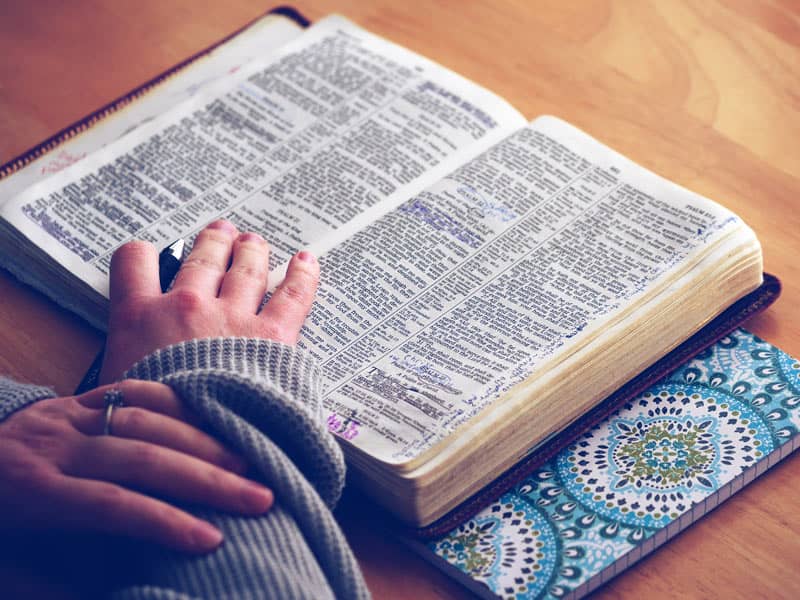 What Book of the Bible Should I Read?
The Bible can be overwhelming to even the most seasoned readers, here are some suggestions to begin your study. Read next feature >
Stephanie Hertzenberg is a writer and editor at Beliefnet. She is a graduate of the College of William and Mary where she majored in Religious Studies and minored in Creative Writing. She maintains an avid interest in health, history and science.