While visiting ruins in Israel, my guide and I discovered a new dig. We didn't know what it was--but we videotaped it.

Beliefnet
The key to archaeological discovery, they say, is a lot of research, hard work, and luck—being in the right place at the right time. And though it was by sheer dumb luck that I stumbled onto Herod the Great's tomb at Herodium in the West Bank three weeks ago, it was more a matter of being in the wrong place at the right time. I say the wrong place, because my guide, Brian Schultz, and I had to duck under tape that closed off the excavation site to the public. But we were there at the right time, because it was a Saturday afternoon, the Sabbath, and except for a few Israeli soldiers observing the West Bank from the top of a fort above us, we were the only souls there. And we had a video camera. It was April 14, and archaeologists at the site had not yet announced the discovery of the tomb of the first-century king who, according to the New Testament, tried to have the infant Jesus killed. But as the ancient stone structure that the archaeologists had unearthed came into our view, we realized we were seeing architectural features that no one for hundreds or perhaps a thousand or more years knew existed. So we started videotaping everything we saw.

I was in the country to research a book I’m writing about daily life in the time of Jesus, and I'd hired Brian, a biblical scholar, to show me as many first-century sites as possible. High on my wish list of places to visit was the Herodion, King Herod's monumental palace complex some eight miles south of Jerusalem in the Judean wilderness. 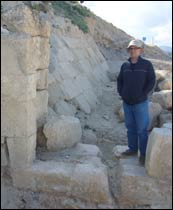 Not only was the Herodion the last in a series of lavish palace-fortresses Herod built, but it's also where the first-century Jewish historian Josephus tells us Herod was buried. Josephus describes an elaborate funeral: the ruler's body, wrapped in crimson, was carried 24 miles to the Herodion in a huge procession led by his surviving sons and followed by his army--plus 500 slaves and freedman bearing spices. Until now, many scholars had speculated that Herod was buried somewhere in the lower palace area of the site.

The day Brian and I visited the Herodion was sunny and windy. From the top of the fortress, we could see the Mount of Olives at Jerusalem and the Dead Sea. On the hilltop, we explored the ruins of Herod's lavish palace: plastered and frescoed walls, a colonnaded court, a Roman dining room, and a bathhouse. Then we explored the vast cisterns and tunnels carved into limestone bedrock beneath the great fortress. We followed the tunnels out to an exit partway up the hill.

That’s when we noticed, off to the right, the Israeli Antiquity Authorities’ tape marking a new excavation. Brian said that it must have been a very recent dig, because it hadn't been there the last time he visited. We ducked under the tape and climbed the hill till we reached the dig. Here, where before there had just been grass and rock, they’d unearthed a smooth, stone wall—what appeared to be a glacis--a smooth, sloped wall intended to make it difficult for an enemy to climb or to attack. We also found an ancient doorway of some kind, with a stone threshold and doorpost.

We found another excavation level just below us. Here was a terrace wall made of unhewn fieldstone set on bedrock. I didn't know it at the time, but I was standing directly above the site where we now know the feared king was buried. The pictures of the dig released after the find was announced make it clear—the glacis-like wall is just above King Herod’s tomb. Archaeologists probably dug further down just a few days after we left, making the historic discovery.

Now the news has broken: Professor Ehud Netzer of the Hebrew University of Jerusalem told the world he had found Herod's tomb. King Herod, of course, figures prominently as a villain in the Christian tradition. His title, given to him by Rome, was "King of the Jews"—so he understandably would see a Jewish Messiah as competition. According to the Gospel of Matthew, Herod ordered the deaths of all young boys in Bethlehem, after the Magi told him that the next King of the Jews would be found there. An angel warned Jesus’ parents of Herod’s plan to kill all potential newborn rivals, and they fled to Egypt, where they waited until Herod died before they returned to the Holy Land.

Scholars have questioned the so-called “massacre of the innocents”—there’s no historical or archaeological evidence outside the gospels to support it—but Herod was certainly capable of great brutality toward anyone he perceived to be a threat. He even murdered one of his wives and two of his sons, causing the emperor Augustus to remark that it was preferable to be Herod’s pig than his son.

So disliked was Herod, Josephus writes, that as he lay dying he ordered the arrest of several prominent Judeans and instructed his sister, Salome, to have them executed upon his death so that there would be mourning even if “on other people’s account.”

History couldn’t create a more unlikely pair—the iron-fisted tyrant and the humble peasant who turned the other cheek. And it struck me that, though Jesus didn't build a mausoleum for himself—a Jesusion, if you will—he left by far the greater legacy.