When the Finger Points to Us

Simon of Cyrene didn't want to pick up Jesus' cross. He was forced to. In doing so, his entire life changed.

We have a dark human curiosity about calamities that are not our own, an odd concurrence of danger and safety. On the one hand, this terrible event could, under other circumstances, just as easily have happened to us or to someone we love, and we are both compelled and excited by the notion that such danger lurks around us. On the other hand, because it didn't happen to us, but to someone else, we maintain a certain distance from the event, a filtered truth. We feel the risk, and imagine the pain, but only vicariously and from the protection of a Jerusalem sideline, a police barricade, or the dry side of a fire truck.

One of the men in that procession, beaten and scourged, could no longer walk, and collapsed on the road. The fact that he happened to do so in front of Simon would change Simon from an observer to a reluctant participant, move him from sideline to center stage. And just as our experiences alter our lives-and the more dramatic the experience, the more the dramatic the alteration- this experience may well have changed Simon's life profoundly, for in it he found a truth he did not even come to Jerusalem to look for.

The Last Mile
There was no one else left to help Jesus now. Not long before their entry into Jerusalem, his disciples had heard him say to them, "If any man would come after me, let him deny himself and take up his cross and follow me. For whoever would save his life will lose it, and whoever loses his life for my sake will find it" (Matt. 16:24-25). No doubt they listened to him in rapt attention, nodded their agreement, and looked at each other with the kind of knowing expression that silently says, "Yes, of course, when the time comes, we will do this for him; we will take up the cross." But theirs was the filtered truth of the spectator. By the time that cross was strapped to his back, they had all left. As Matthew records later, shortly after Jesus was arrested, "all the disciples forsook him and fled" (26:56). Each one chose to save his own life, rather than risk losing it for Jesus' sake, and succumbed to what editor George Appleton called "the cowardice that dare not face new truths." And so the task of bearing the cross fell to a complete stranger. It is easy to misinterpret the events of this last mile as a kindness either on the part of the Roman soldier, who relieved Jesus of his burden, or of Simon, who bore it. In fact, there was no benevolence on either part.

The soldier, as was custom, needed only to make certain Jesus would still be alive when the cross was lifted at Calvary. As a deterrent to other would-be criminals, the authorities wanted prisoners to suffer the agony-slow asphyxiation-that is peculiar to crucifixion. And because Jesus' body had been so compromised by his beating, this agony was not a sure thing. Weighing the risk, the soldier pointed to Simon and ordered him to help.

That Simon was compelled is important, because it implies he would not have acted of his own accord, and I suspect this is right. To have stepped forward voluntarily would have been the firstcentury equivalent of stopping at the scene of the car crash or racing into the burning building; it is a rare hero who puts himself or herself in harm's way for the sake of a stranger. What Simon did was not heroic; he had no choice.

But that doesn't mean he wasn't deeply moved by what he did, for in this too he was only human. The filter that separated his opinion from Jesus' reality was-if only faintly and for a short time- lifted, and he saw, no longer obliquely but starkly, what this man was being ordered to endure. When the crosspiece was put on his shoulders, he did not imagine the weight, he felt it. And with it he felt the sweat and blood that had seeped from Jesus' body to warm the wood. He felt the splinters and shards digging into his shoulders. He felt tightness in his arms and his neck as the rigidity of the wood constrained them. He felt his legs buckle and quaver. And perhaps more than any of this, he felt the stares of the spectators, felt both their dark curiosity and their removal from what he and the criminals were now enduring. The vast majority of that crowd was there to witness not a tragedy over which they would later weep, but an event they would recall at dinner that night, and Simon felt this too.

But for him it would become something else entirely. When he reached Calvary and the burden was lifted from his shoulders, he must have been amazed at how unburdened he felt. How grateful he was to be a free man. He was the same man that he was when he awoke that morning. He had no more money and no fewer cares, had not made any new friends or lost any old ones; but something had changed, "as a room has changed," wrote a poet, "when someone new has entered it."

The taste of death had given him a deepened appreciation for life, and the weight of the cross that was taken from him had given him a deepened sense of compassion for the one who would now be nailed to it. When in a few moments those crosses were hoisted, Simon saw it all through new eyes, no longer the eyes of a spectator but the eyes of a participant. He tasted the agony of the other, in small dose, and he would not forget it. Like the scrap of bread that is the body broken and the sip of wine that is the blood poured out, it was his communion, his small taste of the larger reality. Not enough to consume or sate him, but enough to know what one human being is enduring for the sake of others.

Simon was the lucky one for having been chosen, not the disciples who fled for their lives. He was lucky because of what he had learned by what he had experienced. What those disciples never fully appreciated was that when Jesus challenged them to take up the cross, he was offering them a gift. Had they stayed, and carried it for him, they would have been the ones so much closer to him, so much closer to his pain, and therefore his love. But they chose safety over courage, as most of us would have, as I would have, as Simon would have. And so we would never know. Simon knew, but only because he was forced to know.

When the Finger Points Not to Simon but to Us
We are defined by many things, including both the burdens we choose and the burdens that choose us. A child is born with severe autism, and the condition changes her family into something they never intended to become; they must make great accommodations in their lives but also in their dreams and expectations, and perhaps even in their theology. A young man-in many ways a boy, really-is conscripted into military service and returns from the battlefield minus a leg or an arm, and he must not only learn new ways of doing things but unlearn old ones, as must those who love him. There's too much rain at planting time, or too little, or a seedling blight gets the better of the crops, and a farm five generations in the same family is lost to foreclosure. The family is left to figure out how to do without something each one of them was born into, and why it is that the prayers they offered up every Sunday at the little prairie church have gone unanswered.

We don't know when the finger will point our way, and when it does, there is no purpose in asking why, because to ask is to assume there is some sort of ethereal logic behind who suffers and who does not. God did not place Simon at that spot at the roadside, any more than he inflicts a child with a congenital disorder, runs a bullet through a soldier's limb, or invites a plague upon a family's livelihood. No, the question we must ask is not why the cross is lashed to our shoulders, but what we will do with it. What will we see that we would not have otherwise seen? What filter will be removed that will allow us to replace an opinion with a truth?

I once had a patient by the name of Stephen, a perceptive and very successful businessman with a wonderful wife and a loving young son. Stephen was experiencing bouts of depression, and at some point our work turned toward his relationship with his own parents and the kind of upbringing he had had.

Stephen's parents were materially generous but emotionally stingy people; they gave him, in his words, "everything I could ever want-except, of course, time and affection." The dynamics that were at work here are not important here; what is important is the revelation Stephen had after parsing much of this out. "I can't change the way I was raised," he told me, "but what I can do is take a good hard look at it and make sure that I don't make those same mistakes with my son." And then, after a brief, reflective pause, he added, "I honestly don't know that I would be so aware of the need to show my boy how much I love him-to really show it, not expect him to assume it-if it hadn't been absent in my own childhood."

What Stephen was talking about was bearing the cross of an unhappy experience but then using it, perhaps the way Simon did, to see a reality he might otherwise have missed. Just as Simon could gain some small glimpse of the agony of another man, Stephen could gain a sense of what it would mean to his son to go through his childhood unsure of his parents' love for him. He took something long relegated to his past, dead and gone, and gave it new life to the end that it might bear fruit for the benefit of others. 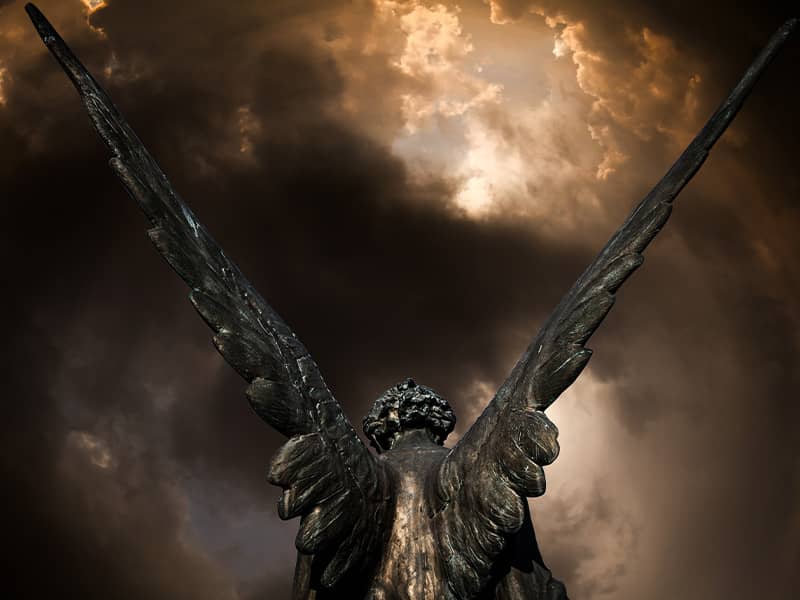 5 Warning Signs From the Angels