When the disciple John took Mary into his home, he accepted a burden as well as a gift. His example can inspire caretakers today

Beliefnet
My mother lives far from me. It's about a thirteen-hour drive to get there. She is in pain frequently now, though she brushes it off; her thinking gets confused, though she is always cheerful, in the wry and whimsical way I remember from childhood. I hear her faint voice on the phone, but she usually says she can't hear me. I rely on my sisters, who live closer, to manage most of her daily needs. Excellent doctors, pharmacists, and in-home caregivers help to make long-distance parental care possible, if not quite perfect.

Care of elderly parents has been a burden throughout human history. From an aspect of cold calculation, elder neglect or abuse is a sensible crime. Little children are demanding, non-productive, and soil their pants, but you expect a return on your labor some day. Elderly parents are just as troublesome, but they're not going to get better. They're larger and heavier and sometimes smell just as bad. While interacting with a baby gives a mom or dad satisfaction and joy, emotions aren't as unclouded when all parties are older and care moves in the other direction. A son or daughter may feel a complex net of resentments and fears toward the parent they must now tend, wipe, and feed.

August 15 is the day we remember the death of the Virgin Mary. She must have been an old woman then, though we never picture her so; paintings and icons always show her young. But she must have been about fifty when she gathered with the Apostles on the day of the first Pentecost. After that, according to Orthodox Christian legend, she volunteered to be a traveling evangelist, and drew lots along with the others to see which nation each should go to and preach.

In her old age Mary went with St. John the Evangelist to the city of Ephesus in modern-day Turkey. This is the John who was standing with Mary at the foot of the Cross when Jesus spoke. "Woman, behold your son!" he said to her, and to John, "Behold your mother!"

"And from that hour the disciple took her to his own home" (John 19:27). This was more than just hospitality. In undertaking the duty of a son to the Virgin Mary, John assumed a burden as well as a blessing. While some cultures have permitted adult children to abandon or even end the life of an elderly parent, the Hebrew Scriptures insist that the elderly are to be treated with respect, protected, and cared for, to the very end. It takes a strong command to guarantee such care, because eruptions of frustration and disgust, and the obvious question "What am I getting out of this?," push natural inclination the other way. (The grown child, in fact, may get more out of a parent's death than his continuing life, if he calculates that lingering, ugly old age is standing in the way of an inheritance.) When John took Mary to his own home, he accepted a solemn obligation.

We don't know what her declining years were like. She may have been toothless and dim toward the end. John may have fed her soup from a spoon, settled her head on fresh pillows, turned her and changed her dressings. It is very hot in Ephesus this time of year. We can imagine a one-room stone house on a hillside, dark and still inside, yellow flowers dusting pollen outside the open window, children shouting on the hillside, a fly buzzing outside the wooden door. As one early August day succeeded another it must have become obvious that her end was very near. According to Orthodox legend, all the Apostles gathered at her bedside just before she died. 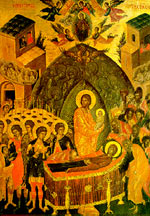 In the icon we see them standing and kneeling around her little body stretched on a bed. Her eyes are closed and her small, thin hands are crossed on her chest. The Apostles stare and weep in distress at the departure of their beloved mother. In the midst of them Christ stands within a shimmering blue halo that surrounds his whole body, holding a tiny, white-swaddled figure in his arms. It reminds us of the familiar images of youthful Mary clasping her infant child, but this time it is the Son who holds the radiant soul of his mother.

The feast of the Dormition, or as Roman Catholics call it, the Assumption, focuses on the departure of the Virgin Mary from this mortal human life. But there is another person in the story, John, who cared for her through all her last years, up till her death on that hot August day. John kneels next to her bed, tear-struck, clutching a bit of her mantle in his hands. Many of us who care for and worry about elderly parents need a patron saint to be a guiding example, to support us through hard daily toil and through even harder decisions. Holy Father John, pray to God for us.