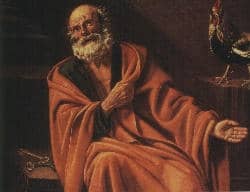 Tertullian was born into a pagan family in Carthage the year 155 AD. He studied law and rhetoric in Rome and quickly developed quite a reputation for his skills of persuasion. However, the witness of the early Christians and, in particular their martyrs, led him to consider their claims. He was converted to the Christian faith in the year 193. Most accounts indicate that he sought and received ordination to the priesthood.

He settled in Carthage where he served the Christian community faithfully for many years. Carthage became a center for what might be called today, “new age” and “alternative” philosophies and faiths. So, Tertullian turned his ample skills toward articulating and defending the Christian faith against continual challenges. The pull of those early heresies became too great even for this great thinker and apologist. Tertullian succumbed to Montanism, an errant “charismatic” movement and ended up on the extreme fringe of the movement.

Sadly, he then turned his assets against the very Church he spent years defending, all in pursuit of a “charismatic” movement which soon died out while the Church of Jesus Christ endured. No-one knows what happened to Tertullian in those later years. According to St. Jerome he lived to extreme old age. We can hope that the seed of faith planted in him - and so eloquently defended by him – drew him back to the true faith. He was one of the earliest Latin theologians and moralists. His orthodox writings were - and still are – a great asset to the Church. This persuasive apologist gathered a following in his years of succumbing to the Montanist error. Their remnant finally reconciled with the Church through the ministry of St. Augustine years later.

Many of Tertullian’s earlier writings have become a mainstay in the theological and spiritual patrimony of Christianity. One can understand why from beautiful passages like this brief excerpt from his treatise on prayer which is found in the Office of Readings for Thursday of the Third Week of lent:

From the Treatise on prayer by Tertullian, priest, The spiritual offering of prayer

“Prayer is the offering in spirit that has done away with the sacrifices of old. What good do I receive from the multiplicity of your sacrifices? asks God. I have had enough of burnt offerings of rams, and I do not want the fat of lambs and the blood of bulls and goats. Who has asked for these from your hands?

“What God has asked for we learn from the Gospel. The hour will come, he says, when true worshippers will worship the Father in spirit and in truth. God is a spirit, and so he looks for worshippers who are like himself.

“We are true worshippers and true priests. We pray in spirit, and so offer in spirit the sacrifice of prayer. Prayer is an offering that belongs to God and is acceptable to him: it is the offering he has asked for, the offering he planned as his own.

“We must dedicate this offering with our whole heart, we must fatten it on faith, tend it by truth, keep it unblemished through innocence and clean through chastity, and crown it with love. We must escort it to the altar of God in a procession of good works to the sound of psalms and hymns. Then it will gain for us all that we ask of God.

“Since God asks for prayer offered in spirit and in truth, how can he deny anything to this kind of prayer? How great is the evidence of its power, as we read and hear and believe. Of old, prayer was able to rescue from fire and beasts and hunger, even before it received its perfection from Christ. How much greater then is the power of Christian prayer. No longer does prayer bring an angel of comfort to the heart of a fiery furnace, or close up the mouths of lions, or transport to the hungry food from the fields. No longer does it remove all sense of pain by the grace it wins for others. But it gives the armour of patience to those who suffer, who feel pain, who are distressed. It strengthens the power of grace, so that faith may know what it is gaining from the Lord, and understand what it is suffering for the name of God.

“In the past prayer was able to bring down punishment, rout armies, withhold the blessing of rain. Now, however, the prayer of the just turns aside the whole anger of God, keeps vigil for its enemies, pleads for persecutors. Is it any wonder that it can call down water from heaven when it could obtain fire from heaven as well? Prayer is the one thing that can conquer God. But Christ has willed that it should work no evil, and has given it all power over good.

“It’s only art is to call back the souls of the dead from the very journey into death, to give strength to the weak, to heal the sick, to exorcise the possessed, to open prison cells, to free the innocent from their chains. Prayer cleanses from sin, drives away temptations, stamps out persecutions, comforts the fainthearted, gives new strength to the courageous, brings travelers safely home, calms the waves, confounds robbers, feeds the poor, overrules the rich, lifts up the fallen, supports those who are falling, sustains those who stand firm.

“All the angels pray. Every creature prays. Cattle and wild beasts pray and bend the knee. As they come from their barns and caves they look out to heaven and call out, lifting up their spirit in their own fashion. The birds too rise and lift themselves up to heaven: they open out their wings, instead of hands, in the form of a cross, and give voice to what seems to be a prayer.

“What more need be said on the duty of prayer? Even the Lord himself prayed. To him be honor and power forever and ever. Amen.

Bread on the Trail: St Paul wrote to the Corinthians “Be imitators of me, as I am of Christ.” (1 Cor. 11:1) In reflecting on the life of the priest Tertullian, we are called to imitate him only in his fidelity. Clearly, his insights into prayer are food for our journey as we choose to follow the Lord

Prayer: Father, today I choose to be a true worshipper. I ask in the name of your Son jesus, that you would fill me with your Holy Spirit and guide me in the learning the way of true prayer.