St. Teresa of Avila -- a heroine of Spain! 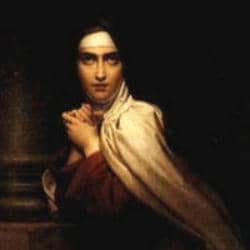 St. Teresa of Jesus (Avila), Virgin and Doctor of the Church

Her Feast day is celebrated on October 15 in the Liturgical Calendar of the Western Church. She was born in Avila, Spain, on March 28, 1515 to an influential family. Known as an affectionate and friendly child she lived what appears to have been a quite happy and normal childhood. She was attracted to living the faith very early on, with some accounts of her life indicating that young Teresa would share stories with her younger brother about the lives of the Saints and heroes of the faith. Together, they reportedly once tried to leave home to die for the faith among the Moors of Africa. Her frightened mother soon found them and they were safely returned home.

Little did anyone in Avila know that this child of Spain would later become one of the most revered Saints and heroes in the Catholic Church, and a Patroness of Spain.

In her teenage years, which are not uncommon with teenagers, her interest in the things of God seemed to wane. That was until 1531, when at the age of sixteen, she decided to enter the Carmelite Monastery in town. Her father objected. However, she was eventually professed in the Carmelite religious life in 1538.The young sisters’ life in the convent seemed uneventful, except for frequent bouts with illness.

It was after an extended illness that she began to experience great graces and breakthroughs in her life of prayer. Trained to be suspect of such consolations, she mistrusted them and submitted them to spiritual direction. This was the beginning of what was to become a lifetime of mystical grace. She writes with extraordinary honesty of her intimacy with the Lord as well as her times of travail in works of great spirituality that are classics of the Western Church.

Her Autobiography, entitled “The Way of Perfec¬tion”, and her incredible work of contemplative spirituality, “The Interior Castle” have inspired and guided millions of the faithful to a deeper life in the Lord and in his Church. They are a must reading for anyone who desires to grow in an intimate relationship with the Lord.

Teresa’s deep prayer life led her to seek a fuller expression of her religious vocation. In 1562, in the face of strong opposition and misunderstanding, she obeyed a call she sensed from the Holy Spirit to found a new convent. These “Discalced” (the word means “shoeless”) Carmelite nuns who gathered with her, sought to live a life of deeper poverty and adhere more closely to the Rule of Life of the Carmelites. The General of the Carmelite Order approved Teresa’s effort and eventually asked her to found new convents and monasteries.

However, again as is so often a part of the lives of the saints, the opposition later intensified - from within her own community. In 1575 the Order decided to dissolve the foundations she had begun. For five years she faced intense persecution, including efforts to destroy the reforms she had begun. Many of those who had joined with her, including St John of the Cross and St. Peter of Alcantara, were persecuted, imprisoned and cruelly treated.

Finally, with the help of King Philip II, the Discalced Carmelites were made an independent foundation and Teresa was able to found more new convents and monasteries. She died on October 15, 1582. Teresa of Avila was a mystic and a very practical disciple, showing that the two expressions of the Christian life can and should work together.

This vital truth is the heart of the teaching of the Second Vatican Council’s on the “Universal Call to Holiness”. The contemplative life overflows into charity and action. Teresa of Jesus was declared a Doctor of the Church by Pope Paul VI in 1970. Here is an excerpt from one of her wonderful writings:

Let us always be mindful of Christ's love

“If Christ Jesus dwells in a man as his friend and noble leader, that man can endure all things, for Christ helps and strengthens us and never abandons us. He is a true friend. And I clearly see that if we expect to please him and receive an abundance of his graces, God desires that these graces must come to us from the hands of Christ, through his most sacred humanity, in which God takes delight.

“Many, many times I have perceived this through experience. The Lord has told it to me. I have definitely seen that we must enter by this gate if we wish his Sovereign Majesty to reveal to us great and hidden mysteries. A person should desire no other path, even if he is at the summit of contemplation; on this road he walks safely. All blessings come to us through our Lord. He will teach us, for in beholding his life we find that he is the best example.

“What more do we desire from such a good friend at our side? Unlike our friends in the world, he will never abandon us when we are troubled or distressed. Blessed is the one who truly loves him and always keeps him near. Let us consider the glorious Saint Paul: it seems that no other name fell from his lips than that of Jesus, because the name of Jesus was fixed and embedded in his heart.

“Once I had come to understand this truth, I carefully considered the lives of some of the saints, the great contemplatives, and found that they took no other path: Francis, Anthony of Padua, Bernard, Catherine of Siena. A person must walk along this path in freedom, placing himself in God’s hands. If God should desire to raise us to the position of one who is an intimate and shares his secrets, we ought to accept this gladly.

“Whenever we think of Christ we should recall the love that led him to bestow on us so many graces and favors, and also the great love God showed in giving us in Christ a pledge of his love; for love calls for love in return. Let us strive to keep this always before our eyes and to rouse ourselves to love him. For if at some time the Lord should grant us the grace of impressing his love on our hearts, all will become easy for us and we shall accomplish great things quickly and without effort.”

*****
Bread on the Trail: St. Teresa of Avila was born into a wealthy family. Early on, she showed the signs of a special vocation. Her heroes were the Saints of the Church.

She told her little brother about them during their playtime.  They inspired Teresa to aspire to “greatness’ by giving herself away in love to the Lord and His Church. Even though she went through a typical lethargy in her teenage years, the seeds planted had already taken root. Her deep relationship with the Lord led to her receptivity to receiving tremendous graces from the Holy Spirit. Her prayer life only grew as she developed a spiritually disciplined life. It instilled within her the kind of courage that comes from being immersed in God. Every single one of us is able to experience these graces and, through them, do wonderful things for the Lord and His Church.

Prayer: Father, may the example, writings and prayers of St Teresa inspire a new generation of people devoted to deep and sustained prayer.  May her story of heroic virtue and discipleship be passed on to the children of this age so that they can grow up to become the great saints, mystics and heroes of the Third Christian Millennium.  Please Lord, may her witness of the consecrated life inspire women in our age to walk the path of so many who, hearing the call of Jesus, gave up something wonderful, marriage, to be married to Christ and his Church and serve as a sign of the life to come.