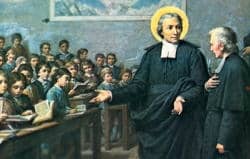 Like most Saints, Fr. John poured himself out for others, like the Savior whom he followed, Jesus Christ. Also, like the Master, he endured opposition. However, he persevered in the work because he knew that neither he - nor the work - were his own. He died in the Lord on April 7, 1719 in Rouen, France

On April 7, Catholic Christians who follow the western Church year commemorate the life of St. John Baptist de La Salle. He was born in Rheims, France on April 30, 1651 into privilege. He had wealth and all that his noble family status entailed. However, the Lord had different plans for this young man. Very early in what we now call his “pre-teen years” John decided he wanted to follow Jesus Christ.

He was tonsured at the age of eleven. This was the sign that a young man was seeking ordination. It was also considered then to be the first entrance into the clerical state. The candidate would have a lock of hair cut from his head and receive a surplice, a liturgical vestment. John was named Canon of the Cathedral of Rheims at the age of sixteen. Soon both his parents both died and he had to assume the administration of the family affairs.

This did not distract the young man from pursuing theological studies. In 1670 he entered St. Sulpice Seminary in Paris. On April 9, 1678, after receiving the Order of deacon months before, he was ordained to the holy priesthood. Two years later he received a Doctorate in Sacred theology. The Holy Spirit was truly at work in and through this young priest, calling him to what would become his special vocation, working with poor boys whom others had abandoned.

In 1679 he met a layman named Adrien Nyel who was working to educate poor boys who could not afford schooling in Rheims. Fr John became dedicated to this apostolic work, seeing it as his own calling. He began, with Adrien Nyel, to help many rough, ill mannered and barely educated boys to read and write. He witnessed the wonderful change which occurred as he taught them the Christian faith and the skills they would need to progress in life. Others began to join in the effort.

Soon, Fr. John became so consumed by his apostolic and evangelical work that he decided that his considerable wealth, inherited from his family, would accomplish much more if given to the Church and the kingdom she was called to proclaim. He gave it all away in order to accomplish this apostolate of educating young boys. He saw in each of their faces the face of Jesus Christ who had become poor for us.

Fr. John started to train teachers, realizing that this work would need many more. He established schools where these poor boys could receive the education they deserved. There were certainly many poor boys in need of help during that time in France. Very few people lived in wealth as had Fr John’s family. Most were poor, and parents were unable to send their children to school.

He was deeply moved by plight of the poor. He later wrote that they seemed "far from salvation" either in this world or the next because the children were "often left to themselves and badly brought up." Eventually he even abandoned his family home and moved in with the teachers he had trained. He renounced his position as a Canon and formed a community of men to carry on this apostolic work. They became known as the Brothers of the Christian Schools.

An amazing innovator, Fr John was always improving the teaching methods used by the brothers. As a result, his methodology revolutionized the educational system of his age. He founded a College for teachers at Rheims in 1687, another in Paris in 199, and a third in Saint- Denis in 1709. The schools which Fr John and his followers (who came to be known as “the Christian Brothers”) founded began to multiply throughout France. Paris, Avignon, Calais and many other Cities were blessed with schools. Eventually, the method and the educational apostolate of this holy priest and his followers, the Christian Brothers, spread all over the world.

His effort was not without opposition. In fact, as is often the case in Church history, much of it came from right from within the Church. Some ecclesiastical authorities resisted this new form of religious and consecrated life. The brothers who worked alongside of Fr John were laymen. They vowed to remain celibate and serve the Lord and the Church by teaching the poor. The schools they formed charged no tuition to students who could not afford to pay.
The blessing of the Lord was clearly upon the work and the schools spread. In 1695, Fr John developed a rule of life for the Christian Brothers. He also wrote a treatise addressing what they had learned in their apostolate about education. It was entitled “The Conduct of Christian Schools”. The Christian Brothers went on to become the largest teaching order in the entire Catholic Church.

Like most Saints, Fr. John poured himself out for others, like the Savior whom he followed, Jesus Christ. Also, like the Master, he endured opposition. However, he persevered in the work because he knew that neither he - nor the work - were his own. He died in the Lord on April 7, 1719 in Rouen, France. His work continues today.

St. John Baptist de La Salle’s example and wisdom has been the impetus behind training colleges for teachers, reform schools for juvenile offenders, technical and trade schools, and secondary schools for modern languages, arts, and sciences. His work literally spread around the world. In 1900 Fr. John Baptist de La Salle was canonized as a Saint. In 1950, he became officially recognized as a patron of all who work in education.

*****
Bread on the Trail: St. John Baptist de la Salle, Priest and Educator, found the poor in need of his help in his own “back yard”. He took the admonition of Jesus recorded in the 25th Chapter of St. Matthews Gospel to heart. He reached out to the “least of these”. In so doing, he reached out to Christ who is identified with the poor. He challenges each one of us to do the same. He was a man dedicated to excellence in his work for the Lord. Similarly, each one of us has been given gifts we are called to return to the Lord by offering them on behalf of His ongoing mission, as continued through His Body, the Church. Let us resolve this day to follow his example as he followed the example of Christ the Teacher.

Prayer: Father, may the example and teaching witness of St. John Baptist de la Salle inspire Christian teachers in our own time. May those who have give themselves to teaching children be inspired, as he was, by the Holy Spirit and offer their own gifts, both spiritual and natural to the ongoing work of the Lord.  May we learn from his example to teach and care for the young and never be discouraged when we experience opposition. May the great ministry and apostolate of Christian education be renewed in this new missionary age.