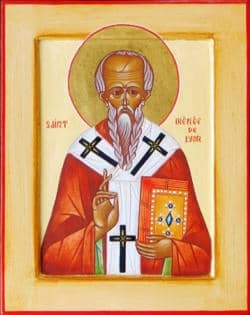 "For that which He [i.e. Christ] has not assumed He has not healed; but that which is united to His Godhead is also saved. If only half Adam fell, then that which Christ assumes and saves may be half also; but if the whole of his nature fell, it must be united to the whole nature of Him that was begotten, and so be saved as a whole"

Irenaeus was born in Asia Minor in the year 125. While a young man, he met the Bishop of Smyrna, Polycarp, (A.D. 69-155), who had known the Apostles. This meeting had a profound influence upon Ireneaeus. Through it he felt directly connected to the apostles. One finds this source of authority relied upon by Ireneaus at the beginning of his seminal work, "Against Heresies." In this work he confronts, exposes and opposes the writings of the "Christian" Gnostics, grounding his authority in his direct connection to the Apostles. For example, He speaks of the Apostle John as "He, the Lord's disciple, the very one who had rested on his breast (Jn 13:23, 21:20), (who) himself published a Gospel while he was living at Ephesus in Asia"

To Irenaeus, this Gospel of the beloved disciple John, like those of Matthew, Mark and Luke (which he also mentions in the same chapter) is the ultimate source of authority in confronting this heresy, because it is a direct witness to the teaching of the Lord Himself. He saw himself right within that tradition -with Polycarp, John and the Apostles - defending the truths of the Catholic faith against those who threatened orthodoxy and orthopraxy in his century. He noted that Polycarp had also encountered these same false teachers during his ministry in Rome: "He (Polycarp) it was who, coming to Rome in the time of Anicetus caused many to turn away from the aforesaid heretics (back) to the Church of God, proclaiming that he had received this one and sole truth from the apostles".

These Christian Gnostics (including people with names like Valentinian, Basilides and Marcion) taught an extreme form of body/soul dualism, that insisted that man was entrapped within the body, as well as within the material universe, as if in a prison. This prison was ruled by a "demiurge." Above the material world of the "aeons" and the cosmos, there was a God, though not a creator God as in orthodox Christian teaching. It was this other God who sent Jesus Christ as Savior. Jesus had not truly assumed a body of flesh in the Incarnation, nor did He truly experience death on the cross. He offered a different kind of "salvation", through imparting "gnosis", a Greek word which means secret knowledge. This secret knowledge enabled a select few men to comprehend and discern the struggle between evil and good, which was a struggle between matter and spirit, and engage in this struggle. The path to "salvation" was to become divested of both the body and the material world.

Exposing and opposing this errant re-interpretation of Christianity became a primary part of the mission of Ireneaeus. It led to the composition of Adversus Haereses (Against the Heresies). The full title reveals more clearly the massive effort, "Detection and Refutation of the False Gnosis." This work was borne of the challenges presented by this group of errant teachers. It’s positive teaching on the body, the unity and integrity of the whole human person, and its integrated approach to the fullness of the effects of the Redemption of the whole person in and through Jesus Christ, including the bodily resurrection, provides an ancient patristic ground within which we can position the late John Paul’s contribution to theological anthropology known popularly as "the Theology of the Body."

In the second century, these "Christian" Gnostics gained a following which threatened orthodoxy (right doctrine) and orthopraxy (right practice). The common thread connecting the various schools of this multi-faceted heresy was a negative view of both the material world and the human body. Matter was taught to be the source of mans struggle and difficulties in life. In claiming that neither matter nor the human body could be redeemed, the Gnostics preached what the Apostle Paul simply called "a different gospel".

It was to these serious challenges that Ireneaus addressed his treatise, directly, adeptly and adroitly refuting the claims of these teachers. In so doing, he also set forth an anthropology that affirmed the dignity of the human body and the redemption of the whole person in Jesus Christ, a positive soteriological (the understanding of the nature of salvation) vision, he called "recapitulation", which included the revivification of the human body by the Holy Spirit at the Resurrection. In other words, we shall be raised from the dead and given glorified bodies!

Recapitulation is a development of the teaching of the Apostle Paul, set forth in his letters to the early churches such as Ephesus, Thessalonica, Corinth and Philippi. It involves the restoration of everything in Christ, the one Head, the "New Adam" in which creation and all of humanity was first begun, and in whom, through the Incarnation, it has begun again. The Church is His Body, His fullness, and He is alive through His Resurrection. Membership in the Church is essential to the fullness of salvation. The Church is both visible and invisible. Within that Church, of which Jesus Christ is the Head, we are transformed by the grace of the Holy Spirit. To Ireneaus, the Word of God made flesh, the God-Man Jesus Christ, is the Alpha and the Omega, who unites the end with the beginning. He is the harvester of the seed that was sown in the beginning:

"For as by one man’s disobedience sin entered, and death obtained (a place) through sin; so also by the obedience of one man, righteousness having been introduced, shall cause life to fructify in those persons who in times past were dead. … He who is the Word, recapitulating Adam in Himself, rightly receives a birth, enabling Him to gather up Adam (into Himself), from Mary, who was as yet a virgin.”

*****
Bread on the Trail: Irenaeus of Lyons defended the completeness of Christ’s redemption in the midst of an age which had little respect for the full human person; body, soul and spirit. In our own age, “Gnosticism” has returned, even in some Christian circles. These modern Gnostics hold a negative view of both the material world and the human body. Matter is taught to be the source of mans struggle and difficulties in life. In claiming that neither matter nor the human body could be redeemed, the Gnostics preached what the Apostle Paul simply called "a different gospel" (2 Cor. 11:4). Let us renew our resolve to both study and live the fullness of the Christian faith and offer its full liberating message to the men and women of our own time who long to experience redemption of the full human person.

Prayer: Father, may the example and teaching of Irenaeus of Lyons inspire men and women who bear the name Christian to preach the full hope filled message of the Christian faith; the redemption of the whole human person. Raise up in day solid and mature theologians and defenders of the faith. Give ius good and solid teachers who will help us all to grow into Christian maturity and help the men and women of this age to find the Lord and His plan for their lives.