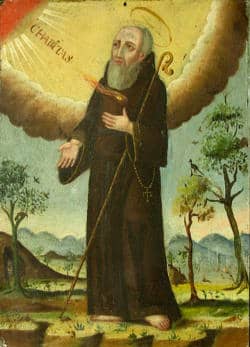 St. Francis of Paola, Hermit: Fix Your Mind on the Passion of Jesus

Fix your minds then on the passion of our Lord Jesus Christ. Inflamed with love for us, he came down from heaven to redeem us

On April 2d we celebrate the life of St. Francis of Paola in the liturgical calendar of the Church.

He was born in the year 1416 and given the name Francis at his Baptism. His admiration for and devotion to the “little poor man” of Assisi, Francis, inspired him his whole life. He is called Francis of Paola because that was the town of his birth, Paola in Southern Italy.

After being educated by the Franciscans, the followers of Francis of Assisi, and formed in Franciscan spirituality, the young man hungered for a simple gospel life. At the age of fifteen he left all behind and went to live as a hermit, turning his attention to prayer. It was a short-lived respite for the young saint. Like many holy men and women, the presence of the Holy Spirit had formed in him the character of Jesus Christ and this presence of the Lord soon attracted others to join with him.

In 1436 two of his companions sought to live the Gospel life with along with Francis and follow his example. Together they built a small monastery. That was the foundation of a religious community of men originally called the Hermits of St Francis. They devoted themselves to intercession on behalf of the whole Church and her mission in the world.

As time unfolded, Francis developed a “Rule” or way of life for the community which enabled them to live the Gospel, following what are called the “evangelical counsels” of poverty, chastity and obedience.” The community and its Rule were approved by the Apostolic See of Rome in 1506. That meant they were a trustworthy community, faithful to the Catholic Christian teaching. They took the name the Order of “Minims”. The name refers to their emphasis on of humility wherein they viewed themselves as the least of all.

The holiness of the founder of the community, Francis of Paola, was recognized not only by the Christian faithful but by those in high office. He was known to possess many gifts of the Holy Spirit. In particular he was said to be able to “read hearts”, possessing a gift of discernment. Francis was asked by Pope Sixtus to travel to France to pray with an ailing King Louis XI for healing. Though the King was not healed of his ailment and eventually died, the holiness of the saint changed the Kings family. His son and successor, Charles VIII, became a benefactor of the St. Francis of Paola. He helped Francis to build monasteries in France and in Rome for the brothers of the Minim community. Francis died at Tours in France in 1507.

This is an excerpt from a letter from St. Francis of Paola to his brothers entitled “Be Converted with a sincere heart”. It is taken from the Liturgy of the Hours, the official prayer of the Catholic Church, on his feast day, April 2.

Be Converted with a Sincere heart

"May our Lord Jesus Christ, a most generous giver, reward you for your labor. “Avoid evil, cast danger aside. Though we are unworthy, we and your brothers, never cease to pray to God the Father and to his Son Jesus Christ, as well as to Mary the Virgin Mother that you may receive everything you need for your spiritual and physical well- being. I earnestly admonish you, therefore, my brothers, to look after your spiritual well-being with judicious concern. Death is certain; life is short and vanishes like smoke.

Fix your minds then on the passion of our Lord Jesus Christ. Inflamed with love for us, he came down from heaven to redeem us. For our sake he endured every torment of body and soul and shrank from no bodily pain. He Himself gave us an example of perfect patience and love. We, then, are to be patient in adversity.

“Put aside your hatred and animosity. Take pains to refrain from sharp words. If they escape your lips do not be ashamed to let your lips produce the remedy, since they have caused the wounds. Pardon one another so that later on you will not remember the injury.

“The recollection of an injury is itself wrong. It adds to our anger, nurtures our sin and hates what is good. It is a rusty arrow and poison for the soul. It puts all virtue to flight. It is like a worm in the mind: It confuses our speech and tears to shreds our petitions to God. It is foreign to charity: it remains planted in the soul like a nail. It is wickedness that never sleeps, sin that never fails. It is indeed a daily death.

“Be peace-loving. Peace is a precious treasure to be sought with great zeal. You are well aware that our sins arouse God’s anger. You must change your life, therefore, so that God in His mercy will pardon you. What we conceal from men is known to God. , be converted, then, with a sincere heart. Live your life that you may receive the blessing of the Lord. Then the peace of God our Father will always be with you."

Bread on the Trail: Francis of Paola followed the Lord Jesus and gave himself over to the Christian way of life without reserve. As a fruit, the Holy Spirit worked through him to bring others into the fullness of that Christian way of life in the Church. His practical advice to his brothers on how to live as Christians in both word and deed cries out to each one of us today.

Prayer: Father, today I choose to follow Jesus Christ without reserve. I ask you to fill me with your Holy Spirit, guide me in the way prayer and use me in this age to bring men, women and children to conversion and sincerity of heart.