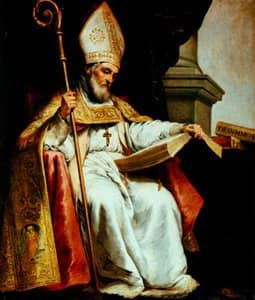 Saint Isidore, Bishop and Doctor of the Church

When we pray, we talk to God; when we read, God talks to us. All spiritual growth comes from reading and reflection

On April 4, Catholics the world over remember Saint Isidore, Bishop and Doctor of the Church. He was born in 560 in Cartagena, Spain to a family which made its mark on the Christian history of that Nation. He had an older brother who became the Bishop of Astgigi. His holiness of life led to his later being canonized as a saint.

He had a sister named Florentina who became a consecrated virgin and nun. Her holiness also led to her being later canonized as a saint. He had a brother who originally responded to the Lord’s call by becoming a Monk only to be made a Bishop of Seville by the faithful. sidore succeeded him to that office becoming the Bishop of Seville upon his brother’s death in 599.

These holy children were born of Severianus and Theodora. After their death, Isidore was raised by his brother Leander. He was well educated, studying at the first Cathedral School in Seville. There he mastered Latin, Greek and Hebrew as well as logic and rhetoric. He was an amazing scholar who turned his gifts toward the service of Christ and His Church. As a result, his spiritual writings appealed to all who hungered for a deeper understanding of the faith and a relationship with the Lord.

Isidore is credited with helping to lead the resurgence of a Christian Spain by rescuing it from the degradation brought about by a wave of barbarism which threatened the nation. He is considered to be one of the last of the ancient Christian Philosophers and Latin fathers of the Church.

This towering intellect had a major influence on the entire educational life of the Middle Ages. He was a profoundly effective Bishop as well. The Eighth Synod of Toledo (653) recorded its admiration of Isidore by proclaiming him "The extraordinary doctor, the latest ornament of the Catholic Church, the most learned man of the latter ages, always to be named with reverence, Isidore". He not only presided over that Church Synod in 644 but also over the earlier Synod of Seville in 619.

Isidore was a prolific writer who had a great love for science. He understood well that there is no conflict between faith and science, faith and reason, or faith and higher learning. He authored an encyclopedia, a dictionary, a history of the Goths and a history of the world. It was this capacity to arrange knowledge which led to his being declared the Patron of the Internet by the Venerable John Paul II.

Among his many beloved spiritual works is a “Book of Maxims”. This is an excerpt taken from the Liturgy of the Hours, the Official Prayer of the Church, on April 2 filled with practical wisdom:

The Scholar who is Learned about the Kingdom of Heaven

“Prayer purifies us, reading instructs us. Both are good when both are possible. Otherwise, prayer is better than reading. If a man wants to be always in God's company, he must pray regularly and read regularly. When we pray, we talk to God; when we read, God talks to us. All spiritual growth comes from reading and reflection. By reading we learn what we did not know; by reflection we retain what we have learned.

“Reading the Holy Scriptures confers two, benefits. It trains the mind to understand them; it turns man's attention from the follies of the world and leads him to the love of God. Two kinds of study are called for here. We must first learn how the Scriptures are to be understood, and then see how to expound them with profit and in a' manner worthy of them. A man must first be eager to understand what he is reading before he is fit to proclaim what he has learned.

“The conscientious reader will be more concerned to carry out what he has read than merely to acquire knowledge of it. For it is a less serious fault to be ignorant of an objective than it is to fail to carry out what we do know. In reading we aim at knowing, but we must put into practice what we have learned in our course of study.

“No one can understand Holy Scripture without constant reading, according to the words: Love her and she will exalt you. Embrace her and she will glorify you. The more you devote yourself to a study of the sacred utterances, the richer will be your understanding of them, just as the more the soil is tilled, the richer the harvest.

“Some people have great mental powers but cannot be bothered with reading; what reading could have taught them is devalued by their neglect. Others have' a desire to know but are hampered by their slow mental processes; yet application to reading will teach them things which the clever fail to learn through laziness.

“The man who is slow to grasp things but who really tries hard is rewarded; equally he who does not cultivate his God-given intellectual ability is condemned for despising his gifts and sinning by sloth. Learning unsupported by grace may get into our ears; it never reaches the heart. It makes a great noise outside but serves no inner purpose. But when God's grace touches our innermost minds to bring understanding, his word which has been received by the ear sinks deep into the heart.”

Bread on the Trail: F Saint Isidore, Bishop and Doctor of the Church, shows us the importance of grounding all of our study in a deep and profound relationship with the Lord who is the source of all truth. May we be inspired by his witness of following jesus and turn all of our own gifts over to the furthering of the work of the Church.

Prayer: Father, today I offer you the very intellect you have given to me. May my study be enlightened by your Holy Spirit so that I may be a fruitful instrument in this age so desperately in need of being liberated by the Gospel of your Son.