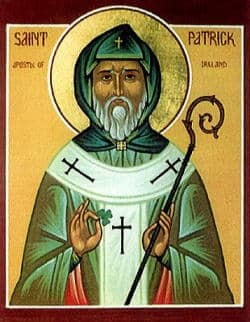 He was raised in a Christian home in Britain toward the end of the fourth century. This was an age much like our own, gripped by a “culture of death” and filled with a spirit of lawlessness. Tragedy struck Patrick at sixteen years old when he was kidnapped by Irish Pirates and taken to the Emerald Isle. This was the first experience he would have of the land that he would later come to love and for which he would give himself away in tireless missionary service. Upon arrival in this plush, green, breathtaking and beautiful land, he was sold as property to a petty chieftain who put him to work with his herds of swine.

Patrick could have become embittered. In fact, the reaction would have been understandable. Instead, he became holy. When this young man recalled these traumatic events in his marvelous work “The Confession”, he perceived the tragedy not as a victim but rather as a penitent:

“I was then about sixteen years of age. I knew not the true God; and I went into captivity to Ireland with many thousands of persons, according to our deserts, because we departed away from God, and kept not His commandments, and were not obedient to our priests, who used to admonish us for our salvation”
While he was a slave, Patrick recalled his Christian upbringing and turned back to that true God of whom he wrote so eloquently. He became a pilgrim, turning his captivity into a time of spiritual growth. He learned to walk the way of love. He wrote of that time:

“Now, after I came to Ireland, tending flocks was my daily occupation; and constantly I use to pray in the daytime. Love of God and the fear of Him increased more and more, and faith grew, and the spirit was moved, so that in one day I would say as many as a hundred prayers, and at night nearly as many, so that I use to stay even in the woods and on the mountain to this end. And before daybreak I use to be roused to prayer, in snow, in frost, in rain. And I felt no hurt, nor was there any sluggishness in me- as I now see because the spirit was then fervent within me”

After six years of unjust captivity, during which this pilgrim had become a mystic, Patrick escaped with the help of some friendly traders. He pledged that he would never return to Ireland. However, the God whom Patrick had fallen in love with had other plans for his life. In the middle of the night the Lord gave Patrick a vision which he recorded for posterity. Because he responded to the invitation contained in that vision, this wonderful man was used by the Living and true God to literally change the history of not only Ireland but the rest of the world:

“And there verily I saw in the night visions, a man whose name was Victorius coming as it were from Ireland with countless letters. And he gave me one of them, and I read the beginning of the letter, which was entitled “The Voice of the Irish”; and while I was reading aloud the beginning of the letter, I thought that at that very moment I heard the voice of those who lived beside the wood of Folcut, which is nigh unto the Western Sea. And thus they cried, as with one mouth: “We beseech thee , O holy youth, to come and walk once more among us.” And I was exceedingly broken in heart, and would read no further. And so I awoke. Thanks be to God, that after very many years the Lord granted to them according to their cry”

Through much perseverance, Patrick finally returned to Ireland, now an ordained servant of the Church of that true God. His “Confession” tells of his experience of being used to transform that beautiful land into a seedbed of Christianity through his evangelization and missionary work. The Pilgrim Patrick is a model for our age and for the new evangelization that we so desperately need. We live in a new missionary age. Patrick’s progression of faith must become our own.

Patrick chose to reject “victim-hood” and self-centeredness. Instead, he embraced the way of the Cross, carrying on the redemptive mission of Jesus. He fell in love with the Lord by developing a profound and transforming interior life, a personal relationship with God. He did this through deep, constant and abiding prayer. In this way of life, the Christian way, he learned to discern the voice of the Lord in his daily life, developed the eyes of faith and responded with perseverance to the call to become a missionary. Each of us is invited to do the same.

On March 17 every year the entire world pauses to remember Patrick’s life and his legacy, to rightly celebrate a full and meaningful life- and to honor to a beautiful country and people who have sent missionaries to the rest of the world to carry Patrick’s work forward through the ages, let us truly honor his memory by choosing to walk in His way. Like Patrick, let us follow Jesus Christ. Let us make Patrick’s wonderful prayer, which reflects his very real life, our own. Let us march into the Third Christian Millennium called, as was this wonderful saint and hero, to proclaim, demonstrate and live the Gospel:

*****
Bread on the Trail: St. Patrick of Ireland heard the Lord call him and responded with heroism and courage. A man of the Holy Spirit he continued to listen, even hearing his life’s vocation by paying attention to a dream. He persevered in his response to the Lord's invitation, ending right where the dream had directed him. He was a missionary who recognized the seeds of God’s truth even in a culture which had not yet heard the Gospel. With a strategy born of the wisdom of heaven, he reached out to the Irish people in love and led them to the Cross and the empty tomb. There they found the liberation they longed for and became disciples of Jesus Christ, sending missionaries around the world. As we consider his life and heroic mission, let us respolve in our own day, to become the kinds of men and women through whom the Lord can continue his redemptive mission in this hour.

Prayer: Father, may the example of St. Patrick of Ireland inspire men and women in our own day to respond to the call to mission. May his personal and dynamic relationship with your son and reliance on the Holy Spirit become a source of inspiration, leading us to deepen our own faith and follow in his footsteps in this new missionary age.