Losing faith is easy these days. It's hard not to, given the media flood surrounding us--One of fear, distrust, despair, anger, prejudice, hatred, destruction, finger-wagging, name-calling and pettiness. 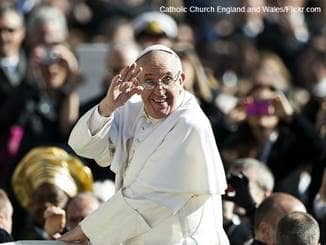 Losing faith is easy these days. It's hard not to, given the media flood surrounding us--One of fear, distrust, despair, anger, prejudice, hatred, destruction, finger-wagging, name-calling and pettiness. But as Pope Francis embraced American dignitaries, children, those in wheelchairs, the homeless, inmates, the non-religious, everyone, he brought with him hope that--in a day and age where the most popular view is that you have to show anger to accomplish anything--good old-fashioned love can actually, sometimes, win the day. We know that message. We learned it at an early age. But Pope Francis personifies it with an untainted and sweeping humility that lifts not only Catholics, but even atheists, out of themselves. He's unpretentious but direct. He's unpredictable yet always inclusive. He gently prods us to appeal to our best nature through Jesus' example. "Who am I to judge?" he said. The world and its problems are messy, but Pope Francis invites us to open our hearts to the possibility that the solutions don't always have to be.

He urges us to listen, to open new avenues of dialogue. In his address to the Joint Session of Congress, he said that we should guard against "the simplistic reductionism that sees only good or evil." He reminds us that fundamentalism exists in, and wounds, all religions, and that strongly-held beliefs, when mired in fear, self-righteousness, and inaction, become hollow. Speaking of immigrants and refugees, he said we need to learn, "not be taken aback by their numbers, but rather view them as persons, seeing their faces and listening to their stories, trying to respond as best we can to their situation...''

Living in a political climate where poverty and caring for nature are to be considered "hot button" political issues, I'm not naive. No doubt some have run back to their ideological corners, praising parts of what he said that jibe with their principles and arguing away the ones that don't. Observers have tried to label him, much like Jesus' critics did. But Jesus couldn't fit into a neatly-labeled ideological box, and neither does he. Pope Francis challenges us to see through fear and otherness by embracing our common human thread. He invoked Abraham Lincoln, Martin Luther King, Jr., Dorothy Day and Thomas Merton as exemplary Americans who worked for the common good. The latter two were hardly "perfect" Catholics in the traditional sense, and they were not at all alike. Catholics, after all, are a diverse bunch.

Among the 1.2 billion of us, it's at times tempting to feel cynical, confused and lost in a sea of opinion. However, without altering a bit of church doctrine, Pope Francis re-emphasizes and revitalizes what's most vital in the faith. He changes it from within, and warms us with the encouragement that each one of us can, and should, do the same. Through his mild example, the leader of the "universal" church has brought this almost two-thousand-year-old religion back to its simple roots--unconditional love, acceptance, and The Golden Rule. He's stirred something inside folks that transcends our man-made, invisible barriers. We've yet to discover Pope Francis' full and long-term influence. Until then, I'll marvel at the faith he's inspired within me during those few short days in our country. I'll try my best to help it grow, every day--by listening a little more closely, reaching out a little farther, hugging a little longer, and loving a little more deeply.