Pope Francis sees world peace as the ultimate goal, especially for the Catholic Church and for all Christians. 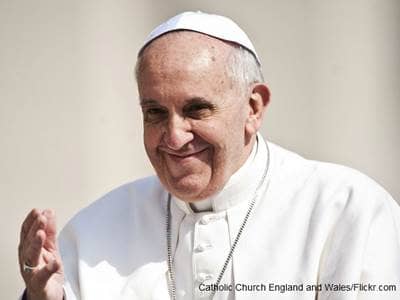 Pope Francis has often spoken out in favor of peace. In fact, the US Catholic Bishop’s website includes 6 full pages of the pope’s quotes on peace. To further the cause, the pontiff met with members of the “Peace Factory” on May 10th. The special audience included over 7,000 students, parents and teachers who gathered at the Vatican to discuss peace. Pope Francis stated that peace can only happen one person at a time by forgiving others, stopping injustice and ending greed.

During the discussion, an Egyptian boy asked why powerful people don’t help the schools. The pontiff replied, “Why do many powerful people not want peace? Because they live off war: the arms industry.” He added, “"When we see that everything revolves around money -- the economic system revolves around money and not around the person, men and women, but money -- so much is sacrificed and war is waged in order to defend the money.”

“The strict conditions for legitimate defense by military force require rigorous consideration. The gravity of such a decision makes it subject to rigorous conditions of moral legitimacy. At one and the same time:

- The damage inflicted by the aggressor on the nation or community of nations must be lasting, grave, and certain;

- All other means of putting an end to it must have been shown to be impractical or ineffective;

- There must be serious prospects of success;

- The use of arms must not produce evils and disorders graver than the evil to be eliminated. The power of modern means of destruction weighs very heavily in evaluating this condition.”

Pope Francis has also recently given guarded approval to war against ISIS extremists when speaking to a group of reporters regarding US airstrikes on Islamic State militants. "In these cases, where there is an unjust aggression, I can only say that it is licit to stop the unjust aggressor. I underscore the verb 'stop.' I'm not saying 'bomb' or 'make war,' just 'stop.' And the means that can be used to stop them must be evaluated.”

Yet Pope Francis sees world peace as the ultimate goal, especially for the Catholic Church and for all Christians: “The Church proclaims ‘the Gospel of peace’ (Eph 6:15) and she wishes to cooperate with all national and international authorities in safeguarding this immense universal good. By preaching Jesus Christ, who is himself peace (cf. Eph 2:14), the new evangelization calls on every baptized person to be a peacemaker and a credible witness to a reconciled life.”

Peggy Bowes, a devout Catholic, is the author of The Rosary Workout and co-author of Tending the Temple.