Is the Catholic Church changing its teaching on certain areas, especially regarding divorced and gay Catholics? 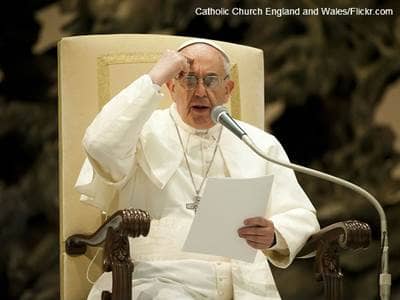 Pope Francis convened an Extraordinary Synod (special meeting) to discuss the family and how the Catholic Church can best minister to families and the challenges they face in the modern world. Also on the agenda are issues related to divorced, cohabiting and gay Catholics.

The synod began on October 5th and continues until October 19th. On Monday, October 13th, the synod released a document called the relatio post disceptationem (report after the discussion) which summarizes the debates held during the first week. This document created a firestorm and has raised questions as to whether the Catholic Church might change its teaching on certain areas, especially regarding divorced and gay Catholics. In fact, there has been so much buzz that Pope Francis’ press office released a statement on October 14th stressing that the relatio was a “working document” and that the debate among the bishops in attendance would continue throughout the remaining days of the synod.

So what was in the relatio that caused such an uproar? Following are the key issues discussed, with quotes from the actual document (published on the Vatican’s website). 1. Challenges facing the family


The Church “gets” that it’s not easy to keep families together and acknowledges the pressures of cultural and socio-economic change, the workplace, and a desire for solitude. There is a special concern for children, who are often the victims in the breakdown of the family, and for violence toward women. Overall, “the Church is aware of the need to offer a meaningful word of hope. It is necessary to set out from the conviction that man comes from God and… the great values of marriage and the Christian family correspond to the search that distinguishes human existence even in a time marked by individualism and hedonism.”

2. The idea of “gradualness” in salvation history
There has been much discussion over the past few days on the idea of “gradualness” as put forth in the relatio: “Through the law of gradualness (cf. Familiaris Consortio, 34), typical of divine pedagogy, this means interpreting the nuptial covenant in terms of continuity and novelty, in the order of creation and in that of redemption. Jesus Himself, referring to the primordial plan for the human couple, reaffirms the indissoluble union between man and woman, while understanding that “Moses permitted you to divorce your wives because your hearts were hard. But it was not this way from the beginning” (Mt 19,8). In this way, He shows how divine condescension always accompanies the path of humanity, directing it towards its new beginning, not without passing through the cross.”

In other words, the Church needs to meet people where they are and gradually lead them toward the Catholic ideal of sacramental marriage. Note that this does not change Catholic teaching but rather the way in which the Church leads people toward it. Regarding cohabitation, civil marriages and divorce/remarriage, “the Church turns respectfully to those who participate in her life in an incomplete and imperfect way, appreciating the positive values they contain rather than their limitations and shortcomings.”

3. Welcoming homosexual persons
The Catholic Church has always welcomed homosexual persons. After all, Catholic means “universal,” and Pope Francis made the now-famous quote last year, “If someone is gay, who searches for the Lord and has goodwill, who am I to judge?” Yet the relatio states, “The Church furthermore affirms that unions between people of the same sex cannot be considered on the same footing as matrimony between man and woman. Nor is it acceptable that pressure be brought to bear on pastors or that international bodies make financial aid dependent on the introduction of regulations inspired by gender ideology.”

The synod document does ask the bishops to realize that gays have “gifts and qualities to offer the to the Christian community” and to be especially sensitive toward children who live with same-sex couples.


It is again important to note that the relatio is a working document and that the synod is a fluid process which involves much debate and discussion. Not all members agree with the wording or the context of the relatio and some have been vocal in their dissent.

There will be a revised text of the debate issued on Saturday, October 18th. This text is not binding but will be a framework of continuing talks over the next year until the synod reconvenes in October 2015.

In conclusion, the words of Pope Francis in his homily for the opening mass on the synod, best conveys its overall objective: “We too, in the Synod of Bishops, are called to work for the Lord’s vineyard. Synod assemblies are not meant to discuss beautiful and clever ideas, or to see who is more intelligent… They are meant to better nurture and tend the Lord’s vineyard, to help realize his dream, his loving plan for his people. In this case the Lord is asking us to care for the family, which has been from the beginning an integral part of his loving plan for humanity.”

Peggy Bowes, a devout Catholic, is the author of The Rosary Workout and co-author of Tending the Temple.