Pope Francis: Message of Hope in the Midst of Abortion

Pope Francis does not deny the gravity of such sin; abortion is the negation of life. Yet, he extends mercy to those who ask for it. 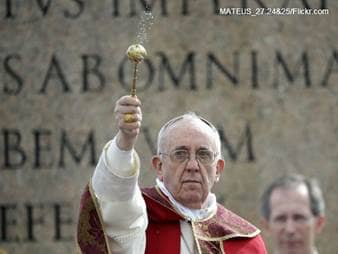 Pope Francis has extended mercy to those who have had abortions in the Holy Year of Mercy, which begins in December. For a year, priests will be given the authority, by the Pope (really the Holy Spirit) to absolve the grave sin of abortion for that year. Usually only a bishop may absolve a woman (or someone who has participated) of the sin of abortion. Pope Francis has extended this absolution for all priests to perform. What does this mean? Has the Roman Catholic church never extended mercy to those who have committed this sin? Has Pope Francis changed church doctrine? Is this another “liberal” move on Pope Francis’s part?

Abortion is a controversial subject in Western Civilization. Unfortunately, it is a controversial topic in the church as well. Yet, in the early church, the culture surrounding the Christians of that time would expose their unwanted children in the wilderness or on a mountain side and let nature take its course. Many Christians would take these children out of harm’s way and take them as their own.

When the fourteen thousand children were slaughtered by the jealous king Herod, John Chrysostom writes, “The mothers pleaded with the murderers, ‘Why do you butcher our children? What offenses have they committed against you or your king?’ But the soldiers were too busy in their work to reply. Nothing could calm the women, who were in a frenzy and cried out with ever-increasing desperation, ‘Mercy! Mercy! Have you no mothers? Do you not have wives? What if these were your children? Have compassion on us; slay us rather than our little babies. We cannot bear to see them destroyed! Take our lives first! Wet your swords with our blood! If these children have committed some wrong, put us to death with them.'

This is the self-sacrificial love of the gospel.

What happened to the mad, unjust king Herod? He died of dropsy in which his skin sloughed off and worms slowly devoured his rotting, stinking flesh. This was a man who did not repent, although, did he repent at his last breath?

The Book of Genesis tells the tale of the creation of all things, including life, (animals, plants, man and woman and all things in between visible and invisible). God created life. It is Roman Catholic doctrine that life begins at conception. Some scientists see this as truth as well, but others will argue other points where life begins, parsing the word itself.

When Mary visited Elizabeth, the baby inside Elizabeth leapt.

All of these images and sentences above point toward the loving God of life who is merciful and just. Again, all human life is sacred. “Human life must be respected and protected from the moment of conception. …A human being must be recognized as having the rights of a person—among which is the inviolable right of every innocent being to life. Before I formed you in the womb I knew you…Since the first century the Church has affirmed the moral evil of every abortion. This teaching has not changed and remains unchangeable” (Catechism 606). The Didache also known as the Teaching of the Apostles, a trusted first century Church source says, “You shall not kill the embryo by abortion and shall not cause the newborn to perish.”

The Catechism goes on to uphold the inalienable right to life of every human individual from conception; it must be treated as a person and defended in its integrity, cared for, and healed, as far as possible, like any other human being (Catechism 607).

Pope Francis, as the Vicar of Christ—in church doctrine, he is a symbol of Christ—is doing exactly what the church has always taught. He is extending the mercy and forgiveness of Jesus Christ to a population of sinners who need healing and wholeness—forgiveness of sin and new life.

Pope Francis is not denying the fact that abortion is a mortal sin. He is reminding the world that those who repent, no matter what the sin is, that Jesus Christ is full of mercy and forgives sin, including the sin of abortion. Francis is “instructing priests to both welcome women who seek forgiveness for terminating a pregnancy and reflect with them on ‘the gravity of the sin committed.’"

Being made and conceived in the image of God, as the Scripture says, means that a person is someone, not something (see the Catechism of the Catholic Church). The Catechism goes on to say that “the human body shares in the dignity of ‘the image of God.’” The unity of the soul and body is not insignificant: “Man, though made of body and soul, is a unity. Through his very bodily condition he sums up in himself the elements of the material world. For this reason, man may not despise his bodily life. Rather he is obliged to regard his body as good and hold it in honor since God has created it and will raise if up on the last day.” This goes for one’s own body, but also the body of another, our neighbor. And who is our neighbor? Our friend, our enemy, just a random person we see, the poor, and yes, the child and the child in the womb. Does not this teaching extend to all human life? The imago dei (image of God) explains why it is morally evil to murder and why some call abortion the murder of a child.

Again the Catechism: “Certain particular grave sins incur excommunication, the most severe ecclesiastical penalty, which impedes the reception of the sacraments…and absolution consequently cannot be granted, according to canon law, except by the Pope, the bishop of the place or priests authorized by them.”

Abortion is included in the category of grave sin. But to those who seek repentance and desire reconciliation with God and man, the whole purpose of penance is fulfilling the ministry of the Good Shepherd, who seeks his lost sheep … this is Jesus Christ himself. The declaration of giving authority to priests (in forgiving this grave sin) isn’t a leniency of Pope Francis. This is Jesus Christ himself administering grace and mercy to those who have been burdened by the sin of abortion and long to repent.

The Pro-Life movement has picked up quite dramatically in the past several years, especially in light of Dr. Kermit Gosnell and the current videos released about Planned Parenthood. There are many abortion “doctors” who have renounced their life as an abortionist and have become strong advocates of life. Centurions and CEC for Life are two ministries who excel in ministering to abortionists and those who have had the procedure done. There are many women who have had abortions and have repented and asked for forgiveness and go through healing ministry through their churches and other Pro-Life organizations. Priests for Life is another Pro-Life ministry who speaks with CEC for Life and many others in the mercy and forgiveness of God, who is life and who creates and gives life. Pope Francis is saying through this Holy Year of Mercy that, yes, abortion is a sin, a grave one, but God is merciful and forgiving to those who fall at God’s feet asking for grace and forgiveness.

Repentance and absolution of sin is powerful. It sets a person free. “The whole power of the sacrament of Penance consists in restoring us to God’s grace and joining us with him in an intimate friendship” (Catechism of the Catholic Church). Reconciliation with God is the purpose and effect of this sacrament. God is a just judge. We deserve death for our grave sin. Sin ruptures relationship and puts us at enmity with others and with God. Yet, God desires to restore the person, to make them whole and to extend mercy and forgiveness.

The image of God has been marred in us since the fall of man. By God’s grace in the act of repentance, penance, and reconciliation, the image of God in us is being restored. It is a shattered glass that is being put back together, the splintered shards and cracks reformed. New life administered.

In this declaration, Pope Francis is declaring hope. Where there is no hope, there is only despair. When in despair, one only ruminates on their wrong-doing, their sin, their short-comings, their failure. But hope blossoms within us new life. Coupled with faith and divine love, truly new life blossoms within a person. Pope Francis does not deny the gravity of such sin; abortion is the negation of life. Yet, he extends mercy to those who ask for it. He extends the hand of Christ to those who fall at his feet in weeping and repentance for sin, small and great sins alike, venial and mortal. Pope Francis is extending Jesus Christ’s divine love, hope, faith, grace, mercy, compassion and peace to those who call upon His name.

C. N. Dudek is a freelance writer and editor and has written for Examiner.com as the Baltimore Christianity Examiner. You can read more about him at On the Galilean Shores.