Pope Francis’ visit to the U.S. was highly anticipated, and he received a warm welcome from the White House, Congress and millions of Americans during the tour. This was not always the case before the 20th Century. 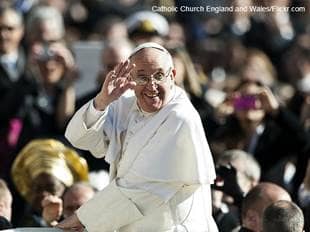 Pope Francis’ visit to the U.S. was highly anticipated, and he received a warm welcome from Congress and millions of Americans during the tour. Before the 20th Century hosting a pope at the White House was unheard of, let alone giving a pontiff a platform in front of leaders.

The reason was many frowned on Catholicism as this was not the main religion of America at the time. Some viewed the pope as a threat, especially with the flux of Catholic immigrants coming across the borders during the 1800s from Italy, and Ireland. There was also a fear that the Old World would collide with the new, and fringe on religious beliefs like in Europe, the reason the colonists came to the New World. Although there were people of the Catholic faith who framed the Constitution, it was a minority, Protestants were the majority.

U.S. Presidents met with popes in Rome. President Woodrow Wilson met with Pope Benedict XV in Vatican City in 1919, and President Dwight D. Eisenhower met with Pope John XXIII in 1959, but nothing like it is in present day. When John F. Kennedy was elected, and when Pope Paul VI visited in 1965 with Lyndon Johnson--icy relations started to melt.

Pope John Paul II was welcomed by President Jimmy Carter in 1979 on a whirlwind tour where the two shared common interests like faith, human rights, and a plan for world peace in a closed door meeting. Pope John Paul II popularity worldwide broke down barriers between the public and the Vatican. He returned to the U.S. twice before his death in 2005. His influence was unprecedented.

Pope Francis’ arrival at the White House Sept. 23rd was a reminder of how our nation has grown, and the reason America remains a beacon of light and hope for all religions.

“Mr. President, together with their fellow citizens, American Catholics are committed to building a society which is truly tolerant and inclusive, to safeguarding the rights of individuals and communities, and to rejecting every form of unjust discrimination,” Pope Francis said in his speech on the South Lawn. “With countless other people of good will, they are likewise concerned that efforts to build a just and wisely ordered society respect their deepest concerns and their right to religious liberty. That freedom remains one of America’s most precious possessions. And, as my brothers, the United States Bishops, have reminded us, all are called to be vigilant, precisely as good citizens, to preserve and defend that freedom from everything that would threaten or compromise it.”