Mother Teresa suffered with the those who were suffering. And in turn, her suffering in mind has brought comfort to us saints who doubt our faith, stumbling around as we do. 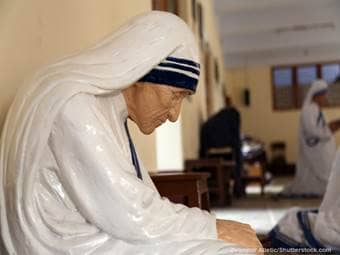 Mother Teresa was born in 1910 in Macedonia as Agnes Gonxha Bojaxhiu. Her father died when she was eight, so she became very close to her mother, who was a very pious woman. Her mother taught her to care for the least, the lost and the lonely at a very young age. Drana Bojaxhiu (her mother) extended an open invitation to the city's destitute to dine with her family. "My child, never eat a single mouthful unless you are sharing it with others," she counseled her daughter.

Agnes had the call to the religious life when she was 12, and when she turned 18, she joined a convent in Ireland. It was there that she took the name Sister Mary Teresa. After taking her vows, she was assigned to Calcutta where she would become a teacher. She taught the children of the poorest families in Calcutta. By 1944, she became the principal of St. Mary’s in Calcutta. But in 1946 on a train ride from Calcutta, she received the call to aide those who were sick and destitute in the slums of Calcutta. It took two years for her to start this new calling, since she had taken vows of obedience as a teacher. It was worked out and Mother Teresa took six months of basic medical training, she voyaged for the first time into Calcutta's slums with a goal to aid "the unwanted, the unloved, the uncared for."

Her work in the slums grew. Followers joined her in her work. Over the next two decades, she started a school, a leper colony, an orphanage, hospice, family clinics, and mobile clinics. Her Sisters of Charity grew worldwide after much acclaim and recognition.

Mother Teresa had a germ of an idea from God, which has grown into many fruitful trees.

Mother Teresa chose the little way. She heeded the simple call of caring for the least, the lost, and the lonely. She started small and cared for one person at a time. This is what we are all called to. To care for the one that is presented to us each day. Though Mother Teresa reached worldwide recognition, she remained humble. She remained true to her faith. She upheld unpopular tenants of the Catholic faith such as being pro-life. Some see this as controversial. But it is no surprise of a woman who cared for the least of these that she would uphold the sanctity of life. Life is the most important gift we are given. She cared for those who were seen as useless, dross, to be discarded. Some view a mass of cells who will become what we call a human as an inconvenience or not really life. But a life is a life. Whether a leper, a lame person, a disabled person, a child recently conceived. Mother Teresa saw each human life as sacred and beautiful and cared and had compassion on each one. She exemplified Christ in his compassion for each of us, who are also the least, the lost, and the lonely when separated from Christ. Mother Teresa showed the light of Christ to each person she encountered, even in their dying moments.

Now imagine, you have been serving the least, the lost, and the lonely—the bottom of the barrel according to the human condition—for fifty years. Would you not have moments of doubt in your faith? Would you not wake on some mornings and wonder if anything you did yesterday mattered or would matter today? Would comforting another person dying in your arms truly comfort that person? In Mother Teresa’s diary it was revealed she had doubts in her faith. She had dark moments, as though God was absent in the care she was providing or the love that she was showing. This is the way of the cross. It is a comfort to know that even Jesus Christ had a moment of crisis in faith as well when he shouted, “My God, My God, why have you forsaken me?” Is this not our cry in the darkest moments of our lives? At least that is what it feels like—that God has forgotten us. This language is riddled all over the Psalms, the greatest prayer book.

After fifty years of serving, there were times it all became mundane and seemingly worthless. But God truly honored Mother Teresa’s work. The way of sanctification is suffering and grace. All the great works that Mother Teresa did, did not save her. Redemption has come through the suffering and death of Jesus Christ. The suffering that Mother Teresa had in her thoughts was grace. These suffering thoughts caused her to turn to Christ in her darkest moments. In the book, The Diary of a Country Priest the main character (the priest) is declining in health and suffering quite a lot. But as his suffering increases, his spiritual growth increases all the more. I believe this is what happens to “spiritual giants” as some call them. The same is true for Mother Teresa. She suffered with the those who were suffering. She comforted those suffering. And in turn, her suffering in mind has brought comfort to us saints who doubt our faith, stumbling around as we do. But in suffering we are drawn closer to Christ who is our redemption.

Let us honor Mother Teresa for her fortitude to bring light to the suffering world. And honor her as a saint and Saint. She is one of many who points us toward Jesus Christ. Mother Teresa pray for us. Amen.

C. N. Dudek is a writer and editor and has written for Examiner.com as the Baltimore Christianity Examiner. You can read more about him at On the Galilean Shores.