The extraordinary power of the Rosary has resulted in many miracles.

In “Rosarium Virginis Mariae,” Saint John Paul II eloquently shared his thoughts and feelings about the beautiful holy devotion known as the Rosary. “The Rosary, though clearly Marian in character, is at heart a Christocentric prayer,” wrote the saint – who was then Pope John Paul II. He added “With the Rosary, the Christian people sits at the school of Mary and is led to contemplate the beauty on the face of Christ and to experience the depths of his love. Through the Rosary the faithful receive abundant grace, as though from the very hands of the Mother of the Redeemer.“

And the graces that we receive can bring us closer to Jesus. Whether it’s the strength and peace to get through a difficult situation, an increase in patience, the will to forgive or discernment for a vocation, they are all blessings that can change our lives. All of those personal graces can also, in turn, become blessings for others that can change their lives as well.

But did you know that praying the Rosary has saved lives? Did you know that it has saved souls in our world and in Purgatory? Did you have any idea that it could prevent violence and preserve freedom for an entire country? The extraordinary power of the Rosary has resulted in many miracles. Although there are countless miracles associated with the Rosary that we may never know about, there are some that are documented. Here are just seven astounding miracles associated with the Rosary.

Saint Dominic and the Albigensians

Saint Dominic and the Albigensians

In France in the 1100s and 1200s, the minds of Catholics were corrupted by heretics. The heretics, known as Albigensians, convinced many Catholics to kill themselves, so that they could be free from their bodies, which the Albigensians said were evil. Around 1214, Blessed Mother gave the Rosary to St. Dominic to defeat them and to stop the horrific lies they were spreading. Not only did he defeat them, he faithfully encouraged people to pray the Rosary to honor Jesus and Blessed Mother.

In “The Secret of the Rosary,” St. Louis De Montfort wrote about St. Dominic’s devotion. “As a reward he received countless graces from her; exercising her great power as Queen of Heaven she crowned his labors with many miracles and prodigies,” he wrote. “Almighty God always granted him what he asked through Our Lady. The greatest honor of all was that she helped him crush the Albigensian heresy and made him the founder…of a great religious order.”

Fatima Miracle of the Sun

Fatima Miracle of the Sun

In 1917, Blessed Mother appeared to three shepherd children – St. Jacinta, St. Francisco and Lucia – in the Cova da Iria in Fatima, Portugal, following visits from an angel who appeared after the children said the Rosary. Between May 13 and October 13 of that year, Blessed Mother appeared to the children six times. Not only did she ask them to pray the Rosary every day to bring peace to the world and to end World War I, she identified herself as Our Lady of the Rosary, and she held a radiant Rosary in her hands.

On October 13, 1917 – because Blessed Mother had promised Lucia that she would perform a miracle so great that nobody could doubt the apparitions – around 70,000 people had gathered to witness what is now known as the Miracle of the Sun. The crowd watched as the sun burst through the clouds – looking like a silver sphere that spun or danced in the sky. Its rays illuminated areas in brilliant colors. Then, it seemed to hurl itself toward the crowd, completely drying all the mud and rain-soaked clothing, before zipping back up into the sky. Some people were cured of diseases. Many others converted.

The message of Our Lady of Fatima also played a huge role in another miracle associated with the Rosary. In the early 1960s, Brazil’s president, Joao Goulart, was preparing to spread Communism throughout the country. It seemed inevitable that Communist rule would soon take over the country, as had happened to Cuba. But not everyone was willing to lose their freedom and succumb to likely defeat. Cardinal de Barros Camara told the people of Brazil that they could overthrow the threat by heeding the instructions of Our Lady of Fatima to pray and do penance.

Shortly after, Dona Amelia Bastos, a 59-year-old former schoolteacher and wife of a retired army doctor, gathered about 30 female friends and neighbors to form the first chapter of CAMDE (Campaign of Women for Democracy), a group that spread its message of peacefully fighting a Communist takeover to hundreds of thousands of women throughout the country. Many of them took part in Rosary rallies. One Sao Paulo rally was called the “March of the Family with God Toward Freedom.” It included more than 600,000 women carrying prayerbooks and rosaries as they marched with anti-communist banners, and it and other Rosary rallies played a central role in eventually overthrowing President Goulart and thwarting a Communist takeover with amazingly little military action needed.

In gratitude to God, the women of Brazil held an even larger march the day after they had succeeded in preserving their freedom. The march, which was called “March of Thanksgiving to God,” included more than one million people.

Salvation of a King

Salvation of a King

Praying the Rosary led to salvation for Alphonsus, King of Leon and Galicia. The king constantly wore a large rosary on his belt to inspire others to pray it and honor Blessed Mother, even though he didn’t pray it. One day, after he became so ill that it was believed that he wouldn’t live much longer, he had a vision. In it, he was being judged and was just about to be cast to hell, when Blessed Mother interceded for him.

St. Louis De Montfort described what happened next. In “The Secret of the Rosary,” he wrote “She called for a pair of scales and had his sins placed in one of the balances whereas she put the rosary that he had always worn on the other scale, together with all the Rosaries that had been said because of his example. It was found that the Rosaries weighed more than his sins. Looking at him with great kindness Our Lady said: ‘As a reward for this little honor that you paid me in wearing my Rosary, I have obtained a great grace for you from my Son. Your life will be spared for a few more years. See that you spend these years wisely, and do penance.’

When the King regained consciousness he cried out: ‘Blessed be the Rosary of the Most Holy Virgin Mary, by which I have been delivered from eternal damnation!’

After he had recovered his health he spent the rest of his life in spreading devotion to the Holy Rosary and said it faithfully every day.”

The Healing of The Rosary Priest

The Healing of The Rosary Priest

Praying the Rosary led to healing for Servant of God Fr. Patrick Peyton, who became known as the Rosary Priest. In 1938, after he had immigrated to the United States from Ireland but before he was ordained, he became very ill and was diagnosed with advanced Tuberculosis, which was incurable at the time. After his sister suggested that he pray to Blessed Mother for her intercession, he consecrated himself to Mary and began devoutly praying the Rosary. To the astonishment of his doctors, he was completely and miraculously cured, and he promised Blessed Mother that he would spend his life promoting the Rosary.

The popular priest, who coined the phrase “the family that prays together stays together,” encouraged many to pray the Rosary. He was one of the pioneering television evangelists who used the medium to further God’s Kingdom. In 1992, he passed away peacefully with a rosary in his hands, and he’s now being considered for sainthood.

Safety From Nuclear Blast in Hiroshima

Safety From Nuclear Blast in Hiroshima

In 1945, during WWII, eight Jesuit priests were living in a parish house less than one mile from where the atomic bomb was dropped on the town of Hiroshima in Japan. While the church next to the parish house was completely destroyed and thousands of people were killed and thousands of people suffered tremendously from radiation exposure, the house remained standing and the eight missionary priests miraculously survived. It was also miraculous and inexplicable that none of the eight Jesuits suffered from radiation exposure.

In the years following the blast, they were examined many times, and they lived for many years after it. When the priests were interviewed, they repeatedly said why they believed they survived and why they had not suffered from radiation exposure as was expected. They attributed their survival to the fact that they were living the message of Fatima. They said that they had prayed the Rosary faithfully in that house every day.

A Vision of Roses

A Vision of Roses

In “The Secret of the Rosary,” St. Louis De Montfort also wrote about a young friar whom he had learned about through the chronicles of Saint Francis. The friar prayed the Rosary every day before dinner. One day, he hadn’t yet prayed it when the bell rang for dinner, so he received permission from the monastery Superior to go to his cell to pray it before eating.

“After he had been gone a long time the Superior sent another Friar to fetch him, and he found him in his room bathed in a heavenly light facing Our Lady who had two angels with her,” wrote St. Louis De Montfort. “Beautiful roses kept issuing from his mouth at each Hail Mary; the angels took them one by one, placing them on Our Lady's head, and she smilingly accepted them. Finally two other friars who had been sent to find out what happened to the first two saw the same lovely scene, and Our Lady did not go away until the whole Rosary had been said.”

In the same book, St. Louis De Montfort also explained the meaning behind that miracle. “The word Rosary means ‘Crown of Roses,’ that is to say that every time people say the Rosary devoutly they place a crown of one hundred and fifty-three red roses and sixteen white roses upon the heads of Jesus and Mary,” the saint wrote. “Being heavenly flowers these roses will never fade or lose their exquisite beauty.”

What a gentle, sweet way to show our gratitude. Whether we receive graces as extraordinary as the ones mentioned in these seven miracles or we receive personal graces that improve our lives, praying the Rosary enriches our souls by bringing us closer to Jesus. And in our chaotic world, that’s the miracle that we need most of all. 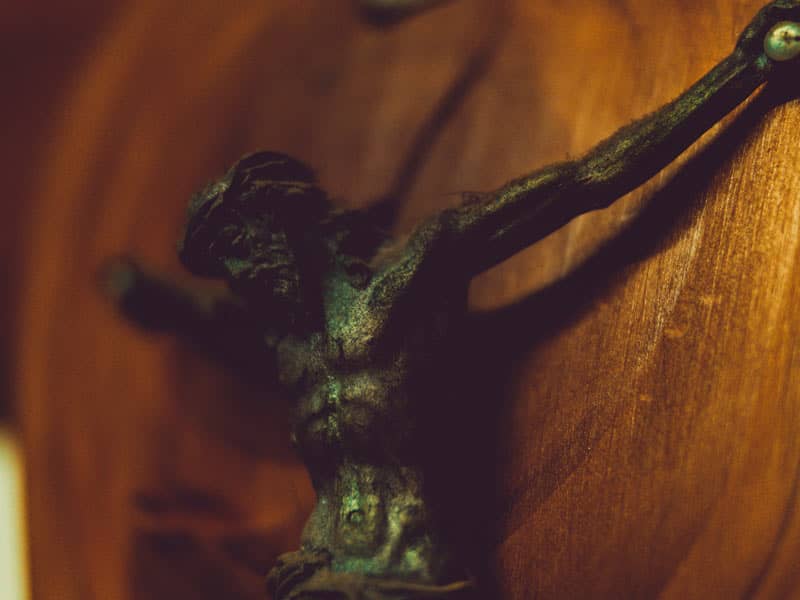 Advice From an Exorcist
In his new book, the highest-ranking Catholic exorcist in Washington DC tells us how to deal with demonic attack. Read next feature >
Christine Galeone is a freelance writer who writes regularly for Beliefnet, The Catholic Free Press, Community Advocate and the Telegram & Gazette. She also writes screenplays. You can learn more at http://christinegaleone.weebly.com.

More from beliefnet and our partners
Christine Galeone