We must confront a seeming contradiction in Christianity: Christ is both formidable judge and meek victim. 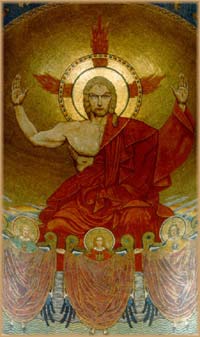 It's been nicknamed "Scary Jesus." It's a colossal mosaic, 3,600 square feet, titled "Christ in Majesty" that dominates the space above the altar of the great upper church at the Basilica of the National Shrine of the Immaculate Conception in Washington, D.C. The Jesus in the National Shrine mosaic is a huge enthroned figure with muscular bare arms and fierce, frightening blue eyes. It's the Last Judgment, the "Day of Wrath," in mosaic form.

Scary Jesus certainly seems to violate the canons of the Christian greeting-card industry. Many contemporary Christian images of Jesus depict him as a genial, ruggedly handsome figure who could be backing up the goalie in a junior-varsity soccer game or hugging teens on prom night. In much modern Christian iconography, Jesus is a nice guy whom Norman Rockwell could have painted for a Saturday Evening Post cover. Scary Jesus doesn't match that profile.

Furthermore, there is a disquieting paradox at work in "Christ in Majesty." The mosaic portrays Christ in judgment, as we might encounter him in the Book of Revelation. But doesn't the same book portray Christ as a lamb? Didn't the Word become flesh as a man who blessed the meek and who didn't fight back?

The image of Jesus at the National Shrine forces us to confront a seeming contradiction in Christianity: Our Lord is a just judge, a powerful vindicator, whose wrath is capable of consigning mortal sinners to hell; yet our Lord is as merciful and as meek as a lowly barnyard animal in its infancy.

Some people have tried to reconcile these conflicting images by making them sequential. Jesus was soft and tender in his First Coming, his incarnation as a human being 2,000 years ago, they say, but with the Second Coming the gloves will be off, and then it's no more Mr. Nice Guy. Well, this doesn't work--first, because the Gospels show us that Jesus did indeed vent his wrath on wicked men during his earthly life, as when he drove the money-changers out of the Temple, and second, because the Book of Revelation tells us that Jesus will be a lamb at the very consummation of human history, when God's servants will worship him at the throne of the Lamb in heaven.

So which image of Jesus should we contemplate? The Judge or the Lamb? Scary Jesus or Mr. Nice Guy? Which is the true Lord and Christ?

The truth is that we need not choose. The mystery of the Incarnation demands that we accept the perfect union of many seemingly paradoxical and incompatible things: The finite human body of Mary bears the infinite God; the eternal enters time; the sacrificial lamb presides on the Day of Wrath.

This is not a subtlety reserved for theologians. Dock workers and poultry keepers, washerwomen and seamstresses have known this since the birthday of the Church. Even those who could not read during those early days of Christianity knew this complex truth through icons and other images that displayed Jesus as ruler and also as victim on the cross.

In the eighth century a movement arose in the eastern churches to do away with sacred images. It was a movement of elites--intellectuals, theologians, and emperors. They thought that icons were an insult to God’s glory and majesty, which cannot really be portrayed. The transcendent God should be worshipped only with the intellect, they said. They received an imperial license to destroy the icons in the churches; and for this they earned the name "iconoclasts," image-smashers.

The saints, however, opposed these elites, and the saints prevailed. They called themselves "iconodules," or those who honor icons. And they argued that since God had condescended to take on flesh, the common people had the right to contemplate him enfleshed. The most eloquent of the iconodules, St. Theodore of Studion, wrote that Christ "does not abandon the exalted reality of his divinity, which is immaterial and cannot be circumscribed; and yet it is his glory to abase himself in such a noble manner down to our own level that now in his body he can be circumscribed. He has become matter, that is: flesh, he who sustains everything that exists; and he is not ashamed to have become what he has taken on, and to be called such."
The truth is that the iconoclasts despised the humility of God. He had scandalized them by assuming human flesh, by bleeding and dying, and they wanted him safely back in his heaven.

But that cannot be, because the Word was made flesh and dwelt among us--and he still has that flesh. He didn’t shed it the way a snake sheds its skin. He glorified that flesh and now offers it as love to the Father. What the face of the human Jesus revealed in the first century, the icon reveals in the eighth and the twenty-first centuries. Even when the icon portrays “Christ in Majesty,” it also portrays Christ’s humility. What is scandalous about the icon is simply the scandal of the incarnation, with all its paradoxes.

From the Last Supper onward, Christ magnified that scandal. The Word who became flesh willed that we should encounter his flesh in the appearance of an even more lowly substance, bread, in the Eucharist. Veiled from our view is his resurrection glory and his divinized humanity, and we won't see any more of that glory until he returns at the end of time. Then, as John tells us in one of his letters, “we shall see him as he is."

Of course there’s a sense in which we already see Jesus "as he is" in the Eucharist, for the lowly appearance of bread is as much the reality of Jesus as the glorious judge of the Second Coming. When Jesus rose from the dead, he didn't cease to be humble, and he'll never cease to show mercy--except to those who freely reject it, and he will respect that freedom for all eternity.

In another paradox, Christ in the Eucharist is just as much a king as he is a humble sacrificial victim. Luke's Gospel reports that at the Last Supper, Jesus told his disciples: “The kings of the Gentiles lord it over them...I am among you as the one who serves…that you may eat and drink at my table in my kingdom.” The kingdom of Jesus Christ will never cease to be exercised primarily in terms of love that is life-giving. Jesus has infinite divine power, yet his power is of a different order than the world’s idea of power, and the wrath of the Lamb differs significantly from human vengeance.

If we profess the real presence of Christ in the Eucharist, our human pride should wither when we go to Mass. On the one hand, as Paul reminds us in his first letter to the Corinthians, "[w]hoever…eats the bread or drinks the cup of the Lord in an unworthy manner will be guilty of profaning the body and blood of the Lord." On the other hand, Jesus bids us in John's Gospel to come forward and receive his body, even though we are sinners: "He who eats my flesh and drinks my blood has eternal life, and I will raise him up at the last day."

The last day. That is why, in the majestic mosaic image of Christ as ruler and in the Christ whose flesh I receive in the Eucharist, I see the same person: my sovereign Lord, who is also the Lamb who gives himself as bread so that I might live with him forever. I see him as my judge but also, and always, as my savior.