How our faith helped us cope with the worst event in our lives: the brutal murder of our little girl.

Beliefnet
Excerpted from Amazing Grace for Those Who Suffer with permission of Ascension Press.

"It can't be time to get up already!" I said sleepily as I felt Kathie get out of bed. I looked at the clock--5:00 A.M. As I dozed, I heard Kathie praying aloud.

"Good morning, Lord," she said softly. "May all I do, think, and say today be for Your honor and glory and that of Your Blessed Mother."

Kathie had the morning routine timed just right--making coffee, folding and bagging the newspapers for our daughters Susie and Katie--all before baby Josie would wake up.

Still lying in bed, I heard Kathie calling our children from downstairs, "Susie, Katie, it's quarter to six. Time to get up!"

Katie and Susie usually left the house at 6:00 A.M. for their paper routes, which took them about fifteen minutes.

Ten minutes later the phone rang. The caller had not received his paper.

"That's on Katie's route," Kathie said, knowing that our 11-year-old should have been home by then.

Even at this point, Kathie told me later, she knew something was wrong.

I jumped in the car, and as I drove the streets looking for Katie, I prayed, confident that she was safe. Yet the longer I looked, the more frightened I became.

I returned home and called 911, and while awaiting the police, I began praying silently to St. Michael, to Katie's guardian angel, and to our Blessed Mother: Please protect Katie. Lord, I know you wouldn't let anything happen to her.

I decided to drive Katie's route again, and this time, I saw out of the corner of my eye what looked like a carrier bag. I pulled into the driveway of a car wash. Oh, my God, it was a carrier bag! I began to tremble and begged God to protect Katie. I got out of the car, ran over to the bag, and recognized that it was Katie's. Oh, my God. There was blood all over the bag. I picked it up and put it in the trunk. I didn't want Kathie or the kids to see it.

On the way back to the house I was consumed with anxiety and fear. What could have happened? Maybe she is hurt and some kind person was taking care of her. But why didn't she call home? Or maybe she was taken to the hospital. Or maybe . . .

I refused to allow myself to consider the worst possibility. The Lord will take care of everything, I kept telling myself. And didn't He say, "Not a hair on your head would be harmed"? 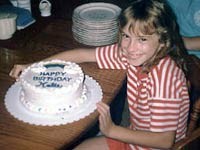 When the police arrived, I told them about the bag and took them to the place where I had found it. After dropping me back home, the police officers told us we would be kept informed.

A detective arrived shortly after 8:00 A.M.

"A short time ago," he began, "we got a call from a man who saw someone burying what he thought were stolen tools just a few blocks from here. When we investigated, we found the body of a little girl. We have not made a positive I.D., but . . ."

It's very hard to describe the darkest day of your life. Kathie and I sat on the couch weeping, alone with our pain and grief - a deep grief that sapped all our hope and strength and all that was good in life.

I wanted to die right there. But we had other children. Even in this moment of utter emptiness and hopelessness, we had to try to control ourselves as we thought of them.

We called the children together. We could see by the fear and sadness in their eyes that Theresa, Danny, and Susie were already thinking the worst. Paul and Maggie could not possibly understand what I was about to tell them.

We began to weep. We were helpless.

Our dear friend Father Larry Rucker arrived and called us together for prayer. This time we would not beg the Lord to bring Katie home safely, but rather pray for her soul and ask for the strength to draw another breath.

At 9:30 A.M. the police called to inform us that they had arrested a man with a history of sexual crimes. He was identified as the man trying to bury the body of our precious Katie.

The phone began to ring shortly after that. Friends and even strangers began to stop over. The news media also started to call, and camera crews showed up at the house.

I'm the oldest of ten children scattered all over the country, and I knew that each of them must be called. I asked the Holy Spirit to put the words in my mouth and began to make my calls.

We were trying desperately to make sense of everything. Jesus, where are You? We need You so very, very much. What we couldn't understand then was that He was there. He was with us in His priesthood, in His people, our friends, family, neighbors, and most of all, in our suffering.

In my bitterness I cried out to the Lord, "You could have saved her, but You didn't! I trusted in You, and You abandoned us! But who can we turn to if not You? There is no one else."

In my mind I saw the Lord's face in agony on the cross. I could see blood and tears dripping from His pain-wracked face, and I could see His heart was breaking in His horrible agony.

Oh, yes, Lord! You were there with Katie. Yes, Lord. I do know You love her more than we can comprehend. I began to surrender my despair to Jesus, trying to touch Him, to feel Him, knowing only He could make it all right. Only He could help us understand the mystery of this "valley of tears."

Another priest friend, Father Phil Elmer, talked to us about suffering.

"We can't always understand why these things happen," he said. "The mystery of evil has confounded theologians from the beginning of time. Sometimes all we can do is surrender it to the Lord, who alone can produce some good from this tragedy. I believe that somehow God is going to do something wonderful with Katie's suffering and death and also with your suffering.

"There is something more I'm going to ask of you. Maybe you can't do it today, but I want you to try. I want you to not only offer your sufferings to the Lord, but to also offer prayers of praise and thanksgiving to Jesus for the opportunity to suffer with Him. Unite your suffering with Him on the cross for the salvation of souls."

This was too much for me! Doesn't he realize we want the Lord to take this misery away? How can we "thank Him" for this? Something more precious than my own life has been torn from me and left all of us with an emptiness that cannot be repaired! And I'm afraid that even the Lord can't fix it.

As family and friends mourned with us, the story of Katie's death seemed to consume our city of a hundred thousand people. Reporters called wanting to talk to us.

"Mr. Clarey, the city needs to hear from your family," one reporter said. "We want to share our sympathy and to know more about little Katie." I consented to an interview, but with no cameras.

Two days after Katie's death, the reporter came to interview our family.

He asked us about our faith and how important it was to us at that moment. He told us he had interviewed Father Phil and many others, and the one thing that stood out was the unusually mature faith Katie had for her age.

"I understand you would go to the abortion clinic to pray?" he asked.

"Yes," I replied. "Katie could not understand how a mother could destroy her own baby, especially after the difficulty we had in bringing Josie into the world."

He asked all the children questions about Katie, then turned to Kathie and asked, "Do you have anything you would like to say to the man who killed Katie?"

We were taken aback by the question. Not once had we said anything about her murderer. Our attention was focused on Katie and her life and our faith.

Kathie slowly but deliberately said, "Yes, we do. We would like to tell him we forgive him."

The reporter stared in silence, then murmured something about how this could be possible. Kathie said, "It's what God asks of us. It might not be our way, but it is His way. We ask in the Our Father every day `Forgive us our trespasses as we forgive those who trespass against us.' We don't necessarily understand it, but we must trust in what Jesus tells us to do."

Later Kathie and I discussed what she had said about forgiveness. It was true. Not one of us said we hated the man who had killed Katie. We didn't even think about him. We chose to remember the joy of Katie's short life, not how she died. It seemed as if at least part of the burden and pain was already being lifted. We were experiencing the grace of God.

When we say we forgive the man who killed Katie, it's not a denial of what happened. It's not a denial of justice. Forgiveness is like love. It is an act of the will. Ultimately you surrender to Our Lord, and He applies the grace.

The phone began to ring the next day. "I just wanted to thank you for sharing your faith with us," the first caller said. "You gave me the courage to forgive my daughter-in-law."

Apparently our interview had been on TV. We had no idea that we had said anything profound. But the phone rang all day, with people thanking us, explaining their own difficulty forgiving a loved one, saying they now had the courage to do so, as well as assuring us of their prayers. We received hundreds of cards and phone calls with these sentiments.

We know suffering will come again in this "valley of tears." But God waits. He waits ever so patiently for us, saying: "Come to me, all you who are burdened, and I will give you rest" (Matt. 11:28).