Read a excerpt below from Yogi Cameron Alborzian's newest book The One Plan, A Week-by-Week Guide to Restoring Your Natural Health and Happiness. 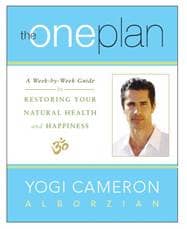 Out of the two dozen or so girls I was teaching, one of them wasn’t smiling.

When I smiled at all of the other girls—who were certainly shy in their own right—they at least smiled back. But not this one girl in a green shirt. This one seemed to think that she shouldn’t.

The girls at the Somaly Mam Foundation center proved to be attentive students. I took them through a sequence of yoga postures, breathing exercises, and even a meditation session, and they followed along wanting to know more and more. Rather than get competitive about the postures, they simply giggled and had a good time. And, when I welcomed questions at the end, one of them asked about what yoga was good for and another wondered why I did it myself. They seemed content to be there.

I said good-bye to them as they filtered out at the end of the Q&A, and joined the translator who had helped the girls and I to converse in putting the sewing machines back where they were supposed to be. Usually, the girls would be in that room making dresses and bags that could then be sold at market. We had had to push them off to the side so that we could have the class.

“There was one girl,” I said to the translator, “who seemed a bit more shy than the others.”

“She was wearing a green shirt,” I said.

“Yes, she had a particularly hard life. She was sold into prostitution when she was 11 and was often raped and beaten. It usually happens that way for the pretty ones.”

When I thought about it, the girl in the green shirt certainly would have attracted a lot of male attention because of how she looked. Of course she wouldn’t smile—smiling must have invited more problems than anything else.

I was in Phnom Penh to work with the Somaly Mam Foundation for about a month. This is an organization committed to rescuing girls and women from prostitution rings and other forms of sexual slavery. Its founder, Somaly Mam, was once sold into sexual slavery herself and after fleeing Cambodia she returned to begin this effort. The organization empowers its beneficiaries to become financially independent by teaching them skills such as hair styling and sewing. As of this writing, the Somaly Mam Foundation has rescued thousands of young girls and women.

The Yogic path teaches us that we exhibit violence toward another person whenever we say or do something that causes them harm. This includes actions as simple as yelling at someone, calling them names, or even acting friendly toward them with the sole purpose of getting something out of them. But it of course also includes the type of actions that these girls were subjected to: beatings, rape, and enslavement. The work we must do to reverse these types of behaviors is the act of nonviolence. In conducting ourselves nonviolently, we consciously set out to refrain from harming others with our words or actions. We instead foster love for all beings regardless of and even because of the violence they conduct toward us. Luke 6:29 says that to those who strike us on one cheek, we must turn the other to them as well. Ahimsa works in a similar way. Somaly Mam lives her life by this ethic, and her organization taught this idea to the many shy smiles that greeted me when I arrived.

On the whole, these young girls didn’t seem to have any major problems and also didn’t seem to perceive themselves as victims. They didn’t exhibit violence toward their captors in response to what they had endured by their hand. I didn’t go there with an idea that I was helping them, for that would simply have been my being nice in order to get gratification out of it. Instead, I offered them tools based on how I have devoted myself to practicing them every day. My act of nonviolence wasn’t to go and help, but rather to be open to them whether they responded to the tools or not.

On the last day I was there, I enjoyed a friendly, familiar rapport with the girls. They might have thought they were connecting to me, but the work itself simply empowered them to connect to their own spirit. And, because I sought to perpetuate an intention of nonviolence, we created a safe environment in which it was okay to be open to others.

For that’s exactly how the girl in the green shirt was when she finally offered me one of the most dazzling smiles I had ever seen.

Yogi Cameron Alborzian left the world of high fashion to seek the higher path available to all of us. In 2003, he began his ongoing studies in Ayurveda at Arsha Yoga in India after completing the training at the Integral Yoga Institute in New York City. Since then Yogi Cameron has worked with clients throughout the world to provide them with methods to live healthier, greener, more spiritually-minded lives in accordance with the Ayurvedic and yogic path.

He presents his clients with a variety of Ayurvedic and yogic therapies, diet guidance, and herbal remedies to both treat specific conditions as well as set them on a path to greater mental, physical, and spiritual health. A primary goal of this path is helping each person find their purpose and practice.

His newest book The One Plan, A Week-by-Week Guide to Restoring Your Natural Health and Happiness will be available in bookstores January 8, 2013. You can find Yogi Cameron on Facebook and Twitter.